This year has been a year of (re)discovery of comics for me. There are several reasons why that is happened. One is that Zoe from Playing by the book have been talking comics a lot this year. The other is I have discovered a complete new (to me) genre in comics writing, whether it is for children, teen or adults (I had already read a lot of something similar, but in manga form. In manga terms it is known as Shōjo, which defines Japanese comics which focus on personal and romantic relationships, the difference being that most Shōjo comics are primarily aimed at female audiences).  By this genre, I mean books such as  Jane, the Fox and Me (reviewed here),  Smile, Sisters and Drama by Raina Telgemeier and This One Summer by Jillian and Mariko Tamaki. And of course El Deafo. 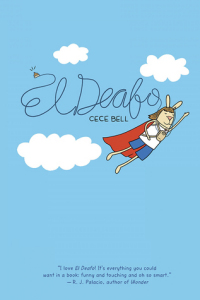 At just four years old, Cece’s life changes forever when contracting meningitis leaves her with a severe hearing impairment. After the initial hardships of her adjusting to her new life and a new rather large hearing aid, Cece blooms when she starts kindergarten in a class where all the children are in a similar situation and know how she feels. But eventually she has to start elementary school, and face the prospect of being “different”, with all the challenges it brings, particularly when it comes to making, and keeping, friends. Cece soon realises however that she has one advantage over all the other students in her class, a superpower so to speak, which might just change her life at school forever.

Capturing and conveying  the emotions of what it is like to be “different” is  no easy task and graphic novels is not the format most people would think would deliver this successfully. Yet I dare any reader not to be profoundly  moved by this inspiring, gut-wrenchingly moving and funny memoir of a girl who knows exactly what it is like to be “different”. Cece Bell tells us of her childhood with sometimes brutal honesty, and young readers will love her for it. She does not shy away from the hurt and the pain, but there is also much mirth in this book.  El Deafo is so special because it succeeds at both inspiring story for those who are “different”, and offering a genuine insight on how it feels to be the one kid who is not like the others for those who do not know what it’s like.
The universal woes of friendship, so omnipresent in young children’s lives are recalled with candor, particularly with Cece learning to manoeuvre the politics of friendship groups. El Deafo is about growing up, finding one’s place in the world and learning to understand oneself, and every child will relate to that.  This, teamed with the appealing, child-friendly artwork will make El Deafo an instant hit with its targeted audience. For me, however, El Deafo is so much more than a great  graphic novel for children. It is an accomplished, wondrous piece of children’s literature, and with the quality of work in this format published these days, it is high time we start seeing graphic novels as such. 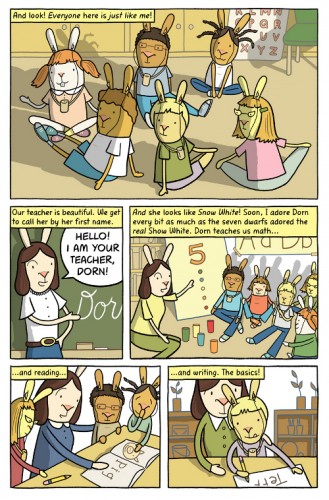 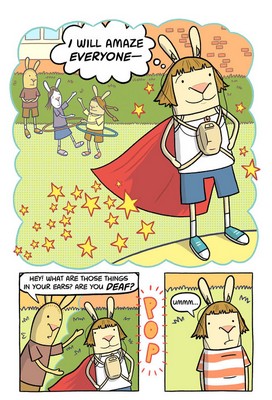 You can watch Cece Bell talk about, and demonstrate, the Sonic Ear, in this video: