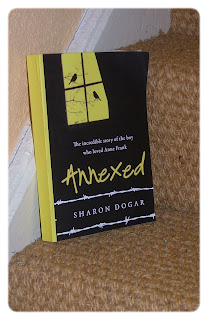 Everyone knows Anne Frank’s story, her life hidden at the top of those stairs in Amsterdam, and her untimely death. 31 million copies of her diary, which is translated in 67 languages, have been sold across the world. So we know the story, HER side of the story. But the Franks were not alone in the annexe; the Van Pels were there too, with a son, Peter, a few years older than Anne. In this new book from Sharon Dogar, we see the same story unfold, but through Peter’s eyes this time. His experience in the annexe is very different from Anne’s, whom he despises at first, but slowly learns to love. Peter’s story, however, also takes us further, beyond the families’ betrayal and on to the camps, to the very end.

Dogar has faced huge criticism and the wrath of the Anne Frank Foundation for this book. Should authors be allowed to “play” with history for the sake of their art? After reading The Boy in Striped Pyjamas, I would have categorically said NO, because you cannot “play” with something as sensitive as the Shoah, especially to make it into something that could not possibly have ever happened. But that’s the difference here. We know that it could have happened, and we know for a fact that it did actually happen. Dogar is only retelling a story that we all know, but from a different perspective. I certainly did not think at any point that she was stepping out of line, or pushing her luck. In fact, she is particularly meticulous, with footnotes pinpointing differences with the journal’s side of the story and explaining her choices. So what is the problem? Is it because Anne Frank has been nearly literally canonised (ok maybe that’s the wrong word, “glorified”, then) to the point that people do not want to see her as she most likely really was: an over-confident, abrupt, judgemental and very much sexually frustrated young girl, who had to spend the most challenging of her teenage years with constant scrutiny from others, and with no hope of privacy? I wish I’d read The Diary of Anne Frank again before reading Annexed to remind myself of how she wrote (I read it in secondary school, a longer time ago than I am willing to admit). But I do know (and Dogar reminds us in her story) that she was hoping the her diary would be published, so how can Dogar’s critics be so sure that it is the real Anne Frank that we saw through her own writing, as she was most certainly writing for an audience as well as herself?


I also wonder whether critics were shocked by the fact the Peter is so desperate for his religion not to define him; he does not want to be remembered as simply “Jewish”. Anne strongly disagrees, and it is in fact the downfall of their relationship. But this side of Peter is what I most sympathised with; he is so desperate to be “more”.


The last part of the novel takes place in the camps. The author reminds us that the fate of both the Franks and the Van Pels is poorly documented and that she drew from other inmates’ stories and experiences to tell what she thought might have happened to Peter. I think this works too; Peter’s story is just a universal story. It could be anybody, and it represents everybody.


This is no easy read. I’ll admit I am one to shy away from anything to do with the Shoah usually. I have studied it, I have a husband who organises a yearly school trip to Auschwitz. But I never seek to know more. In fact the truth is, I can’t bear it; I can’t bear to think that the human race can be that twisted and cruel. I look at my own children and remember the millions of children their age that were simply disposed of. It is unthinkable really. So we need books like this sometimes. Just to remind us.