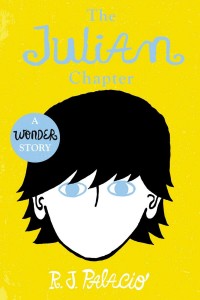 I don’t usually review ebooks because I don’t actually read them. But The Julian Chapter is only, at the moment anyway, available as an ebook so here it is, a first on Library Mice.
I loved Wonder, R.J. Palacio’s first book, and you can read my review here to give you a flavour of the book if you have not already read it. Wonder tells the story of Auggie, an ordinary boy with an “extraordinary face” and the challenges he faces as he starts middle school after years of homeschooling, and the effects his presence has on all around him.
The Julian Chapter is Julian’s, the classroom bully, side of the story as he recalls his own insight into the events that took place in Wonder.  And what a story it is. The Julian Chapter is a brave book, because telling the story of a bully is not an easy tale to tell. It is at times infuriating, frustrating, cringe-worthy, but also heartbreaking, heartwarming and so, so full of understanding. Readers are witness to Julian’s unforgivable vendetta against Auggie, his infuriating lack of repentance, his utter defiance, but also his eventual awakening, his slow realization of the error of his ways, and that is truly heartening. What is particularly interesting about The Julian Chapter, and is also another brave move, is how the finger is, indirectly, pointed at Julian’s parents, who, while never encouraging his behaviour, never really actively discourage it. It is only while away from his parents that Julian begins to understand the repercussions of his actions, with the help of his rather eccentric French grandmother, whose own story will not fail to move readers to tears.

Readers will have hated Julian in Wonder, and will expect to do so when reading this novella too. Even though his callous attitude is well and truly present throughout most of the tale , and his emotional awakening comes very late into the story, it does come and with that, readers will undoubtedly feel warmer and more understanding towards him. It is not to say that Palacio finds excuses for his bullying, because it is clearly not the case, and not the purpose of this book. However,  everyone deserves to tell their story, and this is an important, beautiful story to tell. Readers, just like Julian did in this book, will hopefully learn to change their perspective towards him and choose kind too.

Random House Children’s Books  in association with the Anti-Bullying Alliance have just launched a nationwide anti-bullying campaign in UK
schools. Inspired by  Wonder,  the initiative aims to stamp-out  bullying and inspire students to CHOOSE KIND.

The CHOOSE KIND initiative is open to UK primary and secondary schools.  Participating schools will receive a free copy of Wonder and resources to help them to promote anti-bullying.  They will have the opportunity to enter a competition to win RHCP books, library accessories and a Wonder party. Entries will be judged on how the schools have inspired students to choose kind.