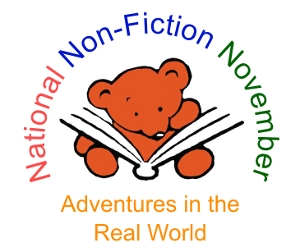 Today I am delighted to be hosting a guest post as part of  30 days of adventures in the Real World . And what a guest post too! I am chuffed to welcome Laurence Rickard to Library Mice, a British actor and writer who many of you will know for  being one of the principal actors on Horrible Histories , as well as  one of its writers and lyricists , and for  Yonderland, which he co-created, co-wrote and starred in alongside five member of the Horrible Histories cast.

The importance of non-fiction
by Laurence Rickard

As a comedy scriptwriter, you might expect that my young imagination would have been fueled entirely by flights of fancy – by fiction. Strangely, whilst I loved C. S Lewis and Roald Dahl as much as the next kid, I tended to skip the prose and only read the dialogue, which probably explains why I went on to write scripts rather than novels… And certainly explains why I struggled to follow Prince Caspian. In fact, the only books that I always read from cover to cover were non-fiction.

As the factual books I’d choose would echo my growing interests and passions, be it dinosaurs, trains or spies, my desire to learn more always drew me in from the very first word, and fed my enthusiasm right through to the very last. And never was that more true than of these two books, both of which stick in my mind to this very day. 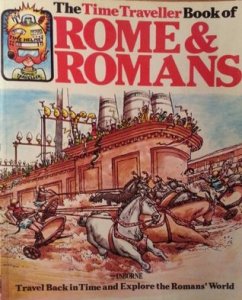 Engagingly written, lavishly illustrated and taking in both the cultural elements (poetry and winemaking) and visceral elements (men fighting bears) of Roman society, this book felt so immersive that I remember it as being at least three times bigger than it actually is. It seemed like a whole world that you could climb inside – as though, just like the title claimed, you were a ‘time traveller’. It inspired a love of history that, many years later, would feed into my career, most notably on the Horrible Histories TV series. In fact, in an early meeting to discuss the show, I remember chipping in with some Roman factual tidbit for which I never credited an academic source. I would like to, very proudly, correct that omission right now – it was from the The Usbourne Time Travellers Book of Rome & Romans. 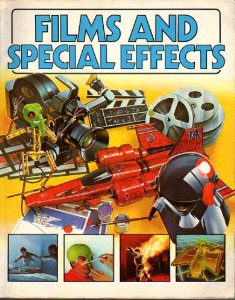 When I left my Junior School, there was a scheme which rewarded students with a duplicate copy of their favourite book from the school library. In another eerie portent of a career to come, I chose this one. And I absolutely adored it. In a world before computer generated effects, this was an exhaustive introduction to the practical wizardry that made the most beloved films of my childhood possible. I now saw how the illusions were possible. I was looking behind the curtain and, far from robbing me of that ‘movie magic’, it made me appreciate it all the more – the skill, the craft, the ingenuity. To this day, whether working with the puppets on Yonderland or making a feature film, as soon as someone says ‘model shot’, ‘green screen’ or ‘prosthetic make-up’, the first thing that comes to my mind is an illustration from this book. It made me the film enthusiast that I am today, and for thank I thank it profusely.

I suppose, in essence, what I’m saying is that, thanks in part to non-fiction books, I made most of my career decisions at ten years old. A tactic that I would heartily recommend to anyone.

Thank you so much for this great post, Larry!