Fuzzy and Coco the guinea-pigs live a rather uneventful together since their respective owners have got married. Coco likes to spend her time pampering herself, while Fuzzy spends his time cooking and is desperate to become a chef. When Fuzzy discovers that celebrity chef Scarlet Cleaver’s ad in the paper that states “Guinea Pigs Wanted”, he thinks his dream has come true and is off on his new adventure. But Coco is not so sure, and when Fuzzy fails to come back, she soon works out that Scarlet might have some more sinister plans for the guinea-pigs. With the help of some fellow furry friends, including rather dashing Eduardo, Coco sets off on a rescue mission to stop Fuzzy to become a very special restaurant guest’s meal. 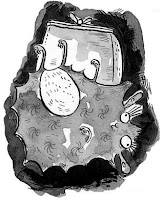 There is something wacky and totally out there about the storyline Guinea Pigs Online but that is exactly what gives its charm. The crazy situations that those guinea pigs put themselves in, their clueless owners, the despicable behaviour of Scarlet Cleaver, and the eventual appearance of the Queen, will have little readers in stitches. There is a little bit of peril in there, enough for the storyline to get exciting, but still tame enough that young readers will, hopefully, not dream of Scarlet Cleaver coming after their guinea-pigs!
The text is quite large and broken down by the artwork making it manageable for newly independent readers, though despite its attractive small and chunky format, this book is slightly longer than most of the books on offer for this age range so might be worth holding on to until readers are bit more confident and have developed some stamina.
Sarah Horne’s illustrations add to the mischief and capture the personalities of the guinea-pigs very well.

Guinea Pigs Online is great fun, but there is a more serious message however about the dangers of arranging to meet strangers that one has encountered over the Internet. Though one might think the targeted audience may be a bit young for this, children actually start learning about Internet safety at infants school, so hopefully this will reiterate this crucial message.

A sequel, Guinea Pigs Online: Furry Towers, is due in November. There is also an accompanying website, which well worth checking out, and includes a Be Safe Online page.

Once they are ready to move on, little readers who have enjoyed Guinea Pigs Online will love Katie Davies’ hilarious Great Hamster Massacre series (see my review of the first book in the series here)