At this year’s FCBG conference, I was delighted to meet Abie Longstaff at last and had the pleasure to attend the seminar she led on her Fairytale Hairdresser picturebook series. It was a truly inspiring talk, explaining and illustrating how her fairy tale had come to life and how much thought had gone into every single detail of the series. I found it so fascinating I asked Abie if she would mind writing something similar as a guest post for Library Mice, and much to my delight, she accepted. So here it is, enjoy!

I love fairy tales. I’m so lucky that I get to play with a well-known story, passed down through the generations over hundreds of years. For me, fairy tales are more than boy-meets-girl romances; they are stories echoing eternal themes of adventure and survival, and the triumph of (usually) a girl overcoming horrendous circumstances to achieve a better life.

But it can be a challenge to make an old tale contemporary and relevant, and to bring it up-to-date.

In my Fairytale Hairdresser books I wanted to create a world that felt familiar to children, yet retained a community at its heart. In Fairyland, there is a high street of shops: the Tooth Fairy is a dentist, The Three Pigs have a construction firm and the Big Bad Wolf is the optician (all the better to see you with).

I wanted modern girls; girls with choice. Some of the girls in my books want to find a husband and make a family, some want to marry and keep working, and some just enjoy working.

My main character is a business woman. Kittie Lacey owns the salon in town and she is the centre of every story, the facilitator and the problem-solver. She is calm and brave; a big sister figure who listens to everyone’s worries, and her salon is at the heart of the community.

When I read the books in schools and bookshops I find that, although the children love hearing about Rapunzel or Cinderella, they want to be Kittie Lacey, the hairdresser. They want to run the business and walk through Fairyland and go on her adventures. They want to hang out with her at her cool salon and chat to princes and fairy godmothers and princesses and Mr Gingerbread Man.

In keeping with the theme of equality, my Royal characters are not haughty nobles – they have jobs like everyone else (in Sleeping Beauty Prince Florian is a gardener, in Snow White he is a doctor) and they wear normal outfits, fitting in with everyday life…

…and I have a range of characters in my books from all over the world, both able and disable-bodied so that children can find someone in the story who looks like them. 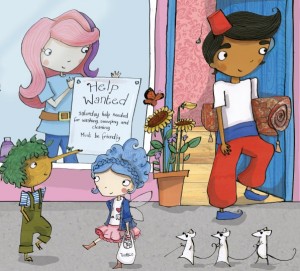 Boys love my books too and I make sure that everyone has a chance to have their hair done in the salon!

In traditional tales there’s a lot of emphasis on looking good (especially in the Disneyfied tales). Cinderella, for example, has to dress up and look rich to get her man, so much so that in her true form she is unrecognisable and has to prove her identity by fitting into the glass slipper! One theme that I wanted to run through the Fairytale Hairdresser books is the idea of being loved and respected for who you are. In my Cinderella the Prince meets her when she is poor and he loves her then, and after her marriage we see Princess Cinderella back in her ordinary raggedy clothes with her prince happily beside her.

The characters wear normal clothes except when they want to dress up for fun, for themselves. And, just like in real life, people can be intelligent and hardworking and serious, yet still want their nails done – these things are not incompatible.

Stories usually reflect the norms and culture of the time they were written. So, in old tales, often the baddie’s ending is gruesome: in Snow White the wicked Queen dances in red hot shoes till she’s dead; in Cinderella the step-sisters’ eyes are pecked out by birds. I wanted to update the culture and the world, as well as the plot.

In my books, the baddie goes to jail. I think the way a country punishes offenders tells you a lot about its values and I want my bad characters to have a fair, proportionate and legitimate criminal justice system (can you tell that in my day-job I work for a policing charity?)

I’ve tried to build a sense of community, where characters help one another out and friendship is valued.

My town has its own, modern-day culture. There is a magazine, The Looking Glass…

And in every book the high street changes a little as new shops are built.

But what I want to achieve in my books most of all is a sense of friendship and laughter and struggle and achievement and adventure and love. These are the elements that connect us. They are eternal, stretching beyond our lifetime reaching past and future generations – like all good fairy tales.

Thank you so, so much Abie, for such a fascinating glimpse at the fairytale world you and Lauren Beard have created. I am certain  readers will want to go back to all four wonderful Fairytale Hairdresser books after reading this captivating insight. 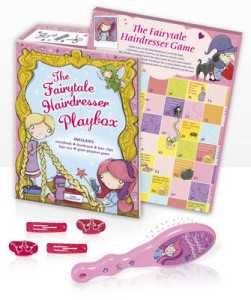 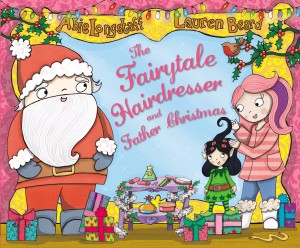 In the wake of Richard Dawkins’ recent comments about fairy tales (you can read an article about it from leading fairytale academic Marina Warner here), Abie was invited to talk about fairy tales on the Channel 5 News on June 5th: