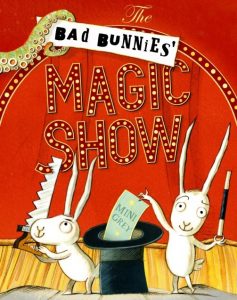 Hurrah, Mini Grey is back! The Bad Bunnies’ Magic Show (Simon & Schuster Children’s Books) introduces readers to a new team of anthropomorphic animals, this time a duo of rather naughty bunnies (aptly named Abra and Cadabra) who are so desperate to try their paws at magic, they conveniently get rid of the star of the Magic Show,  the Great Hypno and take his place. Their show turns to be of the daredevil kind, and things seem to be going from the precarious to the seriously dangerous and it is only thanks to one of their ‘victims’, the lovely Brenda (who Mini fans will remember from her Traction Man adventures) escaping, that their car-crash of a show is stopped and suitably punished by a a newly freed Hypno. But have Abra and Cadabra learnt their lesson? Hmmmm ….
It would be very hard to describe a Mini Grey picturebook without having one in one’s hands, such is the richness of her artwork. There is so much going on, so much to pore over and both text and artwork are so multilayered that every reading experience is a new one. Built as a novelty book with flaps, this allows to emphasise not only the dramatic tone of the story, but recreate the scene of a stage magic event. Clever play on words as well as visual jokes will keep older readers as entertained (if not more!) as the younger audience. Play with typography also encourages the text enabler to use voices. It is clever,  mischievous and magical; the perfect performance. 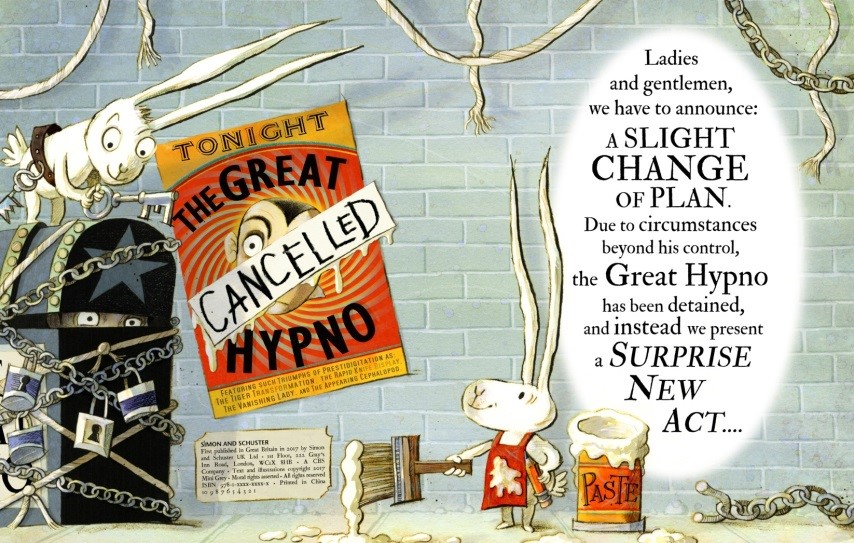 I was thrilled to be able to ask Mini a few questions about The Bad Bunnies’ Magic Show. 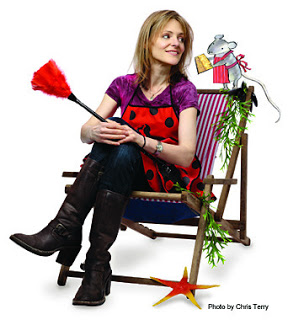 Hello Mini
I am so delighted to welcome you to Library Mice again. We have been fans for many many years (my now 14 year-old son still has his copies of  the Traction Man books in his room) and  I know we are part of a vast army of fans who much admire your work.  We are all so excited that you have a new book out, The Bad Bunnies’ Magic Show; can you tell us a bit more about it? What was the inspiration for it?

The Bad Bunnies is a really a sort of ‘performance-in-a-book’. The Bad Bunnies, Abra and Cadabra, have padlocked their magician the Great Hypno in one of his own trunks. Then they put on their own rather haphazard magic show, culminating in a dastardly scheme to hypnotise the audience and steal their valuables. Meanwhile, backstage, the Great Hypno is being helped to escape and take revenge upon the bunnies…

The inspiration was: quite a few years ago I illustrated an anthology of poems by June Crebbin for Walker Books called The Crocodile is Coming, and one of them was called NEWSFLASH. It was all about a disaster at a magic show, and it contained the line “A white rabbit is being held for questioning.” Afterwards I kept returning to the rabbit – except it needed to be two rabbits, and I loved the theme of magic and transformations. 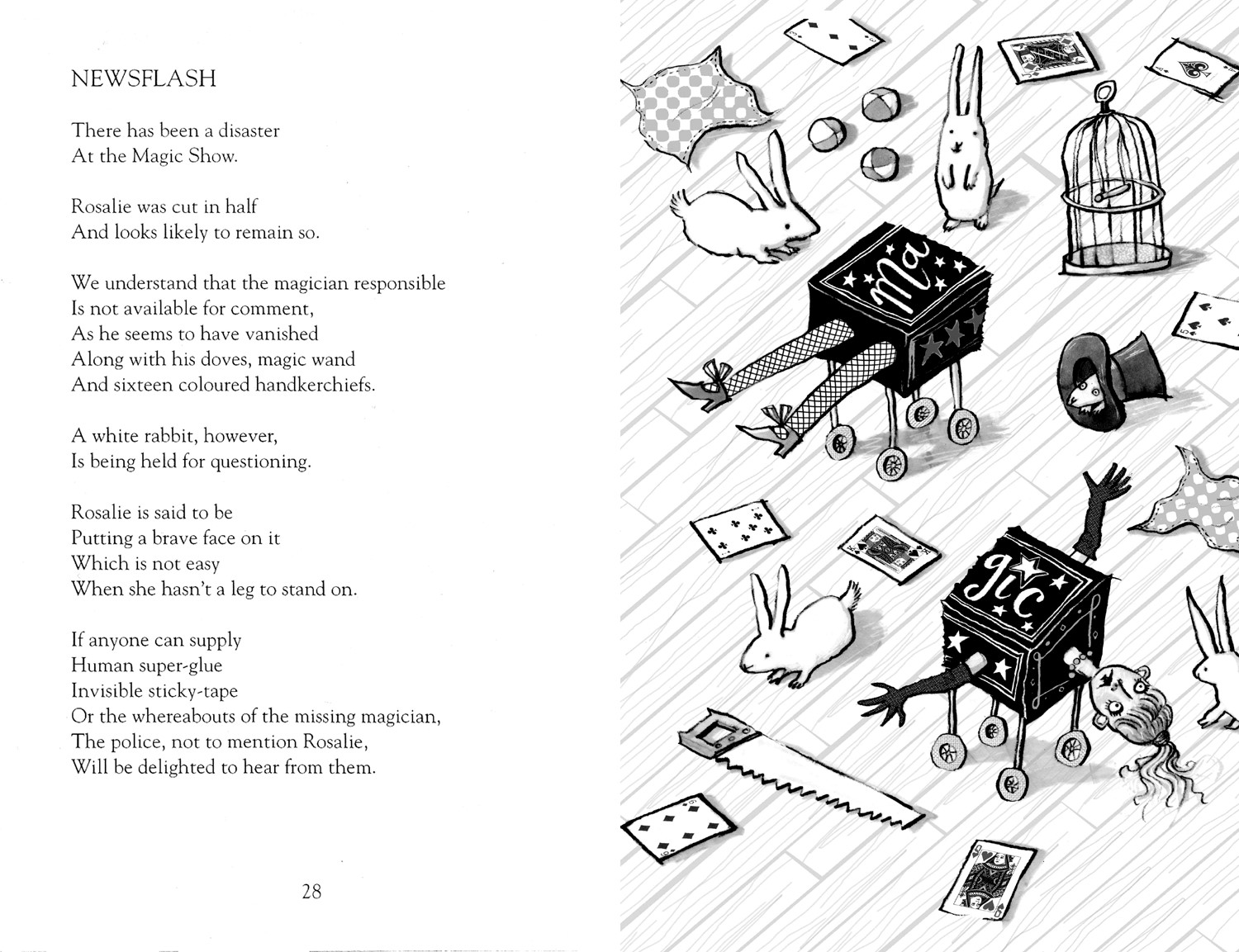 You have written as well as illustrated most of your books. What is your creative process? What comes first, text or artwork?

It can be either, or a mix. Often what I do is think about a theme by drawing lots of images about it, and these turn into a collection that sometimes starts to suggest a story.  But sometimes typing up some words, printing them out & cutting them up can give you something to bounce off for creating images. The way words and pictures behave together is always interesting and surprising.

With the Bad Bunnies I did some little pictures, and I thought I could make an ‘elves and shoemaker’ story except with a magician because I liked the idea of a magic shop. And that didn’t work. Here are some sketches: 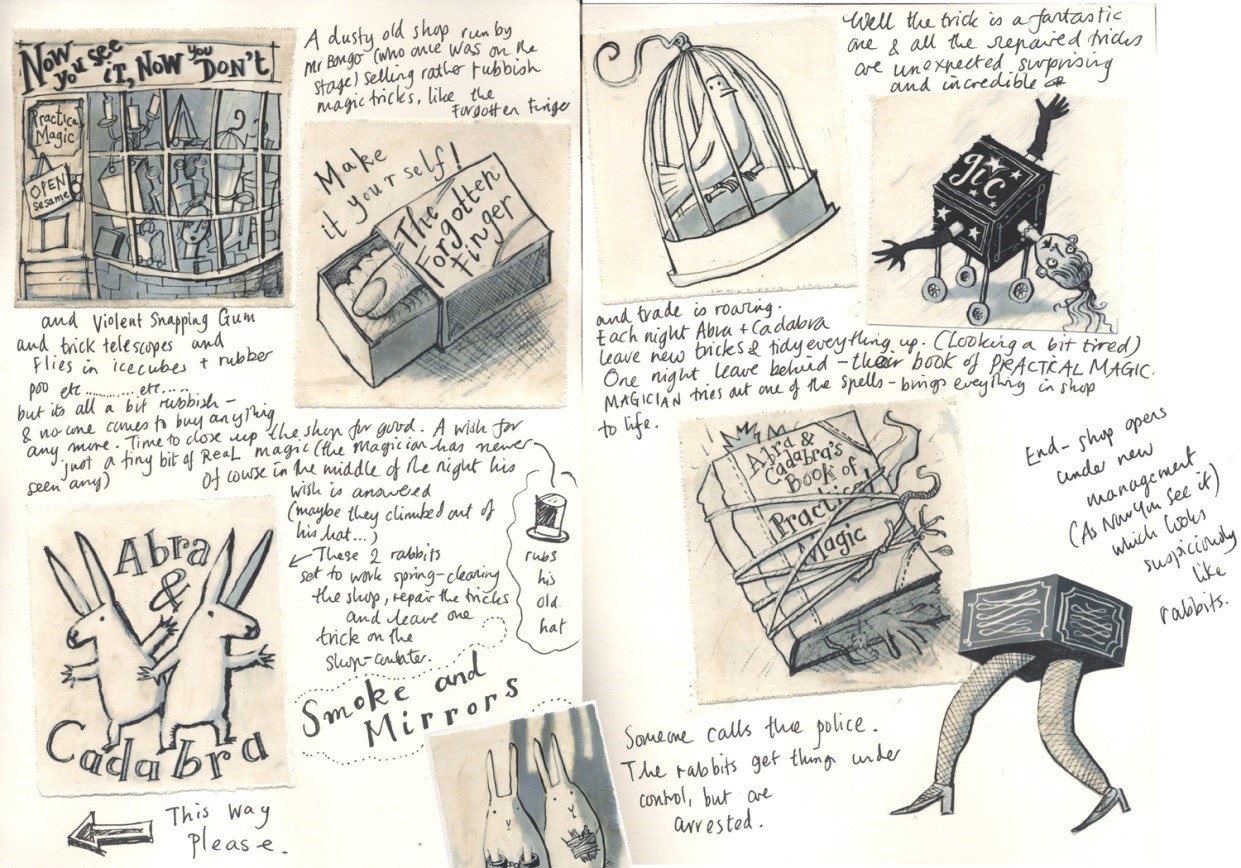 Then in the end I was on a train thinking about it, and thought “What if the book is a performance?” – and just scribbled down the performance being announced – here’s the page: 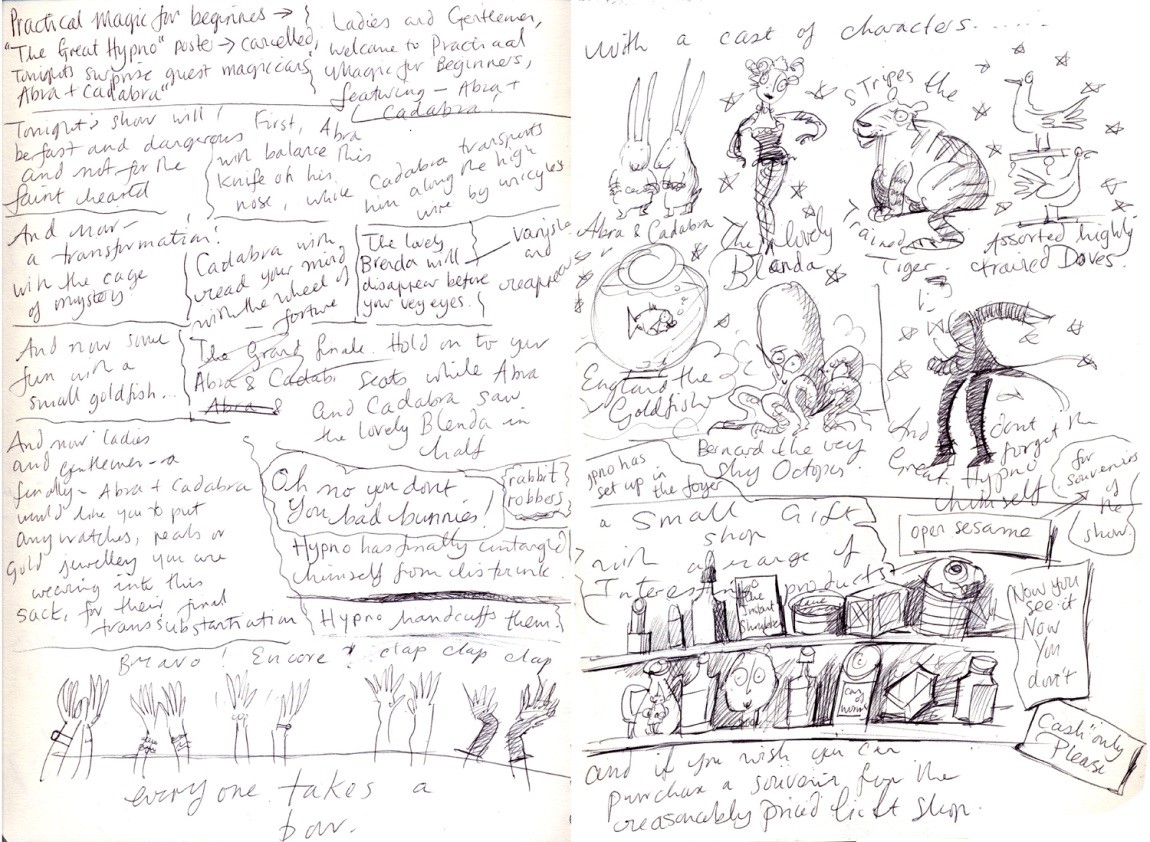 And the final thing is fairly similar.

I attended your workshop at Oxford Reading Spree on pop-ups where you had an impressive collection of  books displayed. Can you tell us a little more about your love for them?

Crikey! You deserve a medal –  I think I got carried away with TOO MANY MECHANISMS! And actually with pop-up less is often more – (which I will return to in my next answer…)

I love pop-up because it’s like a magic trick – the book springs out into an extra dimension and comes to life in your hands. I also love the engineering bit – trying to design a mechanism that does what you want, and the process of experimentation for trying it out. It’s a bit of a hobby really. I ran a pop-up club at my son’s school for a year. I thought initially that I could just keep doing the same mechanisms every term with new groups of children but I ended up having the same group of children for a year so I had to find out about a year’s worth of mechanisms!

I loved your session at Oxford reading Spree! You were so full of enthusiasm about paper engineering! I still have the template of flexagon books you gave us.
How do you plan such features in your books, such as the flaps in The Bad Bunnies’ Magic Show?

When I started trying to make the Bad Bunnies I was imagining that all the tricks would happen with paper engineering, and I made a dummy with quite complicated mechanisms in it. But these weren’t really very successful, because the scope of the magic trick was constrained by the mechanisms I was trying to use; for example, the ‘Birdcage Transformation’ was a mechanism called a ‘woven panel dissolve’ – but that meant the tiger had to be too small, and he really needed to be huge. So eventually I abandoned all the complicated stuff. (Although at one point a brilliant paper engineer called Nick Denchfield played around with the Bunnies and made the most incredible goldfish transformation – I gave it back to him but I wish I’d stolen it – or more honourably made a copy of it.) Abandoning all the complicated stuff, and just making a feeling of magic by shaping the edges of the transformation pages meant I was free to make images exactly how I wanted them. 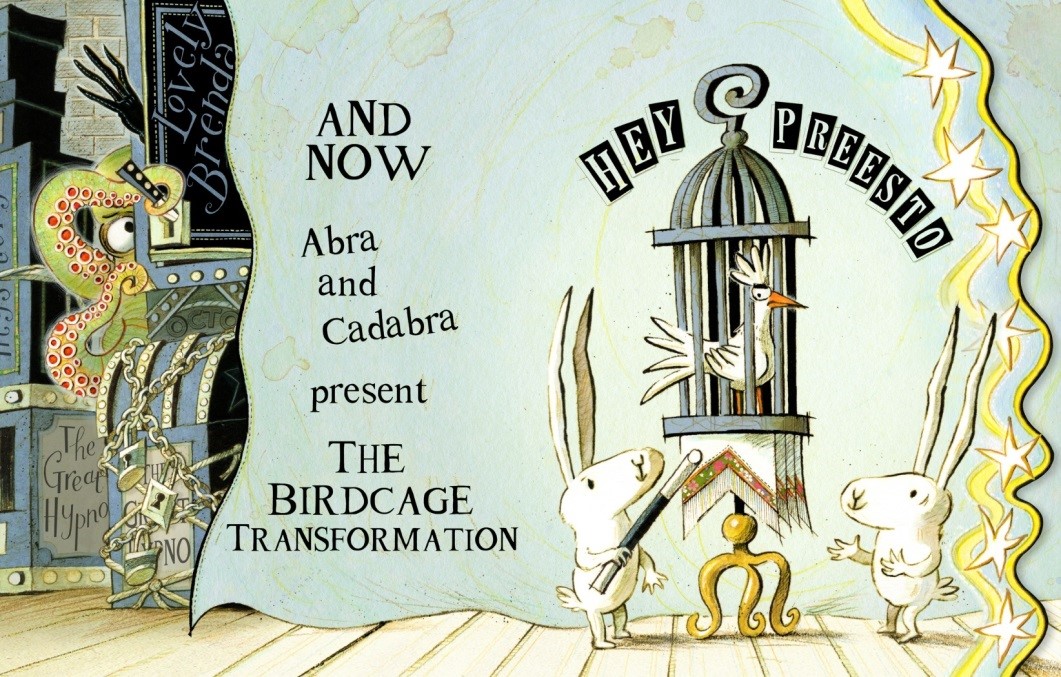 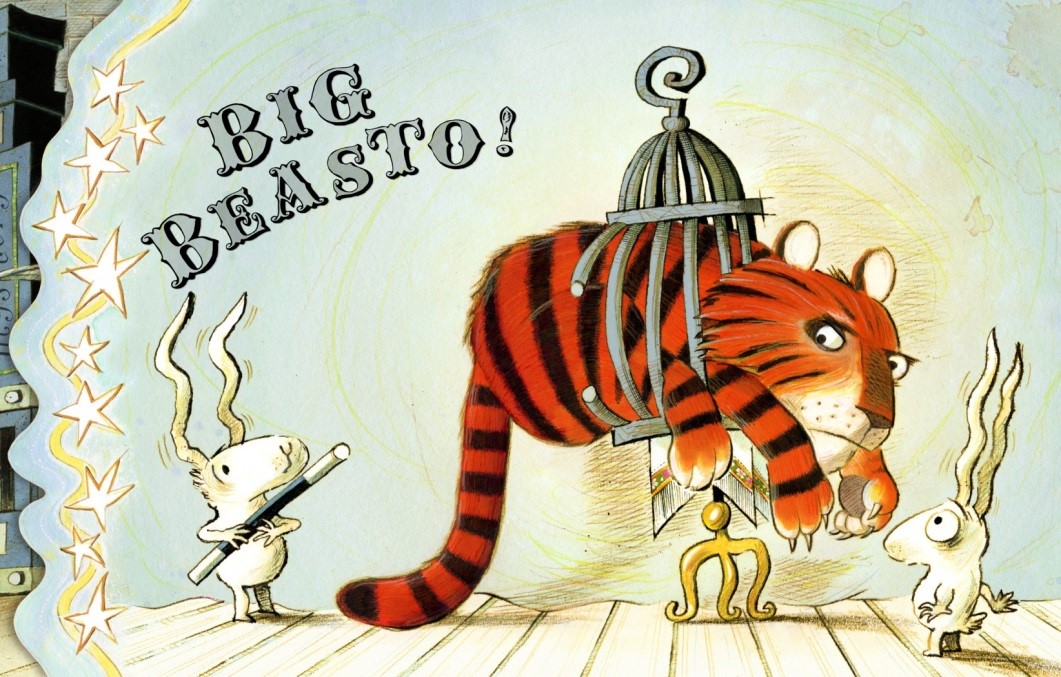 The other thing I had to do was make a model bunny theatre and work out exactly what all the trunks were that were backstage! Here it is: 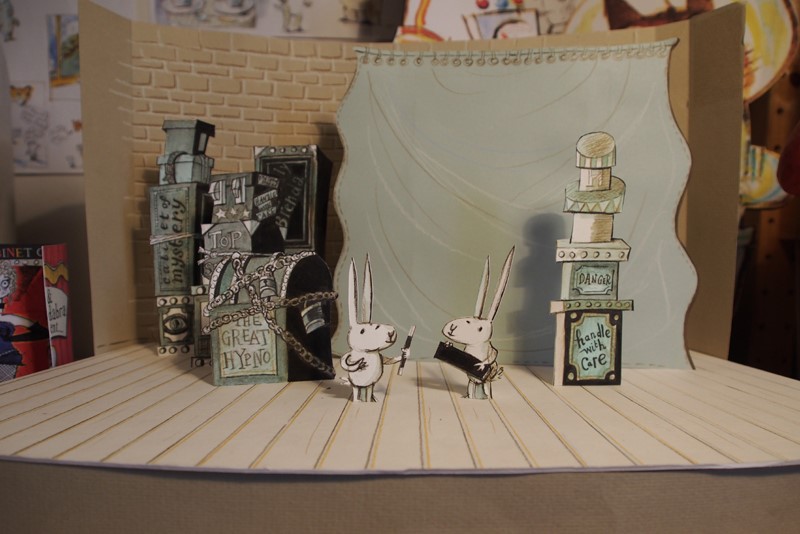 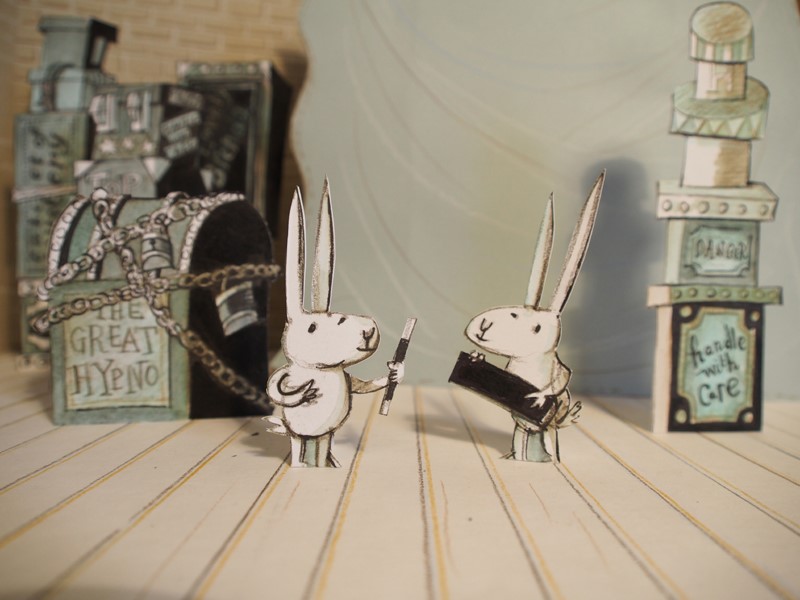 Are there any new or emerging illustrators whose work you are finding particularly exciting right now?

My bookshelves just keep on expanding. There seem to be so many exciting and technically incredible illustrators at the moment, it seems wrong to single anyone out because then I’ll be leaving others out. I was recently at the Greenaway 80th anniversary celebration, and the Greenaway shortlist was a great fusion of established picture book heroes like Emily Gravett and Lane Smith, with newer amazing illustrators like Jim Kay and William Grill, and brand new people like Francesca Sanna and her extraordinary book The Journey. I’m really interested to follow the work of Victoria Turnbull and David Litchfield and also Carson Ellis and Pam Smy….but the list could go on and on. And on.

What is next for you, and what are you working on now?

I’ve recently finished the pictures for a new book, which is set in the woods and involves a wolf – which are both things I’ve never drawn in a picture book before. It was exciting drawing trees and wild animals. Here are a few pictures from it:

Thank you so much Mini, it was a pleasure to welcome you back to Library Mice.

***
The Bad Bunnies’ Magic Show is out now and you can purchase a copy here.