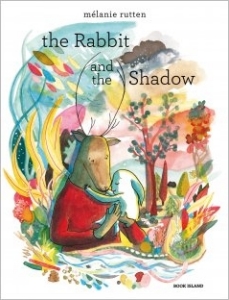 I try to avoid telling people never to judge a book by its cover, because sometimes a cover can be so incredibly beautiful and telling about a book that you can’t just help yourself but be drawn to it. And so you should. This is exactly the case with The Rabbit and the Shadow, and once you open it and lose yourself in its pages, you’ll never look back.
Written and illustrated by  Mélanie Rutten and translated by the hugely talented Sarah Ardizzone, The Rabbit and the Shadow (Book Island)  tells the story of an unlikely pair, a stag and a rabbit, whose father/son relationship is taken to the test when the  rabbit begins to seek some independence and leaves the stag behind. Along the way he makes many encounters, all on a life quest of sorts . Together, they will travel, and they will lean a lot about themselves and others. The Rabbit and the Shadow is  a beautifully lyrical and quite philosophical tale about children growing up, parents trying to let go, and learning one’s place in the world. It is a highly emotional reading experience for a parent, and it deals with tough subjects such as death in a way which is almost serene. Such abstract concepts can be hard to convey in a book,  but this is achieved beautifully, and in a such a delicate way. It is an elegant book, with striking artwork, which answers some big existential questions in a way that is comprehensible for its intended audience. Its slow, poetic pace mixed with the most striking colour palette make this a soothing reading experience; it is a story that most definitely lingers inside the hearts of its readers. 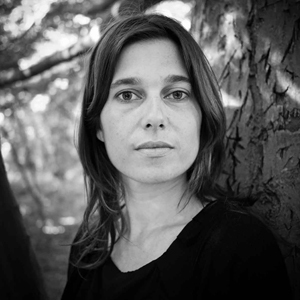 I was really delighted to be given an opportunity to ask Mélanie Rutten a few questions about this very special picture book. Mélanie was born in Belgium, but spent most of her childhood in Africa and Central America. After studying photography in Brussels, she took evening classes with Astrid Lindgren Memorial Award winner Kitty Crowther.The Rabbit and the Shadow is her fifth title and the first one in a series.

Hello Mélanie
Your new picture book, The Rabbit and the Shadow,  has just been translated into English. Could you tell us a little bit more about the inspiration for this stunning picture book? 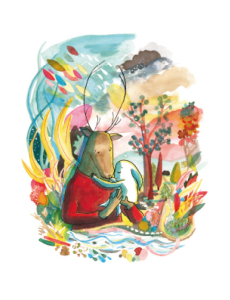 The original inspiration for The Rabbit and the Shadow  is the scene where we see the stag and the little rabbit hugging each other tight,  when we find ourselves in a little bubble of love ” to the moon and back “. This is the cover image : the joy of being  safe in the arms of one’s parent , the joy of hugging one’s child tight …
The other starting point comes from questions about death that all parents  are faced with one day: “Am I going to die? And you, are you going to die one day ?” It is such a  difficult question to answer honestly and sincerely, particularly when the child’s grasp on the reality and certainty of death is constantly evolving. And that conversation will take place several times. I had it with my children and this is the one  the stag and the little rabbit are having also. This is the core of this book. But if the question of death is evoked, it is more the theme of growing up, of coming of age that run through the pages: How to grow up in harmony with others? How to find one’s place, one’s uniqueness in a world that is so much bigger than us ? How to live alone? How to live together?  My books are often born of questions I write in my notebook; questions and issues that are particular to childhood but not exclusively. These are the challenges of one’s existence.

The settings and landscapes in The Rabbit and the Shadow are very exotic in certain spreads. Were you inspired by the landscapes that you were surrounded with growing up in Central America and other parts of the world? 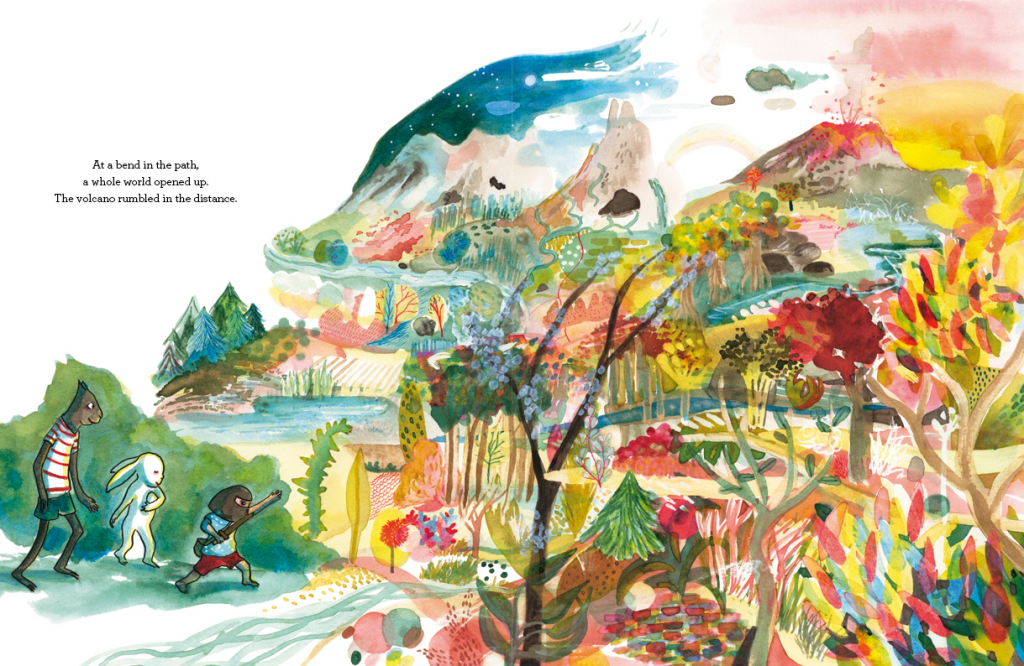 Nature was very important in my childhood; I felt very close to it, as well as the animals around me. It was ubiquitous in my games: water, soil, branches, flowers … I was lucky enough to be able to interact with them. As an adult I am left with much nostalgia about this connection. So I try to reconnect with it by drawing landscapes I have sometimes known, sometimes imagined, sometimes yearned for.
Nature allows me to introduce notions of time , rhythm and natural cycles, all of them I find so important in a narrative. Nature is linked to cycles of the Cosmos, seasons , day and night and these enable me to pace my story. Sometimes comforting , sometimes worrying, Nature is closely linked to the emotional landscape of the characters. It also tends to embody the character of the Shadow which is in total harmony with it. This is also an idea that I ‘d like to take further in the future: to go back to those ancient beliefs that link  Man and  Nature in the most primitive manner.
Nature is also a way to convey  the amazing shades of colors and lights which  give me great happiness on a daily basis.

The colours you have chosen for the book are remarkable, so bright and warm. Can you tell us a little more about how you draw? 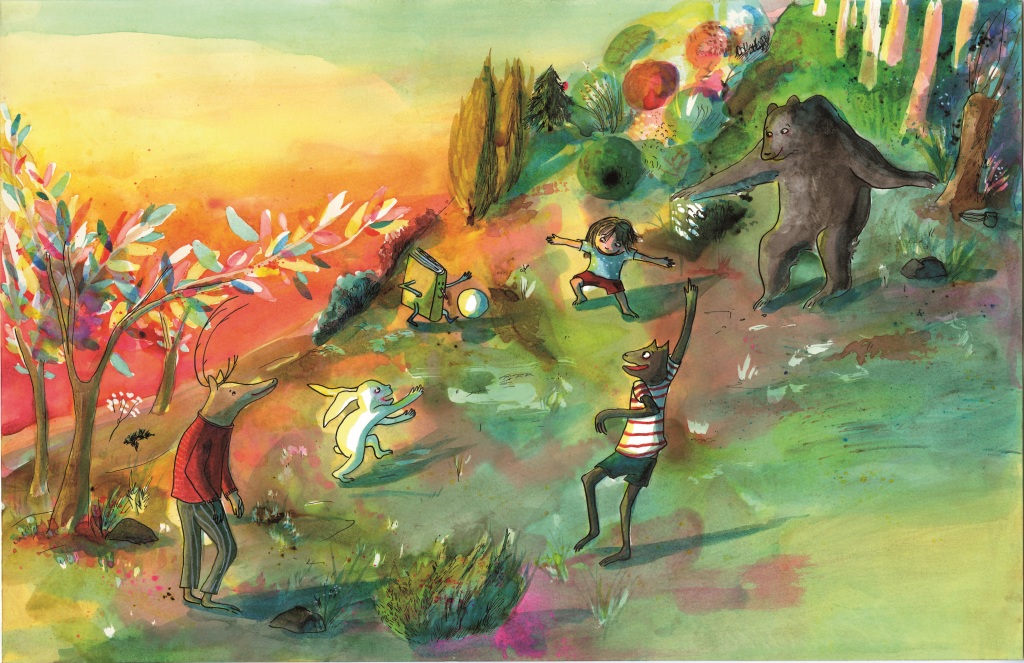 The characters are drawn with an ink pen using black India ink and then colored in , as well as the landscapes, with all sorts of brushes using walnut stain: it is a natural pigment that I mix with other colour pigments. I love using such materials as the results can sometimes be unpredictable.
I then go over certain parts of the drawing again with more brightly colored inks to enhance them.
I chose these bright and tangy tones to translate the spirit and energy found in adventure stories . The fun of experimenting with different ways of conveying ideas in my drawings is important and challenging  for me in my work : finding pleasure in one’s work  and remaining curious is essential in the development of a picture book. When I discuss my work with children, I often compare my process of creation to a game.

The Rabbit and the Shadow is the first book in a series of five. However, chronologically it’s the last one. How does it feel to work on the new titles, having to go back in time? Does it affect the way your characters look? Will they look younger in each new title? 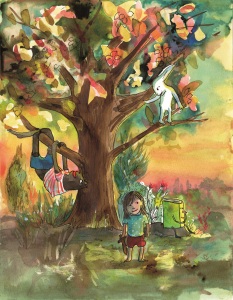 The Rabbit and the Shadow launches a new series of picture books of which it is more the core than the ending.
La source des jours, which has just been released in French is a prequel and goes back to the life of the Bear before The Rabbit and the Shadow. The other characters will then take centre stage in the other books, for example the Soldier, the Cat and maybe even the Book. Each individual story might chronologically take place before, after or sometimes even during the time of The Rabbit and the Shadow.
I love narratives that are embedded within each other, or parallel to each other, because they allow me to express that we are all heroes of our own lives alongside others, and that our lives are all intertwined; we are all part of each other’s lives. This is why I imagine a picture book as a brick which plays its part in creating a whole building, like a piece in a puzzle. I love the idea that all destinies are inter-connected.
The question is: from which viewpoint do I tell the story? Having open endings allows me not to finish a story, which I dread the most, just as I dread finishing books which I am really enjoying reading …
It is possible that the way the characters look might be affected but it is unlikely as the books are all set in a specific and short space of time.

Which authors and illustrators did you particularly like as a child? Was there a big variety of children’s literature in the countries you grew up in?

During my nomadic childhood, books were few and far between but carefully chosen and followed us, in our trunks, from country to country. Some of the characters from those books are still with me today: Jean de Brunhoff’s Babar, Gabrielle Vincent’s Ernest & Célestine, Danièle Bour’s Petit Ours Brun, Arnold Lobel’s Ranelot et Buffolet (Frog and Toad),  Tomi Ungerer’s Jean de la Lune (Moon Man), Roald Dahl’s Le Bon Gros Géant (The BFG),  André François’ Les larmes de Crocodile ,  Maurice Sendak’s Le grand livre vert (The big Green Book, written by Robert Graves)  as well as Hilary Knight’s Héloïse and also Richard Scarry, Quentin Blake, John Burningham …. most of which you will already be well acquainted with of course.

Which contemporary French and Belgian illustrators would you recommend to us readers of picture books?

Amongst my recent and favourite reads, I could suggest, in no particular order: Hélène Riff, Anne Brouillard, Bruno Gibert, Toon Tellegen, Kitty Crowther, Blexbolex, Catharina Valckx… But there are so many more which are escaping me just now. 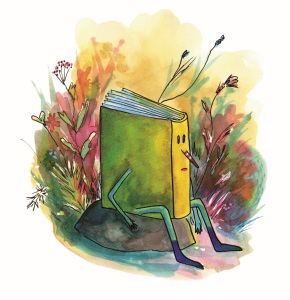 Thank you so much Mélanie for taking the time to answer those questions with such eloquence; I just hope my translation do them justice.
Thank you also to Book Island for their help and the use of images which are of course all © Mélanie Rutten.