GUEST POST: Glenda Millard and the inspiration behind the Kingdom of Silk 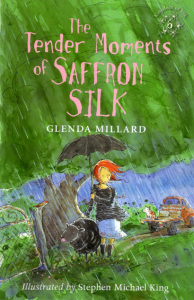 The Tender Moments of Saffron Silk, the latest, and penultimate, book in the Kingdom of Silk series (Phoenix Yard Books) written by Glenda Millard and illustrated by Stephen Michael King,  is out this Thursday. My heart already feels with sadness at the prospect of having to read the final page and enjoy my last moment with the Silk family, but in the meantime, this penultimate tome, which focuses on the youngest Rainbow Girl, Saffron, is another little piece of perfection which will warm your heart.
Saffron has been suffering from violent headaches which render her exhausted but she is too frightened to tell anyone. But her little brother Perry Angel knows how to read people’s feelings and with the help of Nell, Barney the black sheep, and a little bit of Anne of Green Gables, he sets to help the kind and quiet sister who understands him so well.  When Saffron is eventually sent to hospital for tests, each member of the family expresses their love and concern in their own special way.
Every action, every sentiment, every character amongst the pages of this book is a manifesto  for family, for joy, for being kind, for never failing to show someone you love them, and for never ever failing to recognise the tiny tender moments that make one’s life complete.Those tiny tender moments, they are those that “make the soul tipsy with ordinary happiness”. This is why I love this series so much; it reminds us that true happiness is found in the simplest things.

I am delighted to welcome Glenda Millard, to Library Mice as part of the blog tour to celebrate the release of  The Tender Moments of Saffron Silk, to talk about how her own childhood has inspired that landscapes and people of the Kingdom of Silk.

Behind Cameron’s Creek
by Glenda Millard 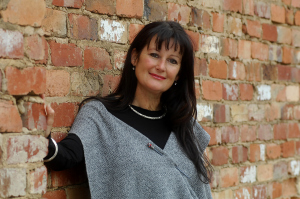 I grew up in a place called Campbell’s Creek, on the outskirts of a small country town. In the early 1850s the area was settled by diggers, miners hoping to get rich on the alluvial gold which was discovered there.

A hundred years later, I was born and then my sister. There were still gold mines and miners even then, but not so many. And the mines were deep underground, no 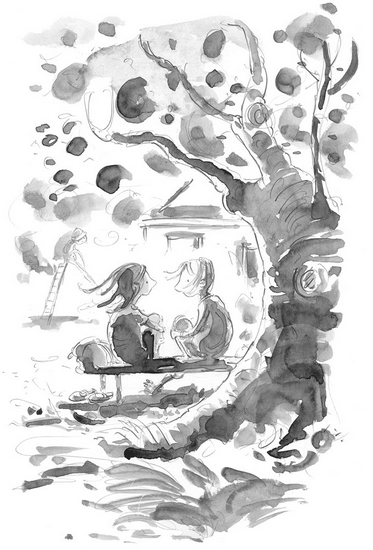 t shallow holes like they had been in the early days. Our family lived in a tiny miner’s cottage with meter thick mud brick walls that my dad painted with lime wash. Dad wasn’t a miner. He worked night shift in a factory in the nearby town of Castlemaine.

Our house was on a hill. On one side was an orchard and on the other side, a cow paddock with a falling down sandstone cow shed. The gravel road that ran in front of our house was called Elizabeth Street. My nana lived at the bus-stop end of Elizabeth Street and grandma and papa lived near the post-office end. Our house was halfway between them, with a huge golden poplar tree in the corner of the paddock. It was a good climbing tree. You could sit in its branches and watch the yellow council grader go up and down the road, smoothing the potholes out of our street.

My sister and I used to go rabbit-trapping or ferreting in the bush with my dad or sometimes with my uncles. Dad and Uncle Raymond used to buy a permit to cut timber in the bush. They didn’t have a chainsaw, so they cut down the trees with axes and saws. We would sometimes go with them and have picnics in the bush. Dad always lit a fire for us and brewed billy tea. When they brought the logs home, a man called Mr Dzioba would bring his swing saw to our house and cut the wood into foot blocks so they’d fit in Mum’s stove. Mr Dzioba was Polish and didn’t have the proper number of fingers on his right hand.

Our mum was a stay at home mum. She had a Singer sewing machine and used to make toys and clothes for my sister and me. Once she made me a ‘Queen of Hearts’ dress to wear for a fancy dress parade at school.

Dad had a big vegetable garden and grew a lot of fruit trees. We kept our own chickens too. Dad rode his Malvern Star bicycle to work like most other people did in those days. As well as the foundry where Dad worked, there was a woollen mill and a bacon factory in Castlemaine. When I was fifteen and started work, Dad and I would pass each other on our bicycles, Dad riding to work and me riding home. It was about four miles there and four miles back.

We had a lot of cousins who lived nearby. Their mother, our Aunty Jean, could knit without looking and never dropped stitches. We had another aunty who could yodel. Yodelling is a type singing. Some people in other lands yodel to their goats or sheep. Other people yodel when they sing country and western music. Aunty Val just yodelled at Christmas time when we all went to Nana’s. Our cousins were allowed to have comics and they had a television. They used to watch it in the daytime with the blinds pulled down. But our girl cousins mostly played at our house. When we played ‘ladies’ I used to put rollers in their hair to give them curls, paint their fingernails with egg-white to make them shiny and colour their eyelids with oil pastels. My mother didn’t wear make-up. 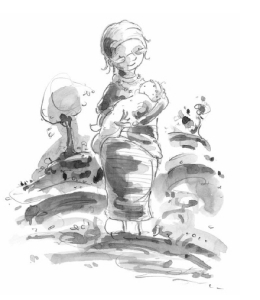 My sister, my cousins and I used to ride our bikes everywhere. Sometimes we went into the bush and threw rocks into the old gold-mine shafts. We’d count to see how long it took for the rock to reach the bottom. We didn’t tell our parents we did this because we knew the shafts were dangerous.

Other times we went to the cemetery and had picnics and afterwards tidied the graves and shared the flowers around. We thought it was sad that the graves of the Chinese people who came to the goldfields never had any flowers – not even plastic ones.

There was a man who lived next door to the cemetery. He lived there all his life until just a few years ago. And he could tell you where to find any grave in the whole cemetery. Sometimes he came and talked to us. His name was Bob and my mum said he was lonely. Bob’s old dad had a horse and dray. Sometimes he gave us a lift on the back of the dray with his sheep-dog. Then Bob bought a big grey truck. He drove it in first gear all the time and people said the horse and dray was faster.

In summer we went yabbying in nearby dams using meat (or soap if there was no meat) tied to pieces of cotton and instead of a net we’d use Mum’s colander (you know, the thing with holes in it that you can use to strain rice through or rinse vegetables in). Then we’d take them home, cook them and eat them with bread and butter and vinegar.

The people next door had a cow and we had the paddock. So their cow lived in our paddock and we got a billy of fresh milk every day. Mum scooped the thick layer of cream off the top and put it in a little saucepan at the back of the slow-combustion stove where it slowly turned into clotted cream. It was delicious with blackberry jam and scones.

As well as the cow, our neighbours had a poultry farm and sometimes my sister and cousins and I would discover a secret hiding place where the chickens had laid their eggs and no-one had found them. We pelted the rotten eggs at the shed wall where they exploded loudly and smelt awful! 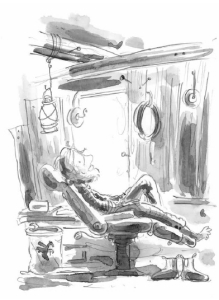 Because our grandma and nana lived so close, we spent a lot of time at their houses. Grandma loved Yardley’s ‘April Violets’ perfume and big straw hats with flowers on the brim. She taught me how to make good scones and polished her brass door knobs till they gleamed like gold. There was a cellar under Grandma’s house and Papa used to keep his home-made parsnip wine and ginger beer there. Sometimes the ginger beer would explode which was exciting for us kids, but made Papa very cross. Papa kept sausage dogs and when they were tiny pups he would carry them around in the pockets of his Bluey jacket. He gave them XXXX peppermints for a treat when they sang for him.

Nana had seven children when her husband, then 42, was killed in the mine. Soon after the accident her twins were born. The twins were raised by other families because Nana was so sad. My Mum said that doctors didn’t know what to do about sadness in those days. There was a hollow tree in Nana’s back yard and a kind of parrot called a rosella nested there every year. We could see the parent birds feeding their young from the kitchen window. Nana had marigolds growing in the garden in front of her veranda and on summer nights we could hear the crickets singing scratchy little love songs to one another.

When I was about sixteen, a family came to live near us in a very old tumbled down house. Some of the people in Campbell’s Creek called them hippies, because they were different to most other people who lived in our town. The father of this family had long hair and whiskers and he fixed up the old house with windows and doors from junk shops. I thought they were a very interesting family.

Some people seem to think that to write a book, the author has to look outside themselves, but in my experience most of what we need to tell a story comes from within. First the writer must know and feel things deeply and truly in order for readers to also feel, know, believe and live.

Nana and Grandma, two wise and wonderful and loving women, became Nell. The whiskery, ‘hippy’ man who I found so interesting, became Ben. Poor lonely Bob who lived near the cemetery and had an invisible map of its graves in his head, became Mr Jenkins.The dress my mother made for me was the one on which I modelled Layla’s Queen of Hearts dress. Mr Dzioba with his one missing finger, became Mr Fairchild the butcher. Nana never spoke of depression, but my mother explained to me why her twin brother and sister were fostered. Told me how Nana said she saw big black birds flapping their wings, coming closer and closer, blocking out the light and stealing her air.

So if you choose to read a book from the Kingdom of Silk series, I hope you have a better understanding of where my ideas came from.

Thank you so much, Glenda. It is fascinating to read how the Kingdom of Silk has come alive.