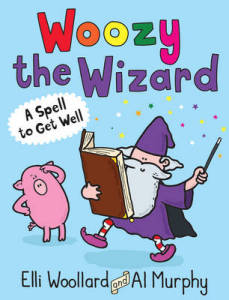 Today I am thrilled to be welcoming Elli Woollard to Library Mice for the latest Fabulous Five feature.
Her début book, Woozy the Wizard: a Spell to Get Well, is the first in a series illustrated by Al Muphy and published by Faber & Faber.
In his first adventure Woozy is trying to help the villagers of Snottington Sneeze who seem to have all gone down with a severe case of sneezing and general poorliness. The villagers hope Woozy will be able to work his magic, but things don’t quite to plan.
Woozy the Wizard: a Spell to Get Well is a lovely longer picturebook in an unusual small format. The format is perfect for newly independent readers, and the simple rhyming text, full of fun and ingenuity, is particularly useful for practicing readers, thanks to the sound repetition and rhythm of the text:

Woozy’s book was all crinkled
and crushed with crumbs
And ink stains and think stains
and smears from his thumbs.

I love the idea of think stains! The story is also perfect for preschoolers who are ready to sit through longer stories.
The bright, comic-style illustrations by Al Murphy accentuates the comedic effect already present in the text. Young readers will love it, and I daresay that Woozy’s sidekick, a pig, will become a firm favourite too.

Elli Woollard grew up in London, and now lives there with her four crazy but wonderful children, her meteorologist husband and two guinea pigs. Slightly more excitingly, she also lived for seven years in Thailand. A graduate in social anthropology, she has worked variously as a teacher of English as a foreign language, a copywriter, an editor and a freelance Thai to English translator. 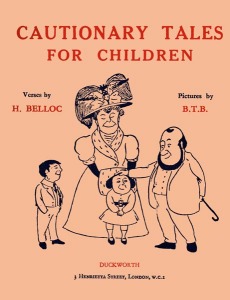 Although this was first published in 1907 (I still have my grandfather’s old edition, given to him on his birthday in 1914), this remains one of my favourite children’s books written in verse.  The children Belloc writes about, all of them little brats, meet such deliciously horrible ends. I think that as children grow up they are often quite confused by the realisation that the moral world is not simply black and white, that people sometimes go unpunished, and that there are often mitigating circumstances. Sometimes it can be hugely satisfying to read about disgusting people who get exactly what they deserve. Of course this wouldn’t work without a strong injection of humour. But what child would really get eaten by a lion in real life? The fates meted out to Belloc’s children always make me want to punch the air. 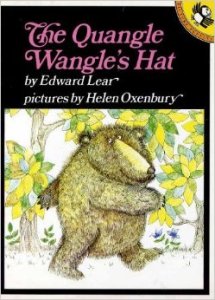 This is a very gentle story, in which not very much happens. The Quangle Wangle, a rather aloof creature who lives at the top of the crumpetty tree and hides behind his large hat, is persuaded by a whole group of animals that his hat would make a perfect home for them. And it does. What really sets this story out is the wonderfully inventive animals, such as the ‘pobble who has no toes’ and the ‘attery squash’ and the ‘bisky bat’, and the way the rhythm and rhyme just trip off the tongue. I can still recite whole swathes of it. 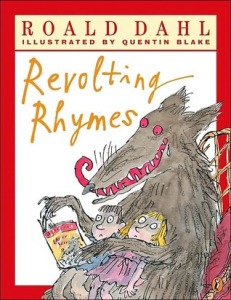 Like Belloc, Roald Dahl delighted in thoroughly nasty characters, from the Twits to the revolting little brats in Charlie and the Chocolate Factory. A lot of his books contain snippets of wonderful verse (as a child I was an Oompa Loompa in a local amateur production of Charlie, and I can still sing the Oompa Loompa songs), but Revolting Rhymes, his twisted take on fairy tales, stands out for the immortal lines ‘The small girl smiles. One eyelid flickers. She whips a pistol from her knickers’. Pure comic genius. 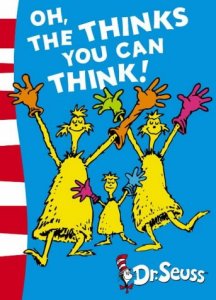 Oh, the Thinks You Can Think
Dr Seuss

I really struggled to come up with a favourite book by Dr Seuss, as they’re all just so good. It was Dr Seuss who taught me about alliteration and assonance and tongue-twisting wordplay before I had any idea what those terms meant.  Take this bit from Fox in Socks ‘When a fox is in a bottle where the tweetle beetles battle with their paddles in a puddle on a noodle-eating poodle’. Absolute joy to read aloud, even if your tongue aches slightly afterwards. And then there’s The Sneetches, which uses comic verse to deliver a message about difference and tolerance. But I think I will plump for Oh, the Thinks You Can Think as my favourite, just because it’s so completely mad and inventive. ‘Think of black water. Think up a white sky. Think up a boat. Think of BLOOGS blowing by’. Whatever a bloog is, I want one. 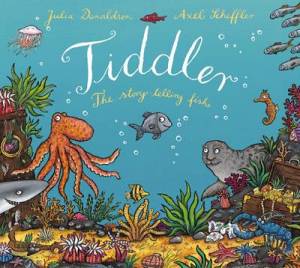 There’s a reason why Julia Donaldson dominates the children’s book market. Most of her books are just so very, very good. A lot of children’s writers who write in verse have problems with scansion, or the verse feels forced or plodding. Not Donaldson. Not only does she write great stories, but she does so in a way that’s wonderful for reading aloud and listening to. Interestingly, her background was in writing songs, and I think it’s her musicality that comes to the fore in her work. Of all her books Tiddler is possibly my favourite, just because of the rhythm she uses. It’s not an easy one to write in, but she’s achieved it perfectly, and reading it is pure pleasure.

Thank you so much, Elli!

Woozy the Wizard: A Spell to Get Well  is out now!