BLOG TOUR: Can I Join Your Club? 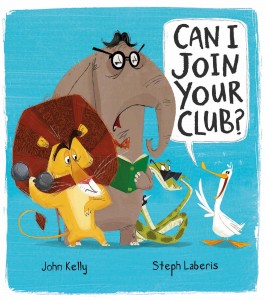 Duck wants to join a club. Unfortunately, it isn’t easy. The Lion club expects members to be able to roar, the Snake club wants members to be able to hiss … every club he approaches denies him membership. Disillusioned, Duck finally realises that the only way for him to join a club is to start his own, where EVERY ONE is welcome to join.
With lots of humour and bold and vibrant illustrations, Can I Join Your Club? touches on themes on friendship, diversity and inclusion  in a manner that is perfectly pitched for little readers, and specifically those joining any kind of social group and trying to fit in, might it be a toddlers group, a preschool or even primary school. Using anthropomorphic characters has always been a great tool to tackle sensitive themes while giving readers the necessary distance to think it through, but in this case, it has the added bonus of creating a narrative that begs for active participation from little readers, with lots of opportunities for making animal noises and generally joining in with the story. 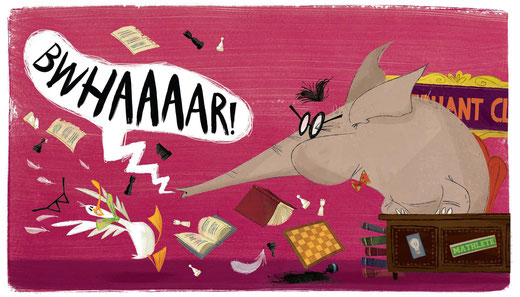 So much so that author John Kelly has created a song to go with his readings, which you can read about below, in this guest post.

The “Can I Join Your Club?” song
by John Kelly

Standing in front of several hundred children and singing a song is not something I ever imagined myself doing. In fact, until a few years ago, I would have run screaming from the room if you suggested it!

But I happened to write a silly song to go with my first Beastly Pirates book. I did it for my own amusement, but my wife (it’s all her fault) made me perform it.

To my HUGE astonishment I enjoyed doing it so much that I have never really looked back.

The thing I really like about making songs for my books is giving children – and a few adults – the chance to sing (or as is more usual) shout very loudly! The children are only too keen to take part, especially when they realise that they are going to get the chance to ‘ROAR!’ like a lion, ‘HISSSS!’ like a snake, or ‘TRUMPET!’ like an elephant at thunderous volume, en masse.

Sometimes it can be quite terrifying the amount of noise they produce. My Beastly Pirate song requires the kids to shout ‘Yo Ho Ho!’ at a suitable point, and windows often seem to shake.

I’m sure the teachers in the adjoining classrooms are thrilled to bits.

The Can I Join Your Club song LYRICS

“We get so MANY applications, we have always found,”
“If you want to be in Lion Club, you have to make THIS SOUND…”

“Okay,” said the duck. “I’m ready to give it a go!”
He opened up his tiny beak and gave a MIGHTY BLOW!

“You’re NOT what we are looking for,”
The King of the Jungle replied,
“So I’m afraid to say your application is… DENIED!”

(Repeat for two more verses substituting Snake, then Elephant, for Lion – where appropriate.)

The poor little Duck, he wandered off alone,
And decided he would make a club, all of his very own…
And he sang…

“For there is only one thing,
that matters IN THE END…
…”DO YOU WANT TO BE MY FRIEND?”

Thank you very much John!

Can I Join Your Club? is out now. You can purchase it here.