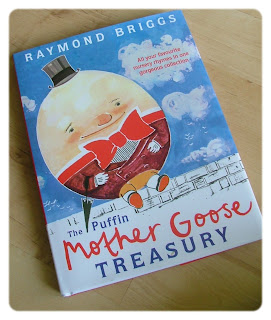 “Treasury is a good word for it. Nursery rhymes are a national treasure.”

This is how Raymond Briggs opens the introduction to the re-edition of his Puffin Mother Goose Treasury, and how right he is too. Nursery rhymes are probably the most “English” things I know. That and cream tea. They ooze cultural heritage, but they also tell us so much about life. As Briggs points out, it is all there: birth, love, marriage and death. Hidden behind the crazy lines, nonsense and wackiness, you will find a universal truth about life.

This anthology was first published in 1966 (and received the much coveted Greenaway Medal in 1967) and has lost none of its appeal. Briggs is himself a national treasure of course. You can see he had real fun doing illustrating the many rhymes (some very famous, some more obscure), and the versatility of his skill is showcased here. Coloured and black and white double-spreads alternate to cover over 250 nursery rhymes, and there is real contrast between the beautifully vintage coloured illustrations and the black and white sketches. 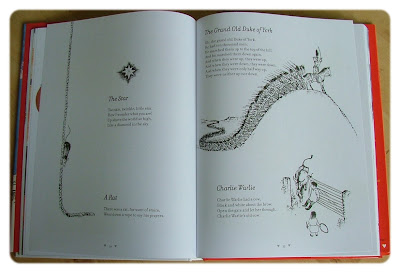 I wonder if The Snowman has overshadowed Briggs’ other work. After all, this is the first thing that comes to mind when you think of the illustrator. But those readers who have read Ethel and Ernest for example will know that it would such a mistake not to get to know his other work, and this wonderful anthology is another example. My favourite illustration from this treasury has to be “The Cat and the Fiddle”: 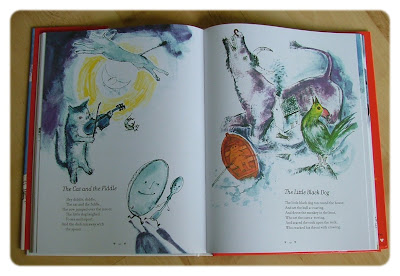 Being one of the most known and loved nursery rhymes, it has been illustrated many times but this particular version brings an aura which I find really brings the rhyme to life. I am not sure whether it is the colours used, and the concentration on the cat’s face or the dish and the spoon eloping hand in hand, but I find it beautiful. I guess some things can’t really be explained. They just “feel” right.


This is a definitely one gem of a book and for a nursery rhyme geek like me, it is an absolute treasure. This is the kind of book that would make a perfect gift for a newborn child, or a christening/naming ceremony. Every child should own a nursery rhyme anthology and this sure is a classic in the genre. So thank you to Puffin for allowing a whole new generation to enjoy it!