This week is National Bookstart Week. Bookstart is extremely close to my heart (I have mentioned this before, notably in a major rant here) and such an vital sche

me in encouraging a love of books and reading  in children that I feel that anyone who is any kind of children’s book enthusiast should all be duty-bound to support.

The theme for National Bookstart Week 2013 is fairy-tales, and no-one could have put it better than Albert Einstein when he said:

Everyone has their favourite fairy tale (Booktrust have just published some interesting research about this, which can be found here) and amongst mine are definitely Beauty and the Beast and Sleeping Beauty. But one of the fairy-tales I remember most from my childhood is actually next to unknown in this country and is one of Charles Perrault’s. It is entitled Peau d’Ane, known here as Donkeyskin. I think what really started my fascination with this particularl tale was the wonderful film by Jacques Demy and how mesmerized I was by Catherine Deneuve’s beauty and lavish dresses (see here) but I think that, at the time, quite how dark Peau d’Ane really was totally passed me by. Because basically, this is the story of a princess who needs to run away because her father wants to marry her. Who said original versions of fairy-tales were for children?
Thankfully, most fairy-tales ar re-written to make them child-friendly, and Usborne are about to publish an updated version of Peau d’Ane , under the new title of The Runaway Princess, and in honour of National Bookstart Week, this is the week I would like to present to you today.

Princess Anna lives happily in a palace with her sister who is married to the King. But her sister dies and despite being heart-broken, the king decides he needs to marry again and sets his eyes on Anna. Anna has no intention to marry him and when she runs out of excuses, she runs away, hiding under a coat made of donkey skin. She is taken in by a couple of farmers who give her shelter in exchange for manual work. But can she hide the fact that she is a princess for ever, and will there be a happy ending for her?

The Runaway Princess is part of Usborne’s successful Young Reading collection and is part of as series one, which are aimed at children who have just started reading on their own. The stories in this series are fairly short, using simple sentences and everyday vocabulary and are divided into chapters. However they make perfectly good stories to read aloud as well as, and as they are heavily illustrated, are suitable for preschoolers as well.

Though the tale of The Runaway Princess will unknown to many readers, it is indeed simply a variation of Cinderella, and therefore will have many elements that young audiences will recognise and enjoy. It is beautifully illustrated by French illustrator Elodie Coudray, whose softly coloured textured artwork has already adorned other fairy-tale retellings in France, and fits the atmosphere of this fairy-tale particularly well. This a really pretty little book which will delight fans of traditional tales and their parents who might be in need of something new! 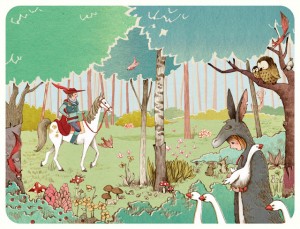