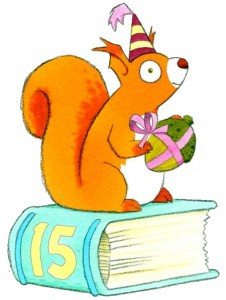 Barrington Stoke is 15 years old this year, and that’s well worth celebrating. For schools across the land, Barrington Stoke books are a godsend. Books that are accessible to reluctant and struggling readers but deal with subjects that they are interested in were rare for a long time. Until they came along,  if you were a struggling reader, you had to read stuff aimed at seven year-olds, even if you were fifteen. Not great for self-esteem. But not more. Barrington Stoke were a precursor in publishing and fifteen years on, the crème de la crème of British teen literature write books for them. For us school librarians, it means that teenagers who struggle with reading can read the same authors as their peers, and those who are reluctant to read can be started off small on bestselling authors with the hope that they might just give the other books by that author a try once they catch the “bug”. But those books are  books that anyone can enjoy, because first and foremost they are good books.

This year Barrington Stoke have got an amazing set of titles due to be published and it well worth looking at their catalogue (see at the bottom of this post).  Today, the focus is on some of their Barrington Stoke Teen titles.

A Lily, A Rose
Sally Nicholls

When Lady Elinor’s father falls out of favour with the new King because of his friendship with Roger Mortimer, he seeks to protect his family by finding a good match for Elinor. But fourteen year old Elinor has other ideas – she is in love with Dan, who is training as a knight and despite her father’s warning that they will never be able to marry, the two of them continue to hope. Until Elinor’s father announces he has found her a husband, a friend of his who  fifty years old. What is Elinor to do?

A story of first love in medieval times, A Lily, A Rose depicts truthfully the choices, or rather lack of choices, faced by young ladies at that time . But first love is just as torturing in the twenty-first century as it was in the sixteenth century and readers will be able to relate to Ellie’s whirlwind of emotions. Because of its historical context, there is no real happy ending to this love triangle, but the ending remains surprising and satisfying, both for readers and Elinor,  who uses her talents and strengths to amend her fate. Ellie is a strong female character but her weakness for Dan also makes her human, and easy to relate to. A Lily, A Rose will delight fans of historical fiction.

Jon is alone, stuck in a hospital bed, surrounded only by hostile medical staff. He is tortured by a recurring nightmare, and every time he wakes from it, he finds himself missing parts of his body: first his arms, then his legs. As the nightmare gets worse, Jon is also wondering why he is there, and why the staff insist on calling him Joe. But the gruesome truth is much worse than any nightmare Jon could possibly suffer from.
Perfectly paced, this story is incredibly  atmospheric, in the most creepy and horrifying way. The rather terrifying theme and setting are accentuated by fantastic yet truly nightmarish artwork by Vladimir Stankovic  The climax is particularly chilling but perfect.  Jon for Short explores insanity and fratricide, two themes that might makes some adults uncomfortable but are dealt with skifully by Malorie Blackman. A tense and terrifying, yet compelling read, Jon for Short is a great specimen of horror short stories.

When Jess becomes pregnant in her teens, she knows people are going to judge her. But when her rather unusual baby is born, nothing can prepare her for people’s reactions and rejection, and the pandemonium that a baby moose brings into her life!
Light and often hilarious yet touching and full of empathy, this clever story offers a perceptive depiction of our society deals with children who are branded as “different” . Baby moose Lucas is a wonderful allegory for these children who some people consider  as not fitting  into our society’s mould. The same can be said for  Jess and Nick,  who as teenage parents are faced with constant criticism and yet do all they can to bring up their son the best they can . Jess’ sharp eye makes her a great social commentator, and the reader can really hear the author’s wit through Jess’ voice. But through her often sarcastic comments the reader can also feel her sensitivity, and how wise she actually is, unlike many of the adults who cross her path, and who allegedly have  the best intentions at heart.
Moose Baby is a funny yet thought-provoking and rather wise tale of relationships, parenthood and acceptance.

Tonight is supposed to be Anna and Cam’s big night, their first night. But despite being the golden couple and Cam the best boyfriend anyone could ever wish for, Anna is far from behaving like the best girlfriend. She looks for support from long-suffering best friend Tilly, who is cross with her and behaving oddly tonight. To keep her mind off her own problems, Anna decides she will set Tilly up with the only other openly gay girl in school, Summer. But Anna’s ill-advised matchmaking unlocks a chain of events with disastrous consequences.
Falling is everything we have come to expect from Cat Clarke’s work: gritty, powerful, honest yet always poignant and conveying such fragility in its characters. This is a powerful and touching story of falling in and out of love, of being true to oneself and of coming out.  Though there is no happy ever after in this tale, this is certainly a welcome book for teenagers who are either struggling with feelings and finding themselves, and despite the bleak outcome, there is something positive about this story, which is that at no point do any of the characters portray any negative attitude towards being gay. Being gay is not really the issue of the book, the issue of the book is realising who it is you really are in love with, even if it is too late. British LGBT books for teens are still few and far between but there is definitely  a steady growth in the market, and this is a much welcome addition.

Nicky’s mum is gone and his dad is in a bad way. Nicky is left to care for his brother Kenny, who needs watching like a little child. When Kenny becomes embroiled in what he thinks is early-morning animal watching but turns out to be badger-baiting by the local thugs, Nicky is also witness to the senseless and cruel actions of the boys. When he goes back later to bury the badger, he rescues one of the dogs, left for dead by its owner, and  finds a forgotten baby badger. Can he save theme both?
Slightly longer than other Barrington Stoke titles, this is a powerful story which deals with difficult themes: bullying, intimidation, broken families, poverty, social deprivation, attitudes towards people with learning difficulties, cruelty towards animals. Nonetheless, this is an incredibly uplifting tale.  Saving the badger and caring for the dog is the focus needed for Nicky’s father to turn his life around, as if this sudden connection with nature is the prodding needed  to remember how much he loves his children and for him to attempt to better his life.   Though it is reminiscent of Barry Hines’ Kestrel for a Knave in some ways, the ending here is full of hope. Brock is both timeless and current, and simple but beautifully written.