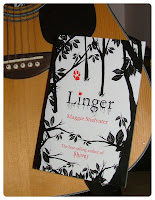 Linger picks up right after the end of Shiver. Sam has been “cured” from turning into a wolf and now lives hidden in Grace’s bedroom, unbeknown to her mostly absentee parents. He is adjusting to the life as “just Sam” and is missing his family, who are still all out in the wilderness, as it is mid-winter. The pack of wolves now includes Olivia, Grace’s best friend, and the three new recruits that Beck, Sam’s adoptive father, brought from Canada just before turning. Trouble soon stirs for Grace and Sam. Firstly Cole, one of the new wolves, does not seem to be able to hold on to his wolf skin and regularly reappears as a human, carrying a whole lot of issues with him. Then Grace starts being sick; she knows something is stirring inside of her but she is too scared to face to it. A sudden decline in her condition one night triggers her parents finding out that Sam lives at their house. She is taken to hospital, and Sam is sent on his way, and asked to stay away. So the struggle to stay together begins … but can Grace keep at bay what is finally waking up inside of her?

Linger feels very different from Shiver and rightly so. The plot has advanced of course and with Grace and Sam now in a relationship, there is not so much of the longing which made Shiver so intense. But their relationship is still very deep, and is still not without stumbling blocks! Sam is still the gorgeous sweet poetic boyfriend, but boy has he got competition this time because enters Cole! Cole the rock star, the bad boy, the damaged boy, the boy who really only needs a whole lotta of love. That’s just the way I love them in books! His relationship with Isabel (what a great character she is too!) is really what kept me on my toes the whole book, and I hope the relationship will reach a new level in the next book! The storyline does not stagnate either. We thought there was a cure to the “wolfness”, even though it did not work on Isabel’s brother, but towards the end of the book, thanks to Cole’s brilliant mind (I’m telling you, the boy is a keeper!) we get a glimpse of how the whole process might actually work, giving some insight of what might be happening in Forever (due out next summer).
And what can I say about Maggie’s writing? She has a magical way with words. Emotion breaks out on each page like a wave onto the sand, sweeping you along. Just as with Shiver, I felt immersed in the bubble that is Sam and Grace‘s world, a silent witness to their happiness and struggles. Her writing is one of the most evocative and lyrical I have come across in YA, and in fact it would be a mistake to pigeonhole it as YA, as it is so much more than this. The poetry and song lyrics written by Sam are particularly poignant I find. I don’t really see Maggie’s writing as what I call “supernatural teen”. Yes, it has werewolves, but I think the supernatural side of the story is mainly here as a vehicle for the extreme emotions described in the book. I guess one could say that about Twilight too. But Shiver and Linger describe a different type of longing, more profound, more intellectual.

I was not disappointed with this follow-up to what was one of my favourite reads of last year. If you have not discovered San and Grace’s world yet, I urge you to do so.

(And as a school librarian I can only say “YAY!” to Sam’s comment to Isabel about Wikipedia:
You could write a book about the things you can’t find online.)