Today, some very lucky children in Ipswich will be taking part in an event with Jon Agee as part of the The Children’s Book Show.

Jon Agee is the author and illustrator of many acclaimed books for children, including ALA Notable Books Little Santa, Terrific, Milo’s Hat Trick, Nothing, The Incredible Painting of Felix Clousseau, and the Boston Globe/Horn Book Honor winner It’s Only Stanley.  He is also the creator of a series of popular wordplay books, notably, the collection of palindromes: Go Hang a Salami! I’m a Lasagna Hog!  Two of his picturebooks have been published in the UK by Scallywag Press this year, The Wall in the Middle of the Book, and Life on Mars. 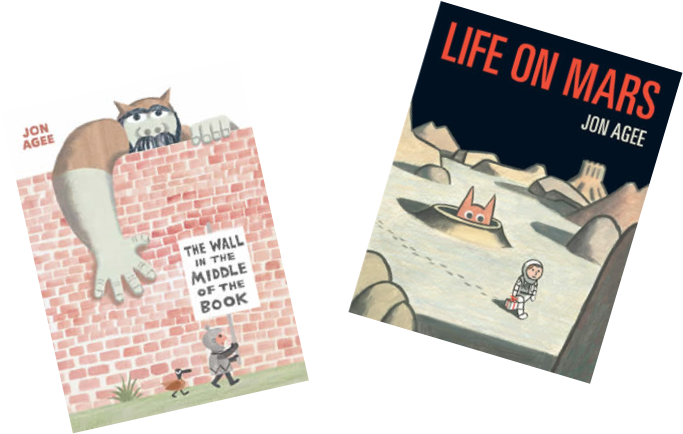 The Wall in the Middle of the Book is endorsed by Amnesty International as a book that ‘celebrates freedom of movement and thought’, and it is to see why. With an ingenious use of the book gutter,the book offers a simple yet clever  take on many very current  themes such as making assumptions, the fear of strangers and the absurdity of creating walls, whether physical or ideological, as borders. It is seamlessly multi-layered, allowing the youngest readers to simply enjoy the silliness of the knight and of the left side of the wall while others will be left to ponder on the more covert themes. 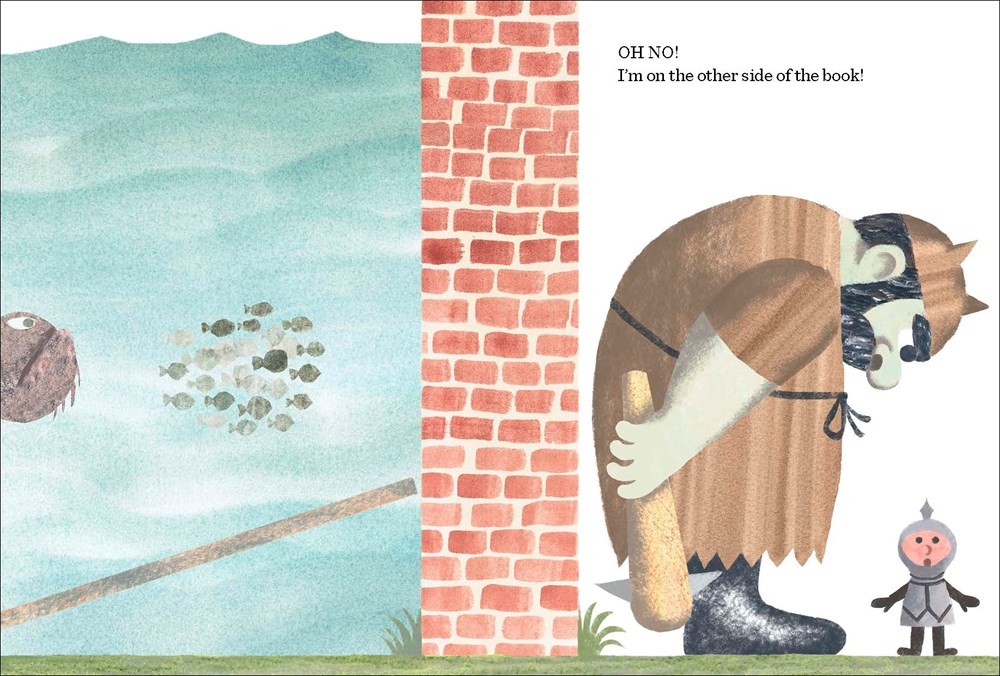 In Life on Mars, a young astronaut  arrives on Mars determined to find life and prove to all that he is right. However things don’t go quite to plan for him. With a clever use of dramatic irony à la Rosie’s Walk , the visual slapstick humour will definitely tickle little readers while the slight sense of entitlement from the astronaut won’t be lost on the more astute reader. 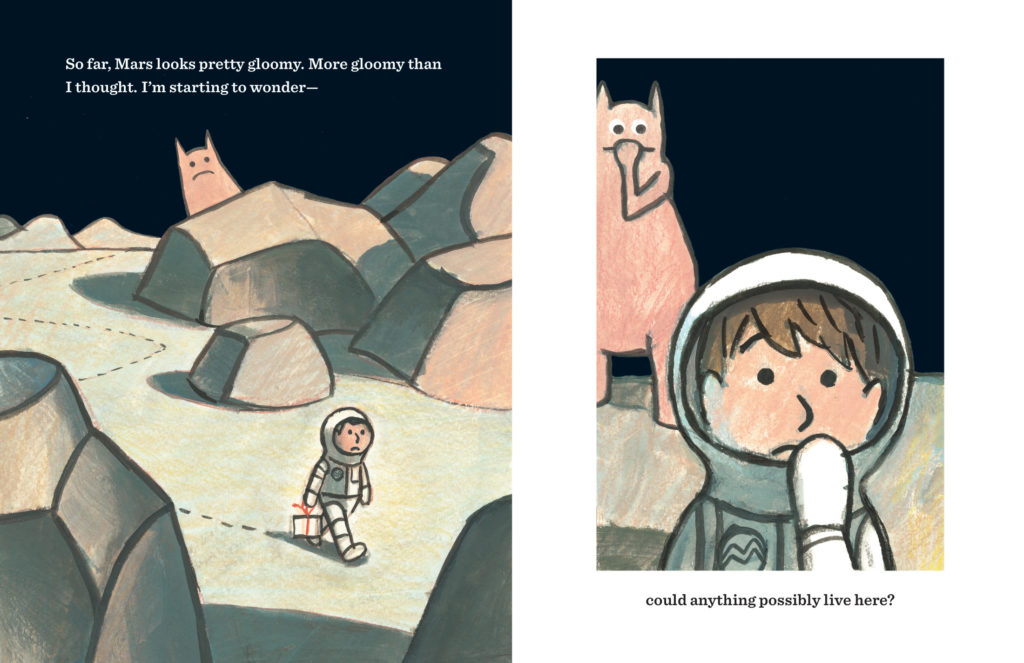 Those are two brilliant picturebooks; funny, clever and a joy to read aloud!

I am so delighted to be welcoming Jon to Library Mice for our latest instalment of Fabulous Five: 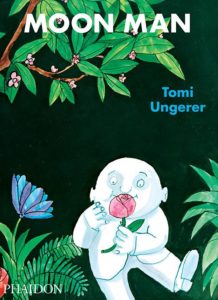 The man in the moon, gazing down at human beings singing and dancing, decides to hitch a ride on a passing comet and visit Earth. He is not greeted kindly, and soon he is on the lam. Things look bleak until he stumbles upon an old castle, where he meets a long-forgotten scientist, who happens to be building a spacecraft to go to the moon. Tomi Ungerer is one of the great picture book creators of the 1970’s, and this is one of his best. 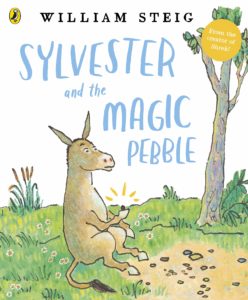 This is a classic. A donkey is in trouble. He has accidentally turned himself into a rock, and there is no way he can turn back into a donkey unless somebody picks up a nearby magic pebble and wishes he was a donkey again. Improbable? Yes. But William Steig pulls off a story that is thrilling, deeply moving, and ultimately, a testament to the power of love. 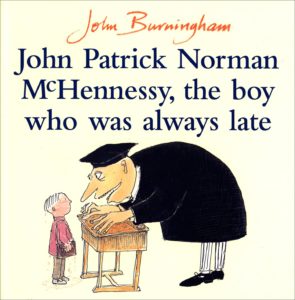 John Patrick Norman McHennessy is in trouble. He’s late to school again. One morning he is delayed by a lion, the next by an alligator. The headmaster is irate. I’m a big fan of John Burningham books, even some of his more obscure efforts, like Aldo and Cloud People. JPNM is a favorite. It has that combination of Burningham’s understated text with the absurd goings-on, a surprising ending, and pictures that are, as usual, audacious and beguiling. 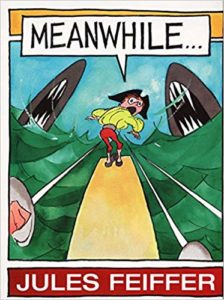 Raymond is in trouble. He has figured out a way to magically switch – or “meanwhile” – from his humdrum reality to a comic book world of pirates, cowboys and spaceships. Problem is, the new scenes he enters turn out to be wildly dangerous, and when Raymond tries to “meanwhile”, he can’t seem to get out of the loop. This was Jules Feiffer’s debut picture book, and I was impressed. He was already a legendary cartoonist, and “Meanwhile”, fittingly, is a beautiful tribute to the comic strip. The book is told is quasi comic book form, with seamless sequential images, a masterful interplay of text and talk balloons, and the pacing, right to the last word, is breathless.

A little fish is in trouble, way more trouble than it imagines. I was a fan of this book from the very start, before it won all of its accolades. It features three distinct underwater characters, a forest of beautifully translucent seaweed, and a bold use of black for the sea. The relationship between the words and pictures is intentionally contradictory, creating tension and lots of laughs. It’s an elegant book to look at, and hilarious to read out loud.

Thank you so much Jon for such a wonderful selection!

The Wall in the Middle of the Book and Life on Mars are both out now and can be purchased here.