Today I am delighted to welcome Petr Horáček, author/illustrator of wonderful picture books such as Puffin Peter and Elephant to Library Mice for a brand new Fabulous Five feature. His two latest books, Honk Honk! Baa Baa! and Time for Bed were published last week by Walker Books (see my review here) 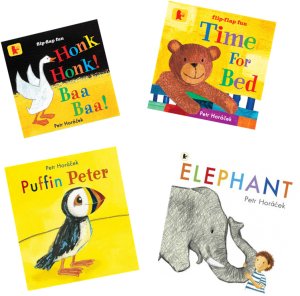 Czech-born author and illustrator Petr Horáček studied at the  Academy of Fine Art in Prague for six years. After moving to the UK and getting married, Petr also acquired a Master in Fine Art degree. He wrote his first picture books when he became a father. The first two were Strawberries are Red and What is Black and White.  Since then he has written many more including Silly Suzy Goose, Elephant, The Fly and Puffin Peter, which was shortlisted for the Greenaway Medal last year. 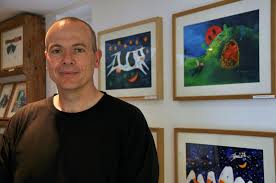 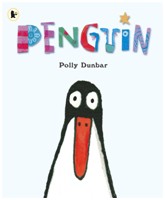 Penguin by Polly Dunbar is a book about a real penguin. To be precise, it’s about real toy penguins, which used to belong to Polly’s brother. I know that, because Polly told me herself.

The story itself is about a boy who tries almost everything to make Penguin talk, but the Penguin doesn’t talk.  The boy tries to make Penguin laugh, he tries to make him cross, he ignores him, he tries to fly him into space, he even tries to feed him to the lion, but Penguin says nothing.
The boy gets so frustrated, that he yells and shouts… so the lion eats the boy! I love this part of the book. The Penguin then rescues the boy and… he tells him everything! And this page is my favourite.

The book is funny, has great structure and is beautifully illustrated. The text is well balanced with the pictures and gives the child a chance to participate in the story. 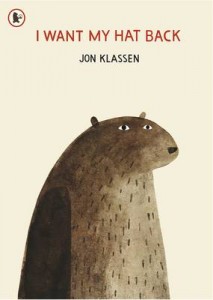 I Want My Hat Back by Jon Klassen is another very funny book. It’s a book that everybody, children or adults, will love. The illustrations are graphically strong, simple and bold. The whole book is beautifully produced.

The story is about a bear that lost his hat. He asks all the animals, including a rabbit with a red hat, if they have seen his… red hat. None of the animals have seen it, not even the rabbit with… a red hat.

I love the dialogue between the bear and the animals. It is so well written and so funny.

The bear then remembers where he saw the hat last time and he goes to fetch it. Later on a squirrel askes the bear if he has seen the rabbit, but the bear hasn’t seen the rabbit. Ehm, why should he? The bear loves his red hat. 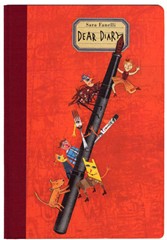 I have always liked Sara Fanelli’s illustrations. For that reason I thought about choosing her beautifully painted book My Map Book. Then I chose Dear Diary because of the story.

The book is cleverly written. In fact it’s not just one diary, it’s a book with several diaries. It starts with Lucy’s letter about what has happened when her teacher asks children to bring an insect to school. Lucy thinks about taking her dog Bubu, but apparently a dog isn’t an insect, so she brings a ladybird instead. Things get a bit out of control. We then read the diary of the ladybird, Bubu’s diary, but also the diary of the Chair, Knife and Fork’s diary and so on.

Does it sound a bit confusing? Well it is, but it is a good, funny story and the illustrations are gorgeous. 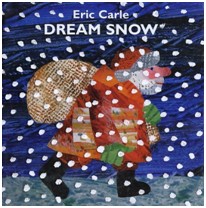 If you are ever looking for a lovely, Christmas story with a cosy, wintery feel, don’t look any further. Dream Snow by Eric Carel is my favourite.

“On a small farm there lived a farmer. He had only a few animals. He could count them on the fingers of one hand. So the farmer named his animals One, Two, Three, Four and Five.” These are the opening lines of the book.

The farmer has a hot cup of tea, bread and honey and falls a sleep. Snowflakes fall, slowly and gently, until a white blanket covers the farmer, One, Two, Tree, Four, Five and the whole farm.

There is no need to talk about Eric Carl’s illustrations. Of course, they are perfect, but when you get to the end of the book and together with the farmer you press the button, something magical happens. Then Christmas can start. 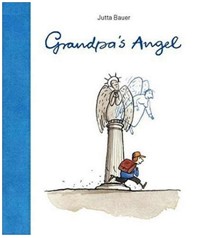 This lovely book is about life and dying.

The book is a beautifully illustrated story about a boy who talks to his dying grandfather. Grandfather always loved telling stories. He was born before the Second World War, he was a young man in the war, he worked hard, and he married, had a child became a grandfather. It wasn’t always easy, but he had a good life, he was lucky. May be because he had an Angel with him all his life.

The book avoids sentimentality or being kitsch, but I doubt that you will finish the book without a tear in your eye.

Thank you so much Petr for this wonderful selection.