May saw the publication of two  brand new series by bestselling author Holly Webb. Though she is best known for her animal stories, these two series focus on  different genres, although interestingly both feature a dog as one of the main characters! 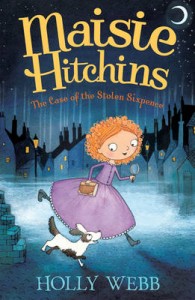 Maisie Hitchins: The Case of the Stolen Sixpence
with artwork by Marion Lindsay
(Stripes Publishing)

Maisie Hitchins lives with her grandmother and helps her run her guest-house by mainly running errands and helping with the cleaning. But what Maisie craves for is a life of adventure and mystery-solving,  and following the footsteps of famous detective Gilbert Carrington. Her first case comes to her right after she secretly rescues an abandoned puppy, which steals sausages from George the Butcher Boy’s bicycle. George is soon sacked but for an unrelated offence: he has been accused of stealing from the till. Convinced that he is innocent and desperate to make amends, Maisie takes on the case.

The Maisie Hitchins series is a great introduction to mystery stories for young readers. Heavily illustrated by Marion Lindsay, the book is quite thick but accessible to newly independent readers. The social history and overall atmosphere of Victorian London is portrayed perfectly through the text and illustrations, and in a way that is accessible to young readers. Despite being targeted at a fairly young audience, the series doesn’t shy away from some of the “truths” of that time: children had to work, people lived on the streets and some of worked still had to steal to survive. There is something about Victorian London that makes it the perfect setting for a good detective story, and The Case of the Stolen Sixpence definitely delivers that too. The mystery itself is again well pitched at the audience: a little peril, a few clues and a denouement which will be satisfying and fair to young readers.

The Case of the Stolen Sixpence is a very enjoyable story and Maisie a lovely character; it is always great to see a young female character willing to defy social conventions and this series will be great for young girls who already like their heroines daring and determined.

Also available in this series:
The Case of the Vanishing Emerald (out now)

Have a look at the Maisie Hitchins website for a sneak peek inside the book, activities and much more! 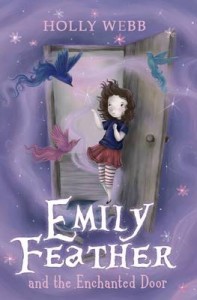 Everything about Emily’s life is unusual and different comparing to the rest of her friends. Her parents are artistic and bohemian, her older sisters are twins and always look trendy in a quirky kind of way, and her younger brother is boisterous and forever famished. But what is most unusual about Emily’s life is her house, where the doors change colour, the windows shimmer, the walls move and the mirrors show things other than your reflection. But do they, or is it just Emily’s overactive imagination? When Emily opens a mysterious door however, everything that she has ever believed in is shattered and she finds herself discovering a world full of magic and wonder, but also darkness and danger.

Emily Feather is a series aimed at slightly more experienced readers, as there are no illustrations to break the text, who enjoy fantasy and magic. Though faeries and magic play an important part in the story, the genre is  also used a platform to develop the theme of belonging, or rather feeling that you do not belong.  This, as well as Emily having to adjust to the changes in her family, is dealt with tactfully and what is interesting is that although the theme of feeling different from one’s family is not new, the take on it is rather unusual: here Emily is the “normal” one amidst a family of magical people. So many children feel that they are not “special” for many different reasons and this is one story that they will really take comfort from. Emily is cherished by her family not despite of of who she is, but because of who she is and this is a welcome message for children who might lack that confidence.
The introduction of darkness within magical realms is subtle but effective as well. As children grow, fantasy and magic books become darker and Emily Feather provides a bit of toe dipping into that darker side of fantasy.

Also available in this series:
Emily Feather and the Secret Mirror (out August 1st)

Come back tomorrow for a guest post by Holly Webb!