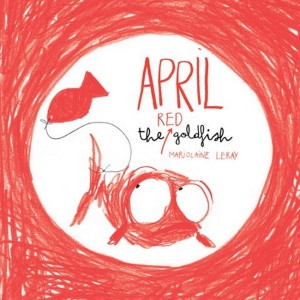 April the fish is an unusual kind of red goldfish*. She lives on her own in her fish bowl and spends a lot of time contemplating the meaning of life.  Her parents don’t care much for her woes and  April is a bit depressed, to be honest. She wants m0re from life than just going round in circles in a fishbowl. She knows there is more, out there! But how to escape? The appearance of a malevolent cat might just be the answer to her prayers.

April the Red Goldfish could not published on a better date than April 1st, as of course, April’s Fool in France is indeed April’s Fish, or le poisson d’avril. 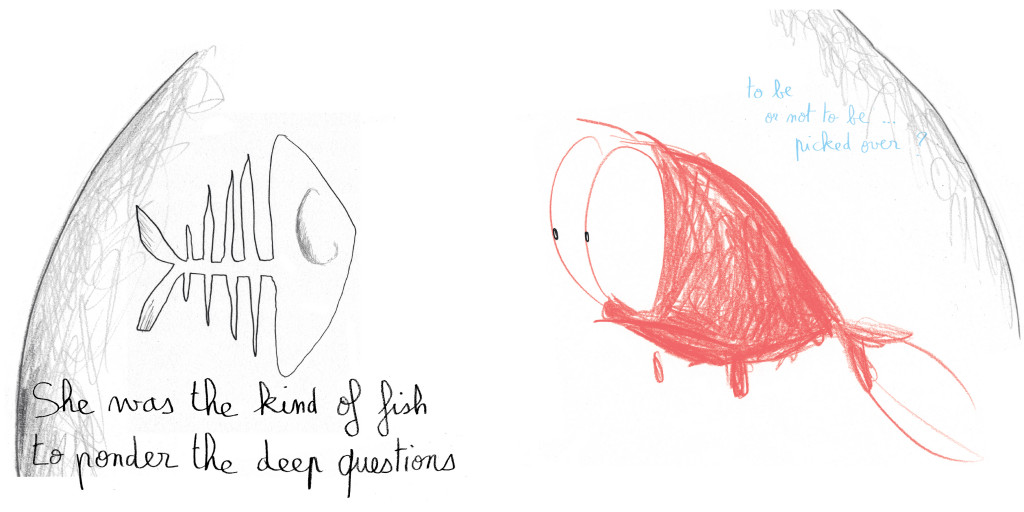 The story of this soul-searching goldfish is witty and droll, particularly because goldfish are often seen as the most insignificant and pointless pets. This yearning to break the mould of expectations is a recurrent theme in Leray’s work, as is her minimalist palette  predominantly of red and black  and her scribbly artwork. Though simplistic, the illustrations  speak volumes and only need very sparse accompanying text. Leray’s unorthodox style and stories might not be to everyone’s taste, and admittedly April the Red Goldfish is not really a picturebook for young children (though they will definitely enjoy the wackiness of the tale). But as a picturebook for older readers, it will undoubtedly speak to those teens who feel that they are not completely comfortable with their place in the world and are yearning for something more. April will show them that however insignificant you or others might think you are, the opportunity will eventually present itself, ready for you to grab with both hands. It has a very strong message of not giving up, but also that it is ok to feel different, and to yearn for “something else”.
Yes, sometimes it is verging on the absurd and is a bit “out there”, but it is also sophisticated and full of hope, and so I doubt  April the Red Goldfish will leave you impassive.

Look out for this gallery on the Guardian website, which includes fascinating insight from Sarah Ardizzone on her translation work for the book.

*(How confusing – how can a GOLDfish be RED! The English language is so weird sometimes! )