It is a few days before Christmas and Sara is spending a few days with her Grandad while her parents prepare for the arrival of her baby brother. But when it starts snowing hard, Sara’s Grandad is unable to take her back home and they are stuck at his cottage. In an attempt to cheer her up, together they build a polar bear out of snow as well as an igloo in the garden, a skill that he acquired when he spent some time in the Arctic as a boy. They decide to sleep in it, but when Sara awakes she finds herself alone, transported in the Arctic, rather than in Grandad’s back garden. Soon she comes across a lost polar bear cub and together they go on a quest across the wilderness to find the cub’s mother. Will they be back in time for Christmas, and to welcome Sara’s brother into the world?

The Snow Bear is a gentle wintery tale which is perfect for the build-up to Christmas. There is such a lovely cozy atmosphere to the tale; you know, the kind which makes you want snuggle under a blanket with a hot cup of tea. I am not sure what I was expecting, but this beautifully-packaged little book was a lovely surprise.  The story touches on themes of separation and the prospect of a new arrival in the family with great care and understanding. Sara’s worries about her mother and being separated from her parents are mirrored in Peter the cub’s search for his own. Thanks to Grandad’s memories and Sara’s own dream, readers are also introduced to life in the Arctic, its fauna and the customs of its inhabitants, the Inuits, and even the Northern Lights. Young readers will undoubtedly find this fascinating and informative, as my own children did, and this will go a long way at keeping interested those who might want more than just “feelings” in their stories.

We read this aloud for bedtime reading and it worked very well, as the story is divided into ten chapters which are not too lengthy. Thanks to the illustrations which break the text into manageable chunks, The Snow Bear will also make a lovely read for newly confident readers. 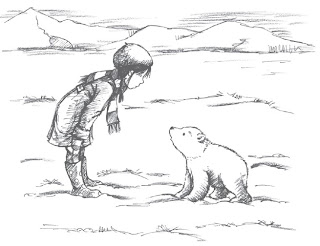 Here is Holly Webb talking about The Snow Bear: