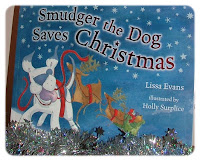 It’s Christmas Eve and Smudger the Dog finds himself thrown out of the house after taking an unwelcome interest in the preparations. While investigating the garden in his own special way, he makes a rather unusual encounter when unexpected guests drop in the garden. Forced to step in for a injured reindeer on Santa’s sleigh, Smudger soon finds himself on a rather unusual type of walkies! But will his awkwardness and clumsiness turn Christmas into an absolute disaster, or will Smudger, although not intentionally, actually save the day? 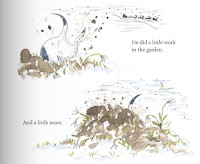 This is a real fun story with a lovable and utterly clueless main character. Smudger’s inability to see the chaos he creates makes him quite endearing, and the artwork mirrors this: Smudger has a real goofy look.

The story is told  in two very different perspectives, simultaneously. The text tells the story through Smudger’s perspective and brings a rather limited viewpoint of what is happening. The illustrations fill in the gaps by giving us the full picture and what is really happening.  For example, Smudger is seen digging holes in the garden but according to the text he is doing ” a a little bit of work in the garden”.It is great fun, full of Christmas spirit, and if nothing else, your little ones will think that Smudger peeing on the Christmas tree is utterly hilarious .. trust me, I have tested it here!

This is rather quite clever and brings great comical value to the book and this won’t be wasted on a young audience who will enjoy Smudger’s lack of self-awareness and his perpetual mishaps.