Spooky Reads (3): The Dead of Winter 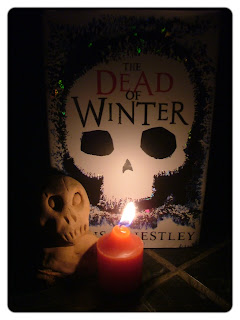 Michael Vyner is burying his mother and trying to face the fact that he is now an orphan when he is approached by a lawyer, Jerwood, who is representing a certain Sir Stephen Clarendon, who claims to be his guardian. Michael knows the name of course, as Sir Stephen is the man his father died saving. Soon Michael finds himself on the way to spend Christmas in the remote and desolate Hawton Mere mansion house in East Anglia with a distant and most preoccupied guardian. As he approaches the house in the dark he is startled and horrified by the apparition of a woman standing alone on the side of the road, crying for help. Nobody else seems to have seen her so he thinks nothing more of it until he starts to sense, during his lonely wanderings in the large and mainly empty house, that something is just not right with the house: strange noises, scuttering shadows, and the ghostly figure of the woman from the roadside … it is soon obvious to Michael that the house holds many secrets, both dead and alive, and Michael, despite himself finds himself trying to unravel what really happened at Hawton Mere, and to Sir Stephen.

An isolated, unwelcoming mansion house, a Landlord with many psychological issues, something nasty lurking in the shadows, a ghostly figure haunting the premises … The Dead of Winter has all the ingredients for a perfect ghostly spooky story. Set in Victorian East Anglia, this very much fits into the theme of traditional haunted house stories. The style of horror here is all in the anticipation, a kind of horror which does not appear that often in young adults’ literature these days where gore is more the name of the game. But Priestley delivers a very credible story which will keep readers enthralled, and manages to write quite authentically in gothic style and make it accessible to a young audience. I was really impressed by his style; his descriptions are particularly efficient I thought. He knows how to conjure the right atmosphere, and in this genre, it is crucial.


I was a big fan of de Maupassant’s horror short stories when I was a teenager (I studied Le Horla aged 16 and when on to read all of his works), and The Dead of Winter reminded me of it, as it was a similar reading experience: the tension throughout, being afraid but not quite sure of what, the ending which is just as chilling and open-ended … Maupassant has often been compared to Edgar Allan Poe, and Priestley did say he had been inspired by Poe in this ghostly offering. This book is a perfect stepping-stone into classical gothic and horror genre and I hope that young readers who read and enjoy this book will feel compelled to go and read the classical stories that inspired Priestley.


I find this kind of horror much more effective than gory horror. The anticipation is what keeps you alert, and I often find myself recoiling from such stories as I am reading them! But in the end, the desire to know more is always stronger! I thought I wouldn’t feel the same with The Dead of Winter as it is a children’s book but I have to admit it is just as chilling in parts!


This a cracking Halloween story and I am now definitely going to seek out Chris Priestley’s series of spooky short stories. A great discovery for me, and if you don’t know Chris Priestley yet, I urge you to discover him too.