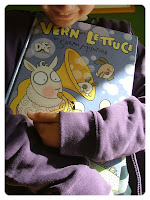 If you read this blog, you’ll know we are fans of Sarah’s work (see here and here). She is a fantastic illustrator of picture books, with a really dynamic, colourful and unusual style. But it is after we discovered Sarah with Morris the Mankiest Monster that we realised that actually, we had come across her work before, in the DFC comic, where Vern & Lettuce first appeared. This long-awaited hardback, from the DFC Library, gathers some of the episodes published in the DFC from 2008 to its untimely demise.

So we (son and I) were chuffed when it finally landed on our doorstep. And it seemed that we were carrying around a bit, and reading and rereading bits. My husband commented on this one night he came home and found me reading it on the sofa:
“What is it with this comic? Wherever I go in the house at the moment, it’s THERE”.

(I did actually have to steal it from my son’s room, secretly, to finally get my hands on it)

But what’s it all about I hear you say? The series follow the antics of Vern the sheep, park keeper and mole-controller, and best friend Lettuce the rabbit, who seems to constantly “bunny-sit” her younger siblings. They live in Pickle Rye in the same tower block with an array of other families of animals. The first part of the book introduces us to the characters and the dynamics between them through a series of short stories. The second part, focuses on Vern and Lettuce’s quest to make it into a television talent show.


So what’s special about Vern and Lettuce? First, it is really funny. Sarah’s quirky sense of humour shines through her illustrations but here, as she is the author too, you get to really see that she has an absolutely wicked sense of humour. Don’t be fooled into thinking it is mainly aimed at children though. I caught myself laughing out loud sometimes; ok, maybe I am a big kid at heart, but actually some of the funny lines also make a more serious point, such as the Polar Bears moving in to Pickle Rye because of global warming.

The bear joke is my absolute favourite, and my son loved the Stilt café: 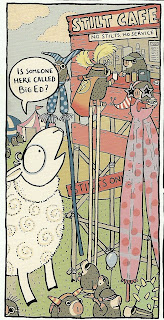 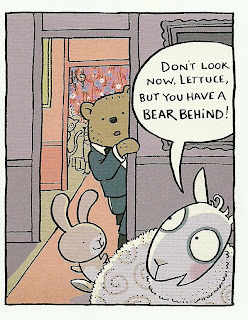 My son loves this book; however, trying to get him to talk about his reading is literally like getting blood out of stone. And so this is all I could get out of him:


It was very funny. My favourite bit was the Mole festival because I love the Silts café the best. I like both Vern and Lettuce (my dad thought it was just one person called Vernon Lettuce!) but my favourite character in the book is Gerard because he is a pigeon and I like his name.


Vern & Lettuce is a great introduction to comics for young readers. The style is clear and easy to follow for those not used to comic format, and the humorous stories will entertain the young readers and have them hooked. But this is also a really enjoyable read for devoted fans of the genre!


As I mentioned previously in other posts, I think that often comics get a hard time in this country and people often do not consider them to be “proper” books. It couldn’t be more different where I come from, and I have always encouraged the students at my school and now my own children to read comics and manga. We need more comics in mainstream bookshops, and we need good quality comics to show that comics aren’t only for nerds or teenagers who dress in black and spend their afternoons in Forbidden Planet (no offence to those who match this description!). Hopefully the DFC Library series will help change the stereotypes (it certainly has all the qualities required)  and Vern & Lettuce will undoubtedly convert a whole new generation to the joys of comic reading. 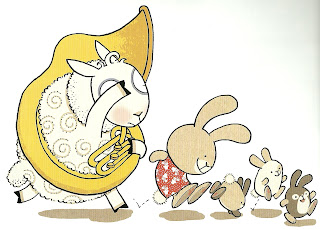 ﻿Sent for review by publisher