What Will You Be, Grandma? 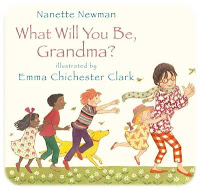 “What do you want to do when you grow up?” is a question we often ask children, but Lily wants to know what her grandma will be when she grows up. Her grandma replies that she has done all her growing up already but Lily disagrees. And so begins the search for what Lily’s grandma could when she does grow up: would she like to be the lady who goes into school and tell children to go and play because lessons are cancelled, or would she rather become an artist who paints rainbows on children’s face? Or maybe she would like to be the fairy with a magic wand who stops rooms getting messy? No, what Grandma would really like to be a lady with a little granddaughter called Lily, who she loves up to sky and down again. And Lily thinks he grandma would be really good at that.

What a lovely, lyrical story about the close relationship between grandparent and grandchild. It is a very touching story  but has quite a bit of humour mixed in which prevents the story from falling into the soppy. Lily has got a very active imagination and you can see that through those potential jobs for her grandma, she is talking about her own wildest dreams. She can be spotted in each illustration, easily recognisable with her lovely yellow dress with red roses. Unusually for a picture book, the narrative is nearly solely based on dialogue between grandmother and granddaughter; two fonts are used for young audiences to distinguish the two characters. The dialogue is constructed in a similar way throughout the book (Lily offers a suggestion, her grandma makes an observation, Lily accedes) which allows it to flow really well, as a read aloud particularly.
I was surprised by the palette of colours used in this book by Emma Chichester Clark; usually the colours in her books are very bright and vibrant but here they look softer somehow. I wonder whether this is deliberate to mirror the obvious fondness between Lily and her grandma. It works well anyhow, and text and illustration work well together.

This is a lovely book on the special bond between grandchild and grandparent and will allow for some very special bedtime reading when grandparents are babysitting! It will also make a lovely present to a special grandma.

Many thanks  to Templar for providing a review copy of “What Will You Be, Grandma?”.