As I mentioned before on here, children’s magazines are big in France, and they were  as much part of my childhood reading as books and comics were. In fact magazines in general are big. I don’t think I have ever seen my dad read a book, but there were (and still are) always  magazines around. I think most British people walking in a good newsagents in France would be amazed as to how many magazines are available there. As with comics, magazines are considered as normal, accepted reading throughout the Continent.That is a major cultural difference comparing to the United Kingdom and one that has secured the success of magazines in France, but has also allowed the quality of magazines to remain high, I think. Don’t be fooled though, not all French children’s magazines are good quality. But there is a huge range available (over forty different titles), whether their focus is stories, information, craft or a particular character (Disney magazines are very big, not only with princesses but also with comic-heavy cult Journal de Mickey and Picsou).

Here is just a selection of children’s magazines from France that focus on stories: 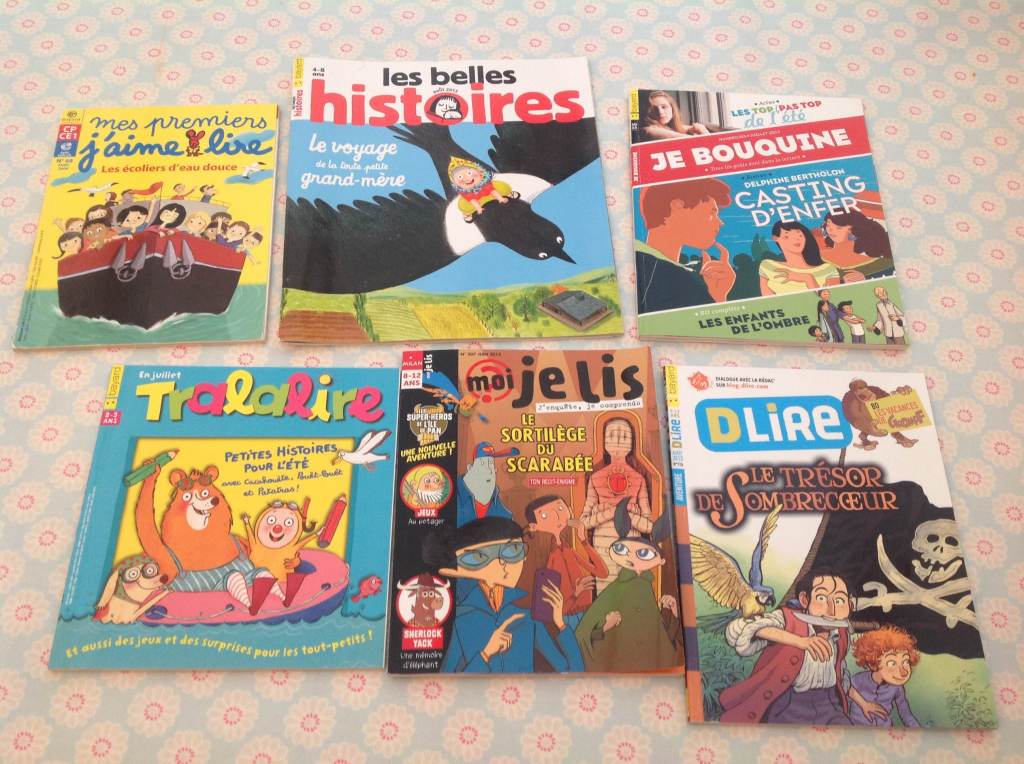 The pale blue colour is for the week-end/per day, yellow for Wednesdays (when most French children do not have school or have half day off), and dark blue for the rest of the week/per day. At the bottom, the average spent per week reading magazines. For 1 to 6 year-olds, it is 3 hours 20 minutes. For 7 to 12 year-olds, it is 4 hours 10 minutes and for 13 to 19 year-olds, it is 3 hours 20 minutes. Those are incredible statistics. Over three hours a week reading a magazine amounts to a serious amount of READING, regardless of format. Surely, that is what parents and teachers should care about the most? In fact, in the survey children still put magazines before the Internet as their main source of information.

In 2013-14, J’aime lire  had average monthly sales of  131,951 (source). This is a magazine called “I Love Reading”. See what I mean?
One of my earliest reading memories is from J’aime lire, and it is their comic Tom-Tom and Nana, which has been running in the magazine since 1977 and can be found in this country under the names Tom and Lilly in Adventure Box. These memories are as vivid as poring over Richard Scarry’s mesmorisingly detailed illustrations or listening to The Little Red Hen.

So what is missing here, in this country? Why are magazines considered as a lowly form of reading, or indeed, entertainment? I am not sure I have the answer to that, but what I can say is that a child who is introduced to magazines from an early age and who lives in a household where magazines are treated as just any other reading material, magazines will become an integral part of his reading diet, not a less important part.
And here is another problem: most newsstand children’s magazines in this country look like tat. They are cheaply produced and of course come with the dreadful plastic toy. Who is going to take them seriously? French magazines come with toys too, don’t get me wrong, but most have glossy covers, thick paper, made to last, rather than another disposable item in our throw-away society. See this magazine: 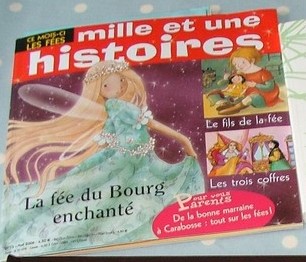 We kept it for YEARS until it finally fell apart. The cover illustration is by Cathy Delanssay (more about her later) who was one of my daughter’s favourite illustrators when she was a preschooler. It sat on the bookshelf, alongside her Cathy Delanssay picturebooks.

My point is that unless you make children’s magazines an item that not only children covet and want to collect, but parents see as good quality, you are never going to change the trend in magazines in this country.

You are probably wondering why I am telling you all this? 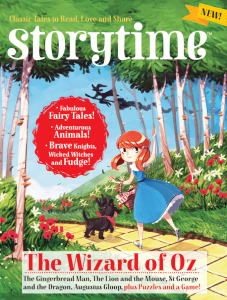 Well, issue 2 of Storytime Magazine is out today and I think this is well worth celebrating.
Here is a magazine with a team that finally *gets* what a great story magazine should be like. As soon as you hold this magazine in your hands, it is obvious how much thought and care has gone into it. Just look at the cover to begin with!
Storytime Magazine’s tagline is Classic tales to read, love and share and this it does brilliantly. The stories are retellings or extracts of traditional or classic children’s books and they can be accessed and enjoyed at different levels. They can be read aloud by a carer and they can be read independently by the child.  Each issue includes: a classic tale, myths and legends, tales from around the world,famous fables and plenty of activities. The artwork is vibrant and varies a lot in style, which is a great asset I think. Often magazines are stylized so much that it ends up putting off a lot of readers. By showcasing a variety of styles,  the magazine avoids gendering of the tales.
There is so much to interact with within the pages of this magazine, and there is quite a bit to read too, again going against the “read in five minutes and discard” feel of some of other children’s magazines.  Vitally, the designers have got it completely right: with its attractive  packaging and gorgeous varied  artwork, Storytime has that extra factor, that coveting and collecting factor. Children will want to put it on their shelves. It promises and IS so much more than other newsstand magazines.

If you need any more convincing, here are some sample pages from this month issue:

* The tale from around the world is East of the Sun and West of the Moon, with beautiful artwork from Nan Lawson: 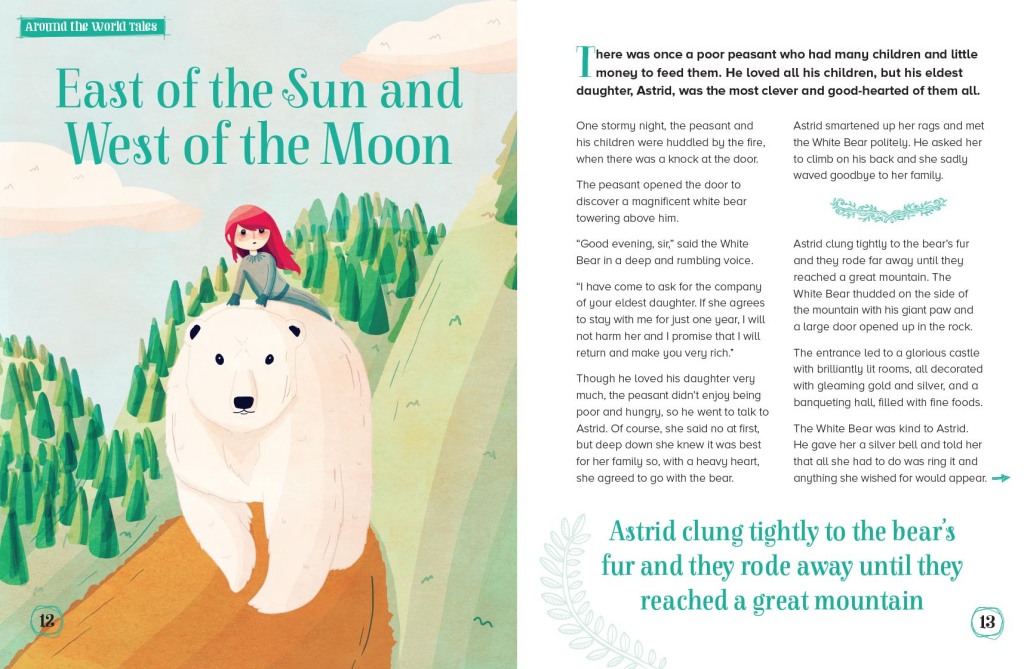 * One of the poems and rhymes feature is ‘Augustus Gloop’, from Roald Dahl’s  Charlie and the Chocolate Factory, illustrated Cathy Hookey: 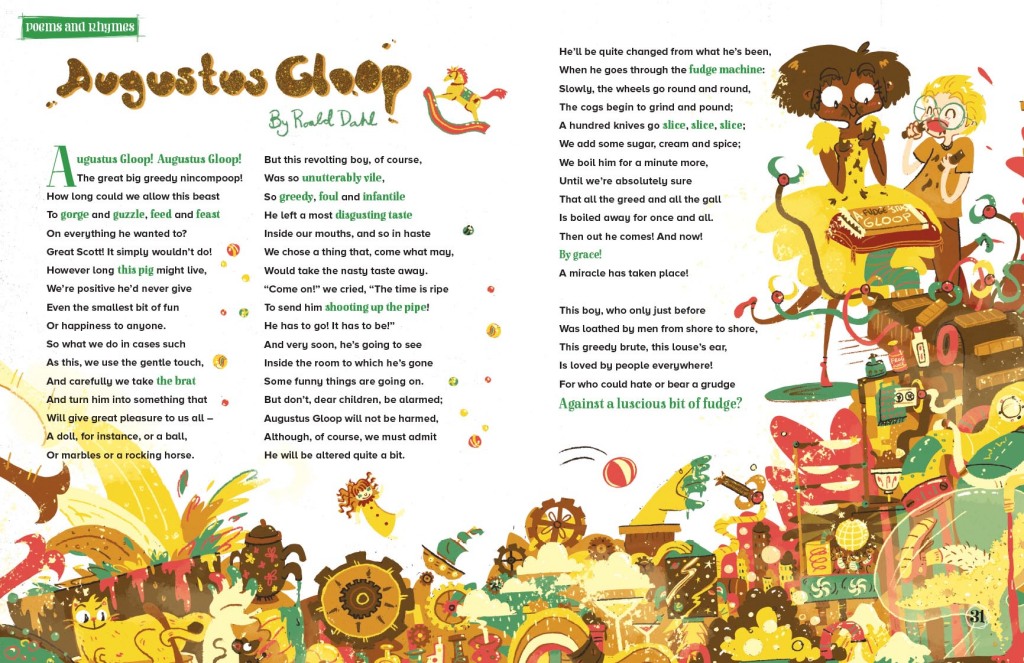 To demonstrate the interactivity of the magazine, here is the activity page linked to ‘Augustus Gloop’: 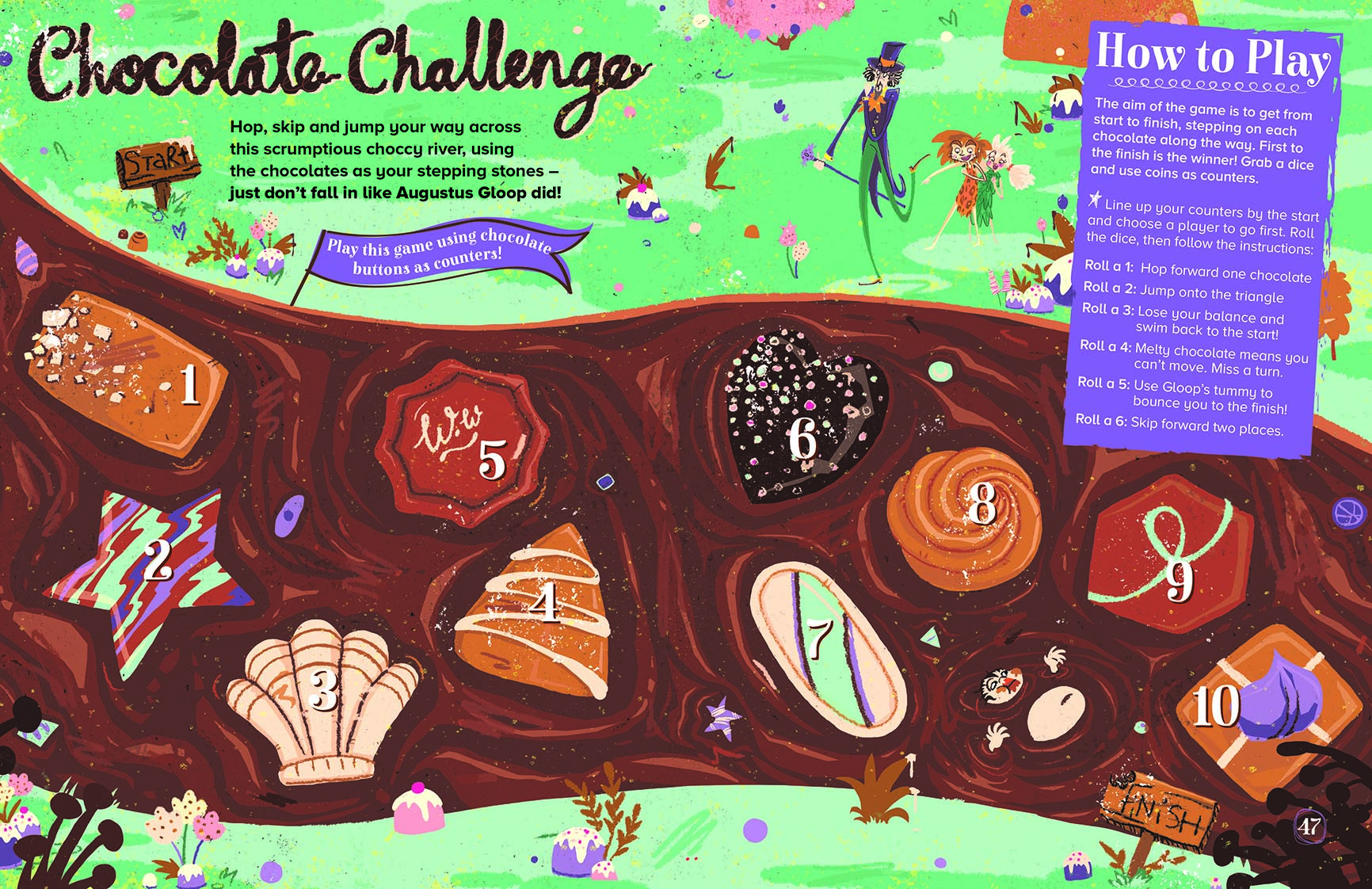 Another feature which I find particularly inspiring is Story Magic, a double page which features background information on each story and proposes extension activities. That sounds more formal than I mean actually; what it offers is extra ways to have fun with each tale! 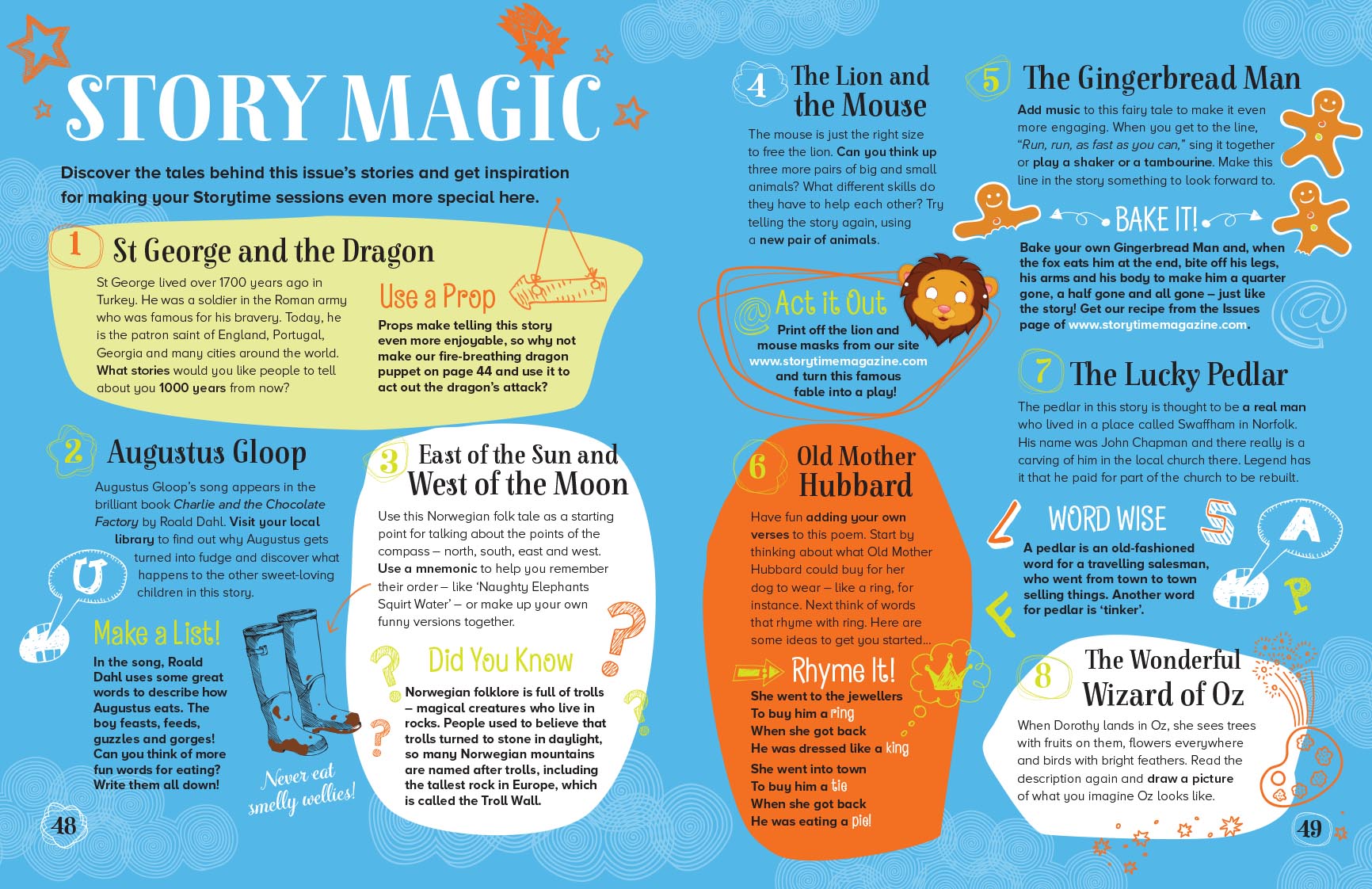 So there you have it, a beautiful magazine that ticks all the boxes, and unlike many independent children’s magazines, one that you can pick up in most supermarkets, which is no mean feat. I know I preach to the converted here, but having Storytime available in supermarkets  allows the magazine to reach those might not actively seek this kind of thing usually. It is a real success story, all round.

Finally, here is a sneak peek at the cover for issue 3. And yes, you may have recognised or guessed it, the cover illustration is by Cathy Delanssay, whom I mentioned earlier: 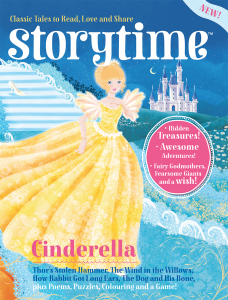 You can read an interview with the editor of Storytime Magazine on Playing by the Book if you would like to find out a bit more about the birth of the magazine. 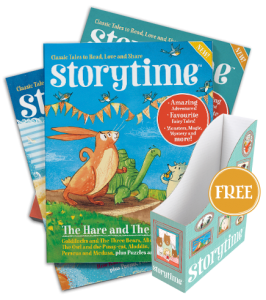 Issue 2 is out in newsagents and selected supermarkets today, priced £3.99
Don’t want to miss an issue? Subscribe! Children LOVE to get their own mail too! To do so, go here.
Each subscriber will receive a free collector’s magazine file, a perfect present for, you know, the C word (it is just too early to mention it yet).

Thank you to the good people at Luma Creative for providing a copy of Storytime.