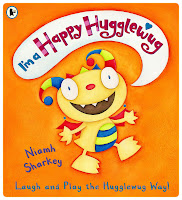 Meet the Hugglewugs, a lovely colourful family from a brand new species and follow as they go about their everyday lives: having breakfast, going to school, playing at the park, having dinner. All this in the happy, singing Happy Huggle way!

This bright picture book will be a winner with preschoolers. It tells a very simple story of a day in the life the Hugglewug family through depicting a series of different scenes from their daily routine. Despite being a different species from us, Hugglewugs lead very similar lives to us and young audiences will take great delight in recognising their own daily routines amongst the pages of the book. Although mere humans don’t get to go to school to learn to ROARRRR!, little people will undoubtedly  take great delight in joining the Hugglewugs in their practice! There is also an introductory song, Henry Hugglewug’s “My Hugglewug Song” and concludes with Henry’s “My Hugglewug Lullaby” (with a beautiful and adeptly coloured double-spread accompanying it). As young readers follow Hugglewugs go about their daily business, there are also plenty of opportunities to learn to count and learn new words.

This beautifully coloured picture book is a real showcase of Niamh Sharkey’s talent as an illustrator. Her use of oils and the most vibrant colours results in the most strikingly-coloured illustrations. My 6 year-old daughter commented on this straight away when we read I’m a Happy Hugglewug together. Niamh’s style is instantly recognisable, and those little monsters are seriously cute! I really like the layout of the book, particularly in those double-spreads which include a large illustration depicting a familiar scene on one side, and lots of other details on the other:

The illustrations are plentiful and very detailed, offering plenty of opportunity for discussion between child and adult during storytime as well as opportunity for the young audience to pour over the pages and discover all the little details. The typography is lovely too, and adds an extra feeling of fun to the book. 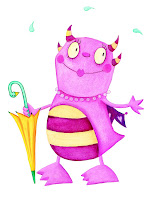 This is a real fun book which will be a hit with preschoolers and also provides a great opportunity to show school as a non-threatening and fun environment for those who are on the verge of starting that very big adventure. It also showcases a very positive image of families, which I think is lovely.
I only wish Walker had published an edition with a CD, as it would have been great to hear what the Hugglewug song sounded like!

Sent by publisher for review