GUEST POST: Tor Freeman talks about the inspiration behind The Toucan Brothers

Tor Freeman was born and educated in London and graduated from Kingston University with a BA in illustration in 1999. Although most of her life has been spent in London, time spent living in California and her mother’s home in South Africa have influenced her work today.  In 2012 she was awarded the prestigious Maurice Sendak Fellowship, the last one to be awarded whilst he was alive.  Her other books include the Olive series for Templar, as well as the hilarious Babies Don’t Bite for  Hodder Children’s Books (which I reviewed here)
Tor currently lives and works in North London.

You can find out more about Tor on her website and her blog .

My inspiration behind The Toucan Brothers
By Tor Freeman 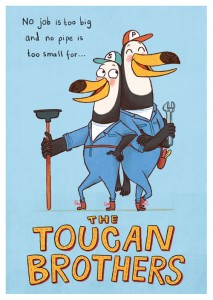 One day a few years ago two taps in my flat started to leak. I tried to fix them myself – I went to a plumbing shop, and I bought the right tools and a book about how to fix things in your home. And surprise, surprise, I made it much worse; so then I had to call a plumber.

This experience got me thinking that it would be fun to do a story about plumbers, because of all the nice words I’d be able to use – like spanner and U-bend and plunger. And it made me think about how important it is to do something well – and what can go wrong if things aren’t done right, by the people who know how!

I’d also been looking a lot at Doctor De Soto, by William Steig, who is one of my favourite illustrators and writers. Doctor De Soto is a story about a dentist and his wife, and how they outsmart a wicked fox who plans to eat them. I loved the idea of doing a book about characters with a profession, and all the stories that that profession might suggest.

As soon as I thought of plumbers I knew that I wanted them to be brothers who worked together, and I knew I wanted them to be toucans – I don’t know why, it just seemed like a jolly idea. I thought that toucans holding specialist plumbing equipment would look funny; and after drawing the book, I still think so!

One of my other favourite picture books is Horton Hatches the Egg by Dr Seuss. It’s about being faithful and true, and keeping your word, and I

wanted The Toucan Brothers to be about that too – Sammy and Paul are reliable and honest – not flashy, like Flash Rover – and in this story, all that glitters really isn’t gold!

I put a plumbing joke in, which sadly got outdated even before publication – Flash Rover is a corgi dog, because in the UK you had to be CORGI qualified in order to safely service gas boilers. Ha ha ha! But I’ve now learned that CORGI registration has been replaced by the Gas Safe Register – and try thinking of an animal joke around that! And, as I had to explain this “joke” to everyone I’ve shown the book to so far, I guess it won’t be much missed!

Thank you so much Tor, for a great post. I do love the CORGI joke!