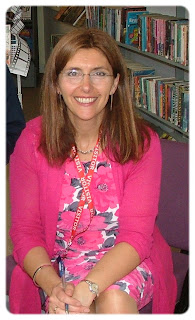 I always feel slightly embarrassed when I’m talking to other new and aspiring authors. Everyone has tales of writing for years, entering competitions and honing their craft before, if they’re lucky, getting that first deal, but I did none of that. I wrote a story for my daughter’s birthday, the first time I had written fiction since school, and it’s now in my local bookshop and hundreds of other bookshops around the world. I still don’t believe that it has happened.

I’ve always been a huge fan of reading, and when I started commuting into London I found it gave me time to read, time which otherwise was missing from my day as a fulltime headhunter and mother of two. When my daughter started reading teen and YA literature I added them to my pile of ‘to be read’ books as I was keen to see what she was interested in. The answer was mostly romantic fantasy with more than a little smattering of vampires. I loved the fact that she was reading, but I was disappointed with the fact that all the books were set in the States, a place where she had never been. I began to wonder if I could write her a story which was set in the world she knew, so I picked up an old notebook and started to jot down some thoughts. At that point I had never spoken with a ‘proper’ author, so I didn’t know how hard it usually is. With blind faith that I could write something my daughter would enjoy, I carried on. I solved the logistical problem of how I was going to write it in the time available by using my BlackBerry – every day on the train I wrote a bit more and then emailed it to myself. At the weekends I stitched it all together on my laptop.

I wrote a story about teenage love and loss, with a supernatural element (as a mother, it helps if the love interest is utterly unobtainable!), and set it around London, Twickenham and Richmond: places which my daughter knows well. I wrote about her school, her friends and her home, and I made the main character, Alex, the sort of girl my daughter may become in a few years. Callum is unbearably gorgeous and love is swift (I knew my daughter would be impatient for that), but hideous problems lurk just ahead. By the time I had finished writing I knew that, if she wanted more, I could continue the story. I got two copies printed and bound and gave them to her for her birthday, and within days they were doing the rounds of her class at school.

I was finally persuaded to seek a professional opinion and a colleague put me in touch with Kate Wilson, who had just left Headline. All I was really after was some small encouragement and – ideally – an introduction to an agent or two who might be interested. I got a lot more. Kate so loved the book that she bought forward her plans to set up her own company, and exactly a year after she and I first met, Small Blue Thing was published in January 2011 as Nosy Crow’s first book.

Small Blue Thing was followed by Perfectly Reflected in June and just last week the final part, Scattering Like Light, was published. The trilogy is now complete, and it’s been brilliant getting the feedback from the readers; either directly from my daughter’s friends and kids on school visits, notes on the website or actual fan mail. Some are obviously not big readers, but I’ve helped to encourage them to pick up a book, and that’s fantastic!