Today I am really pleased to feature a book which I think really is super in many ways and this book is Electrigirl by Jo Cotterill and Cathy Brett. We are always after engaging middle grade fiction; well, you don’t get much more engaging than that! 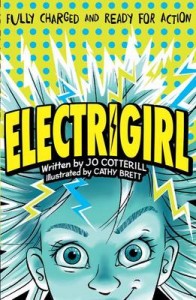 When mobile phone company CyberSky set up new offices in Holly Sparkes’ hometown and decide to   thank locals by giving every one over the age of ten a free mobile phone, Holly and her best friend Imogen are quite excited to begin with. But Holly soon loses interest in hers and when Imogen becomes obsessed with playing a quiz game on it and begins to neglect not only her beloved sketchbook, but also their friendship, Holly becomes increasingly worried and suspicious. When one day she runs for solace to the hillside, she is struck by a strange bolt of lightning, and as a result she finds herself with electric superpowers, creating much mayhem at first. With the help of her brother Joe however, she begins to control her newfound powers,  and becomes determined to find out what Professor Macavity is really doing behind closed doors at Cybersky.
Part novel, part comic, Electrigirl  (OUP Children’s Books) is a real exciting new kid on the block of middle grade fiction. The format is really clever – prose when Holly is being “herself”, and comic when her superpowers take over. This gives a great pace to the story but also allows for the text to be broken up and be accessible to more readers. 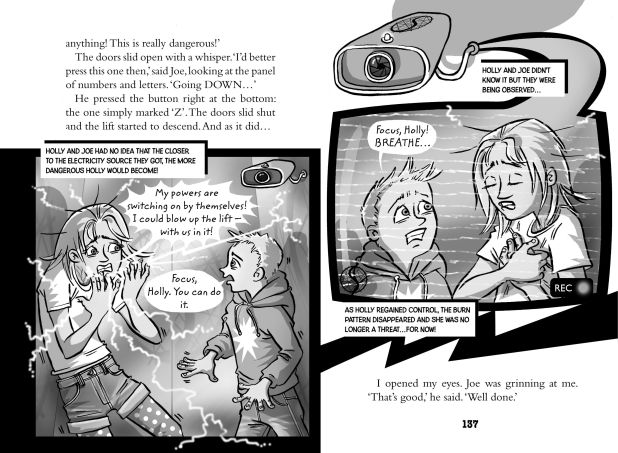 Holly is a great, and much needed, character: a girl who doesn’t like school much but who loves PE, who seems to have a short concentration span and engagement levels … those are usually ‘characteristics’ given to boy characters, a stereotype that is quite damaging across genders. It is so refreshing to find a book where girls who might feel this way can see themselves reflected, and for boys to see that actually it is only boys, as they keep being told. The female protagonist does not make this a “girl book” (the cover helps a lot at breaking that barrier) : the format, the action, the humour, the baddie, the sidekicks ( both so imperative to the superhero comic format)  make this an engaging read for everyone. 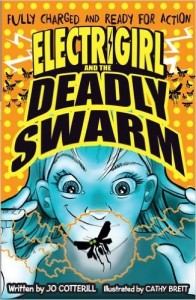 As well as this there is a great message of the potential social damage of excessive use of mobile phones, which again is very potent for the target audience.  Electrigirl is such a great book on many levels, and it is great fun too and a fabulous way to introduce comics to a new audience. What else could one want? A sequel, of course, which thankfully is on its way in August: Electrigirl and the Deadly Swarm. Can’t wait!

I was delighted that Jo and Cathy agreed to chat about their collaboration: 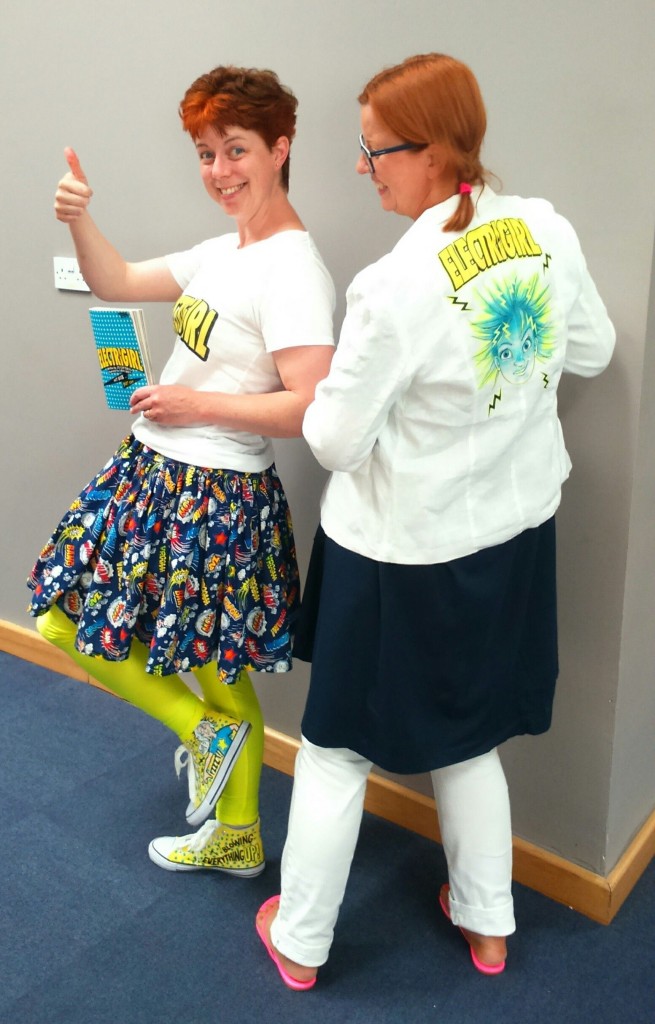 JO: So, Cathy, we’re finally here, after three years of working on ELECTRIGIRL. Sometimes it seemed an impossible dream! Three years since I persuaded you to take a risk on a bonkers not-done-before book, making you draw in a way you’d never drawn before. Tell me, now that the book actually exists, did you ever think of pulling out? Saying, ‘Sorry, Jo, I just don’t think this idea is going to fly’?

CATHY: Honestly? No. I always had a feeling that it would work, even when I was having a ‘bad drawing day’, we just had to find the 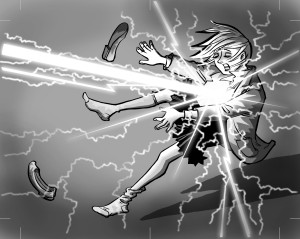 right publisher. I know how much the 7-12 age group LOVES comics and books with lots of pictures, even if those books were sometimes regarded as guilty pleasures. My visits to schools and riotous live drawing sessions have taught me that! You knew too, right? That’s why you had the idea for ELECTRIGIRL! But we’ve both been involved in publishing long enough to know that’s often not enough. We both saw the signs that the market was shifting in favour of heavily illustrated fiction. Two of us fighting for the project was a massive advantage too. And who doesn’t want to illustrate a girl superhero?!

Did you feel the same? I know you can be quite stubborn!! 😉

JO: Haha! You know me so well 😉 There was ONE point when I thought, ‘You know, if this book isn’t accepted in this form, I don’t think I want to do it any more’. It was when our agent wanted me to change a few more things in the manuscript – and we’d already been working on it for about 18 months, and I’d already done countless rewrites. I just thought, ‘Enough is enough.’ I’d worked on it so much I was in danger of losing my passion for the project, and I knew that would be awful, because I really, REALLY wanted it to work. I dug my heels in and refused to do another rewrite – and then OUP said they wanted to take a risk on it, and I was OVER THE MOON because secretly they were the publisher I wanted on board all along! So it was worth it in the end 🙂

There are over 60 pages of artwork in this book, which is waaaay more than an illustrator would usually provide. Which were your favourite pictures to draw? And which ones made you grind your teeth in fury or frustration?

CATHY: Ha ha! Once or twice I did find myself muttering, ‘you’ve got to be kidding me, Jo, how do you expect me to get ALL THAT into ONE drawing?’! But no fury, I promise. My favourites are probably the ‘blowing-up the class room’ sequence and the cover, which, strangely, are some of the first drawings I did before we even showed Electrigirl to our agent, let alone a publisher. In fact, I actually did the first rough sketch of that cover idea on the day you asked me to come on board with the project. Isn’t that cool?

CATHY: What made you grind your teeth? Not me I hope! Was it those endless edits?

JO: You never made me grind my teeth! In fact, seeing the roughs of the comic strip was so exciting, it made the whole thing seem so much more real! Yes, it was the endless edits. I’m not a natural editor; I write quite tight first drafts, so rewriting them always feels painful. Of course, this is how publishing works, so I’ve got used to it over the years, but it’s still my least favourite part of the process!

Electrigirl is a new type of book for both of us. When we’re not creating superheroic stories for our characters, what other books and projects are you working on?

CATHY: I’ve not had one of my own books published since Everything Is Fine (And Other Lies I Tell Myself) almost 3 years ago, which has actually been quite a nice break. I’ve had the chance to put a lot more energy into illustrating other people’s books – authors 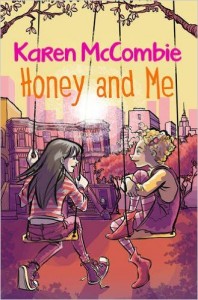 like Melvin Burgess (Persist) and Karen McCombie (The Girl with the Sunshine Smile and Honey and Me) – which I’ve absolutely loved and it’s released me from the pressure all authors face of having to keep coming up with new ideas and new books, year after year. That can be quite a treadmill, as you know, Jo.
There was another reason for the 3 year break: building my own house/studio! It’s been a dream of mine for EVER which suddenly became a potential reality when my parents offered a building plot at the bottom of their garden. Of course I said ‘yes please!’ and since then it’s been non-stop planning, contracting, organising and crisis-management. All rather exhausting and, quite frankly, it’s amazing I managed to do all those illustrations at the same time. It was exactly like the self-build TV shows with months of stressful mud, absent builders and plumbing disasters! It’s done now, thank goodness! I moved in at Christmas. But, there’s no time to kick-back and enjoy it because I’m now working on the illustrations for (drum-roll please) ELECTRIGIRL AND THE DEADLY SWARM, which is fantastic! A great story! And when that’s done, I’ve three projects of my own that have been waiting for me to dive straight back into. One is a hilarious picture book, one a middle grade horror comedy series (with pictures, natch) and the third is a dark, gothic YA novel. Phew!

You’ve had several super novels published while we’ve been working together, Jo, one of them Carnegie nominated, no less! I know that you are working on new projects too. What’s next? And what will the future hold for a certain sparky 12-year-old?

JO: Yes, Looking at the Stars, my refugee novel about the power of storytelling, has done ever so well. I’m really thrilled that so many people have read and loved it because it really encapsulates everything I believe about the importance of imagination in humanity. 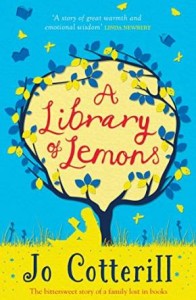 Next up in May 2016 is my 9-12s novel A Library of Lemons, published by Piccadilly Press – another one that went through FAR TOO MANY edits! But I am really, really proud of it because it’s all about friendship and the importance of reaching out and making connections with others. It means a lot to me personally because I think I’ve grown on a personal level over the past two years too, making new friends and finding out what connections mean to me. As for Electrigirl, well, as you know a sequel is on the cards – ELECTRIGIRL AND THE DEADLY SWARM, out in August this year, hurrah! I would LOVE to write more adventures for Holly and co, so we’ll just have to keep our fingers crossed that the public likes her enough to warrant more in the series!

Thank you so much Jo and Cathy!

Electrigirl is published by OUP and is out now.  You can buy a copy here.