I discovered Alex T. Smith’s work earlier this year thanks to Emma, who worked at Hachette then, who sent me the first adventures of Claude, Claude in the City, to review. I was won over straight away, and how could I not be? Alex is not only a great artist but is also able to pen quirky, funny and highly original tales, such as the Claude books, but also EGG. I was really chuffed that Alex agreed to take part in my Fabulous Five feature, to celebrate the publication of Claude on Holiday, which is out today! 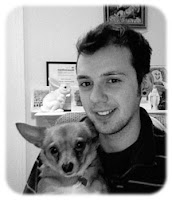 After briefly considering careers in space travel, cookery and being a rabbit, Alex T. Smith finally decided to become an illustrator. In 2006 he graduated from Coventry University with a 1st Class Hons degree in Illustration. Whilst studying there, Alex won second prize in the Macmillan Prize for Children’s Picture Book Illustration in 2006 and was highly commended for the same award in 2005. He has just won the 2011 Dundee Picture Book Award for Bella & Monty: A Hairy, Scary Night.
Alex lives in York with his wife and four tiny, but apparently very bossy, dogs!

I’ve always wanted to be a children’s book writer and illustrator, right from when I could first hold a pencil. I just love drawing. But when i was four, my parents took me to the theatre to see Aladdin and I sat there wide eyed and open-mouthed. The show itself was fairly entertaining, but what I loved was the costumes the characters wore and the wonderful sets. After that I went to the theatre a lot as a child and whilst I enjoyed the performances, I really went to see all the clothes and settings and would sit making mental notes on everything so I could draw and redraw it all when I got home. I did the same with films I watched. I liked the way that so much could be said about a character with what they were wearing.


As a teenager I was lucky enough to do an internship of sorts at the local theatre’s brilliant set and costume workshop. Here I worked on costumes, helped with props (wasn’t trusted near the power tools for the sets – am too clumsy!) and shadowed some amazing designers. I then went on to work for a few summers as a designer for an outdoor theatrical company, working on and designing costumes for carnivals. When it came to going to university it really was a toss up whether I went to study illustration or set and costume design for film and theatre. I went with illustration in the end. I found that I could combine my enjoyment for designing clothes and setting in my work in children’s books.As an illustrator you are essentially doing the job of a director, set designer, costume designer and lighting designer as well as being(or at least drawing) all the actors. It suits me perfectly!


Here are my top five books features chic and stylish illustrations. Most of them have a mid century feel because as well as spending my days writing and illustrating children’s books, I spend a lot of my time imaging I live in New York or Paris in the 1950s/60s. (or at least an episode of ITV’s Marple – which are surprisingly stylish if you pay attention!)

Eloise
Kay Thompson, illustrated by Hilary Knight
I love this book. I came to it fairly late ( i.e as a grown up!) and instantly fell in love with Eloise and the book itself. The set up is very glamorous to begin with – a very rich, very naughty little girl living in the penthouse apartment in the Plaza Hotel NYC in the 1950s, but the writing and the pictures just sizzle with style. Hilary Knight’s black, white, red and pink illustrations burst and jitter across the pages and really bring the precocious little New Yorker to life. What I really love about this book though is all the details in the background of the pictures – the stylish ladies in the hotel lobby with their tiny hats and high heels and the hotel staff with their pristine uniforms. I also think Eloise should also be considered a style icon – her tips on grooming are priceless (she uses a fork to comb her hair…) I think this book is a must read for any (naughty) little girls and precocious grown ups!

(Embarrassing Fact: When I visited New York I dragged my wife straight to the Plaza so I could get my photo taken next to Eloise’s portrait in the lobby!) 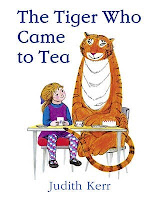 The Tiger who Came to Tea Judith Kerr
I have loved this book since I was absolutely tiny. The story itself is a cracker – a (GIANT!)tiger rolls up to a house at teatime and gobbles up all the families food before disappearing into the night ( sounds like when my nephews come to visit me…!), but it’s the illustrations that do it for me. I love the sparseness of the compositions coupled with the details of the mum and the little girl’s outfits. The whole thing is very Mad Men – especially when dad come home in his suit and hat. Also, I might as well confess this now, but I have lived my whole life longing to go out at night wearing my pjs to a greasy spoon cafe for sausage and chips like the family in this story.

Probably shouldn’t have admitted that… 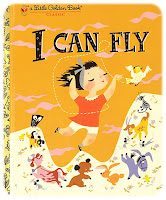 I Can Fly
Ruth Krauss, illustrated by Mary Blair
I admit that this book doesn’t feature lots of very stylish outfits or glamorous locations (although the little girl in the book IS always nicely turned out!) and the story isn’t much to write home about either, but what this book is about ( for me anyway) is the beautiful artwork. It’s stylish in the sense that the paintings are beautiful pieces of art- popping with colour and pattern and 50s styling. Mary Blair is one of my all time favourite artists. She worked for many years at Disney working on the production design for many of the early animated films – most notably Alice in Wonderland and Peter Pan. She is also famous (or maybe infamous depending on your view) for creating the It’s A Small World ride at the Disney parks!) I think her work is brilliant and in this book she brings plenty of charm and stylish design to what is a bit of a flimsy text. ( I’m also particularly keen on the little girl’s red shoes and blue socks combination she wears in some of the spreads!) 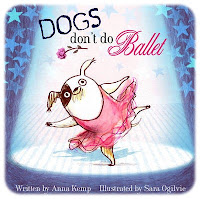 Dogs Don’t Do Ballet Anna Kemp, illustrated by Sara Ogilvie
A contemporary book here – and a delightful one too! This book is really fun – combining a funny, quirky story with lively illustrations. I love the attention to detail Sara Ogilvie has paid to her characters, dressing even the tiniest of background characters in slightly retro outfits. She also brings the world of the theatre to life with drama and excitement in her bluey – turquoise colour scheme accented with orange and red. I particularly like the scene at the bus stop near the middle of the book where the busy city street is presented in neutral light browns with the people in the bus queue wearing an array of stylish outfits. There’s also a beret on this page so Claude will be pleased by that! 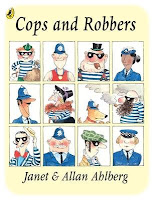 Cops and Robbers
Allan Ahlberg, illustrated by Janet Ahlberg
I’m not sure whether this is the same for other children’s book illustrators, but for me there are some books that I read as a child which contain scenes which have stayed with me since I first saw them and really had an influence on my work. The cross section of the police headquarters in this book is one of them. I loved looking at and finding all the things in the picture and I suppose looking at it now – it’s quite a ‘stagey’ way of illustrating the bustling nature of the police force. You can imagine the illustration being made into 3D and planted onto a stage for a live action version of the book. It’s a great piece of artwork and an unusual of way of showing the goings on in a building.

The other reason I love this book and find it very stylish, is the way in which Janet Ahlberg has used clothes to give the reader an idea of the different personalities of the characters – particularly the robbers. When I visit schools, I always tell children that to be an illustrator you need to have a good imagination and think about how to draw things in a creative and unusual way. I think Ahlberg has done this brilliantly here. Keeping similar (quite stereotypical) outfits for the robbers she adds a few little accessories and you know exactly what sort of a person that thief is – so important when you are ‘reading’ a book through the pictures as many very young children do. I also find the elderly female robber with her fox fur stole and over the top make up very funny. I always have and always will – which is one of the reasons I made the thief in Claude in the City quite so glamorous ( in a will-rob-you-in-the-blink-of-an-eye kind of a way!)

Thank you so much to Alex for taking the time to do this, and what a great Fabulous Five it is too! We LOVE  Dogs Don’t Do Ballet in the Library Mice household, and a couple of years ago we went to see the stage version of The Tiger Who Came to Tea, which was amazing. I shall definitely investigate I Can Fly!

Leave a Reply to Do My Assignment For Me Cancel reply