Keys to the Repository 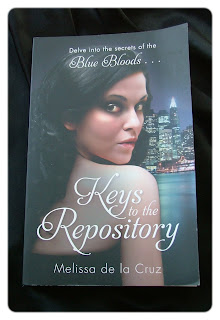 Enter once more the fabulous world of the Blue Bloods, the vampire elite, and sneak a peek at their deepest secrets!

Below the streets of Manhattan, sheltered from prying eyes, is hidden the Repository, the “library of Alexandria” for vampires, where all recorded movement from Blue Bloods, mostly unbeknown to them, has been kept. In this volume the author presents us with the keys to the Repository, giving us an opportunity  to delve into short stories, journal entries and letters, some of them dating back through time, allowing us to quench our thirst for more, more, more about the Blue Bloods!


I love Blue Bloods (see my review of the series here), and I know it has a strong, dedicated and well deserved fan base. Within the deluge of supernatural teen series, few really stand tall amongst the rest and this is definitely one of them. It is well written, it is clever, and I love the historical side of it.
This volume was published in June and is meant as a companion to the series, but it is not to be read before the latest volume of the series, The Van Alen Legacy, as it contains many spoilers. This is both a good and a bad thing. It is a good thing because you know the characters well enough now to want to hear about their past. It is a bad thing because I think it would be great to be able it to read alongside the series, specifically the information about the main and secondary characters; sadly the spoilers make it impossible. But it was well-timed in the fact that it wets our appetite for the upcoming Misguided Angel and even offers a sneak peak of the first chapter … not that the fans need that; if they are anything like me they are already eagerly awaiting it! It also brings extra information about some the events that we have previously read about in the series.


As a librarian, I love the idea of the Repository, the way it is hidden and protected and given so much respect within the community. If only everybody felt that way about their libraries …


This anthology is a great companion to the series and is definitely a must for any Blue Bloods fan! Now, who is counting the days till October 26th?