UK-based Manga studio Sweatdrop Studios presents us with a beautiful anthology of fairy tales from across the world; some you might know (The Snow Queen, The Prince & the Pauper), some you might not (The Three Feathers, The Mouse, the Bird and the Sausage). Even though many of those tales will be unknown to the reader, many of the familiar recurrent themes of traditional tales are present here : darkness, magic, love, greed, jealousy, retribution, loss, longing … The manga artists who have contributed to this anthology have chosen tales that inspired them and this shows. The artistic styles differ greatly but are all of a similar high quality, and I am sure each reader will have very different favourites.
Mine were Alenushka and Ivanushka by Svetlana Chmakova (a guest creator brought in for this anthology), The Snow Queen by Sonia Leong and Little Red Hiding Hood by Marubelle Sinclaire. I loved the artwok in the first one particularly and I thought the take on Little Red Riding Hood was hilarious and very clever. 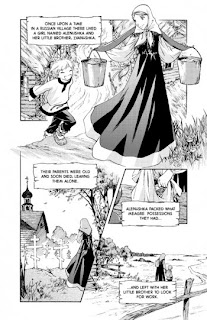 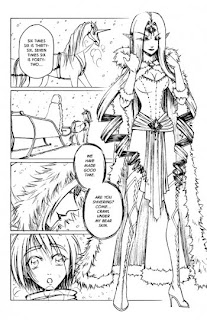 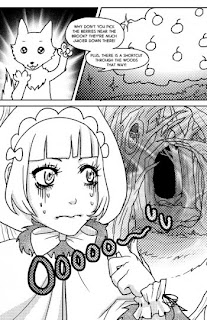 I am really happy to see UK-based artists make their mark on this ever-growing market. There is a lot of talent out there and not all of it lives in Japan! Also, for newcomers to manga, this has the advantage of being read left to right, as opposed to the traditional manga way, which can be a bit confusing at first.

All in all, this is a lovely anthology which I was very much looking forward to reading and was not disappointed once I did. The only downside, as ever with Manga, is that the reading experience is always over far too quickly. Oh well, I’ll just have to read again.