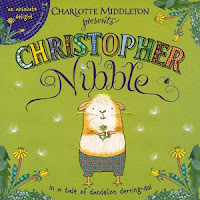 Christopher Nibble and the other guinea-pigs of Dandeville love nothing more than nibbling on dandelion leaves. All day, all you can hear in Dandeville is the sound of munching … until, because of all these greedy guinea-pigs, the dandelions start to run out!

Soon, dandelion leaves are disappearing off menus and fetch a lot of money on certain bidding sites … The guinea pigs are reduced to eating manky old cabbage, and that’s just won’t do. So when Christopher finds one lonely dandelion growing outside his bedroom window, he decides to take action to make sure that this last chance at keeping dandelions does not go to waste.


The first thing that my son said when we read this book at bedtime, was “oh, it looks just like Charlie and Lola”. I can see what he meant by that: 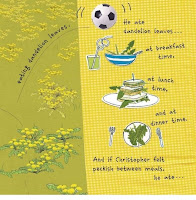 After a little more prodding he did say that the illustrations were nothing like the famous siblings’ but that the format was very similar, especially in illustrations such as the one above, with the side illustration, and the use of mixed media and collage.


But the comparison ends there, because Christopher Nibble is a little jewel all on its own. The story itself is very sweet: Christopher is a very cute unlikely hero, who quietly gets on with solving the dandelion issue without need for reward or recognition. His dedication to the task is exemplary, and I have to say as a librarian I command is use of his local library to retrieve the information he needs: 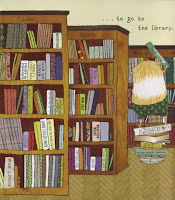 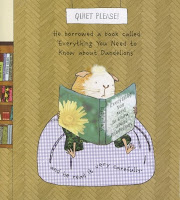 The book is also a great tool to explain sustainability, a concept which is not usually particularly child-friendly. This is one book which will have countless uses in an infant school setting; it is so satisfying to find a book which carries so many positive messages, and has plenty of dotted bits of humour as well.


I dare you not to like this cute guinea-pig (just look at his face on the cover!), and not to enjoy this very charming story.