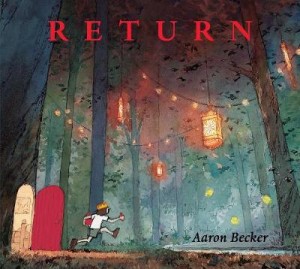 Return is a spectacular culmination to the story told in the incredibly imaginative trilogy which began with Journey, (see the guest post by Aaron Becker here). A little girl, ignored by her father who is hard at work drawing (incidentally), uses her red pencil to open a door to an imaginative world full of adventures. The lines between reality and fantasy are blurred throughout but clues are dotted within the depictions of the ‘real’ world to hint that the alternate parallel world are a creation of the girl’s imaginative play. This once again highlights the power of wordless narrative and how it encourages forces readers to read images carefully. The use of colour is particularly potent here, allowing readers to spot these little details but also has a very powerful way of conveying the importance of imaginative play and creativity for children, but also our role as adults not only to nurture this but also not to expel ourselves from it. The role of the father is very important here – he obviously draws for a job, but has, it seems, forgotten to have fun with it. His daughter’s adventure leads him to liberation.  Becker’s love for architecture shines again, and the opening and closing spreads of the book offers two different versions of the same view of the flat and New York behind it, encircle the narrative beautifully, highlighting this very message again. The Journey trilogy is one of the most accomplished wordless narratives published in the last few years. 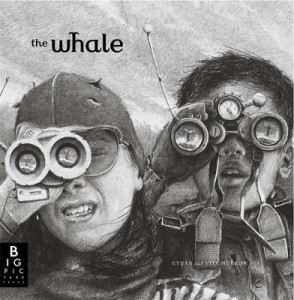 This wordless narrative uses photorealistic pencil drawings to tell the story of two young daring adventurers as they separately begin a journey to find legendary yet elusive Great Spotted Whale. Both are armed with different tool to help them in their quest but when their boats collide, they join forces and their team-work allows them to catch a much-coveted sighting. A lovely story of tenacity and the importance of collaboration, the incredibly detailed artwork in this book really showcases how powerful images are and how wordless picturebooks can offer incredibly complex and multi-layered narratives. The opening and concluding pages show the front page of the local newspapers, giving the story some context, but in between, readers are invited to create their own story and imagine what the dialogues and emotions of the two characters might be. The darkness conveyed by the pencil helps highlight the power and dangers of the ocean. It is a visually stunning book, and requires many readings to fully appreciate its depth. 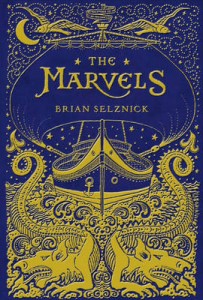 Selznick’s take on storytelling, using separate textual narrative and wordless visual narrative, is unique and spellbinding and The Marvels might be his best yet. The book focus on family sagas; the first half, told visually with intricate pencil drawings, begins in the eighteenth century with Billy Marvel, sole survivor of a shipwreck and follows his family of actors for five generations. The second half, in prose, takes place in the early 1990s and tells the story of Joseph who has run away from boarding school and finds himself staying in his estranged uncle’s peculiar and rather unnerving house. Both seem unrelated at first but gradually readers, alongside Joseph, are encouraged to unravel the mysteries surrounding the house and its inhabitants. Superbly told, full of mystery and wonder, this is a mesmerizing tale celebrating the power of story. The unscrambling mystery will amaze readers, and its resolution is emotionally charged but beautifully rendered. The tour de force, here, is that the clues are there all along for readers to discover. It is a truly immersing reading experience and a simply superb book.
Have a look at how Selznick works here. 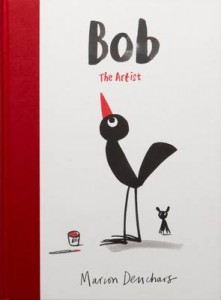 Bob gets teased because of his skinny legs and despite many attempts, he cannot change them. Defeated, he goes for a walk and finds himself in art gallery where he finds inspiration and a brilliant solution to his low self-esteem. The use of bold lines and dark colours on white space creates the perfect platform to introduce the vibrant colours of art in the second half of the narrative. This is a ludic introduction to modern art, with a potent message about its power and the importance of finding the confidence to be onself. An uplifting tale and a fabulous opportunity for some art activities and trips to the museum! The fingerprint cat from Deuchars’ activity books even makes an appearance!

(first published as Library Mice picturebook of the week) 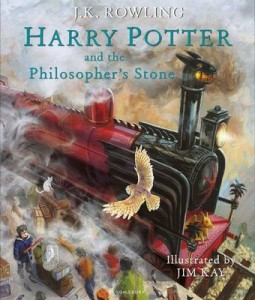 It can’t have been easy taking on the job of creating a new visual adaptation for the Harry Potter world. There is no other literary creation that has a made an impact on culture across platforms the way Harry Potter has: whether it is the books and their covers, the audiobooks read by Stephen Fry, and of course the movies which have brought a unique visual dimension to the books. Kay manages to strike the right balance, by both remaining faithful to those images that are already etched into our cultural heritage while breathing new life into it. Readers who are already accustomed to the Harry Potter world will therefore be satisfied, while discovering new details that Kay has decided to focus on while new fans will delight in their first introduction to JK Rowling’s fantastical imaginings. In fact, it is the perfect first introduction to Harry Potter. For a seasoned reader like me, the real delight of this book is Kay’s splendid depiction of Diagon Alley.

source: review copies from publishers, apart from Harry Potter and the Philosopher’s Stone (blogger’s own).