Today, I am welcoming Nicola Killen to Library Mice for the latest Fabulous Five feature. I came across Nicola’s work for the first time at the 2010 FCBG conference (I discover so many wonderful books every year at the publishers’ exhibition there), as there were proof copies of Not Me! on the Egmont stand. I loved the gorgeously coloured pictures which oozed childhood mischief and innocence, and I reviewed it here. In October this year, Egmont published Nicola’s second picture book, Fluff and Billy Do Everything Together, which I reviewed here. 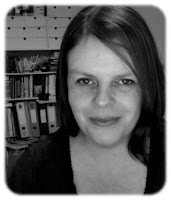 Nicola Killen had a successful career in design before moving to children’s books. She graduated from the celebrated MA in Children’s Book Illustration at Cambridge School of Art where she won the Best New Talent Award. Her first book, Not Me!, was published by Egmont to great acclaim and praise. Earlier this year, she was part of a handful of authors and illustrators named as Books for Keeps Rising Talent for 2011 (see here).
You can visit Nicola’s blog here.

My Fabulous Five childhood favourites
by Nicola Killen
For my Fabulous Five I have selected five books from my childhood in the 1970s. They are all books that I owned and loved. I have tried to describe what it was that made me cherish these particular books: humour and flawed characters seem to be the emerging themes! 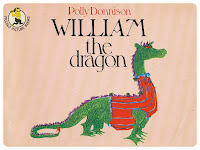 This book was my absolute favourite for several years.  When Lady Wilmount discovers an enormous egg under a yew bush in the grounds of Wilmount Hall, she decides to hatch it in front of the fire.  She was not expecting William, a roast-potato-loving dragon, to emerge!  In the last of the five stories in the book, William sneaks his new coat from Harrods, which he feels very silly wearing, into a box of jumble.  I shared his disappointment when Lady Wilmount returns from the sale having bought back the coat!

I didn’t realise that Polly Donnison had written this book when she was only fourteen until recently.  The illustrations have a naive quality, combining felt tip and coloured pencil, but it is the humour within the stories which really won me over all those years ago.

I was a big fan of all the Topsy and Tim books.  I think I could relate to the way they often made mistakes.  This title was extra special as they learn to swim at Parkside Pool in Cambridge – where I used to swim too!  Even details like the tickets, changing rooms and foot-bath all matched.  I found it so exciting to see somewhere I knew illustrated in a picture book.  The 70s outfits still look great! 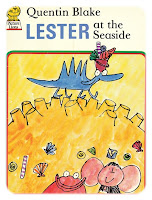 Lester at the Seaside
Quentin Blake

It was hard to choose which Quentin Blake book to include in my selection (Snuff and Patrick came close), but I eventually plumped for Lester as I loved the quirky array of characters he and his friends encounter as they make their way from their home under the General Hardware tree to the seaside.  This book also introduced me to the concept of palindromes – Otto gets very disappointed when he realises that his name written backwards in the sand is the same as when it’s written forwards!  This scene has always stuck in my memory.

Again it was hard to make a choice between this, The Early Bird and the Best Storybook Ever.  I remember taking The Supermarket Mystery on a family holiday – I can’t remember which one but it involved camping in the rain!  They all did.  Anyway, this book kept me entertained despite the weather.  Dudley and Sam, two inept detectives are hired to find out who has been stealing food from Grocer Dog’s supermarket.  After several mishaps and false accusations they finally ( and accidentally) apprehend the culprit, thus proving to themselves that they are very fine detectives.  Not only is it a funny story, there’s also comedy in the smallest details of the illustrations. 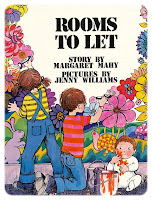 This is the story of Mr. Murgatroyd, a miserly landlord who charges ‘too much’ rent for the rooms in his house.  Gradually his ‘Rooms to Let’ sign attracts a motley collection of tenants: the wispy woman with a wooden leg; the man pushing his mermaid wife in a wheelbarrow; Mrs. Piper and her twenty children; and the bear who plays the flute.  Mr. Murgatroyd longs for his house to be quiet again and is convinced his tenants will soon be fighting, but they get on so well that they decide to leave together and find a cheaper place to live.  Only when he’s left alone does Murgatroyd realise that he misses everyone and decides to go with them.

I think it is the way that the characters take over the house which really captured my imagination.  The mermaid sings in the bath while mice sail paper boats across the flooded bathroom floor; Miss Wispy’s room resembles a jungle, crammed full of plants and vines; and Mrs Piper’s family paint colourful murals over the whole house.  The illustrations start in muted tones of brown and green and become more and more brightly coloured as the residents settle in.
****

Thank you very much, Nicola! What a great selection it is and no doubt a lovely trip down memory lane for many readers. I too was a great fan of Richard Scarry as a child! I bought a huge selection of them for my son when he was younger in the hope he would become a fan too. Thankfully, he loves them!