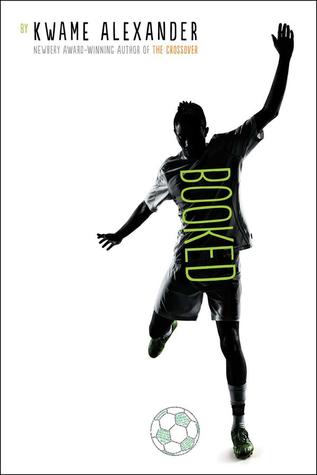 Nick Hall lives and breathes football, just like his friend Coby. His mum is sympathetic, but his father, an esteemed professor of linguistics who suffers from ‘chronic verbomania’, would rather he was his nose in books and forces him to read from a dictionary each night, deepening Nick’s resentment towards reading. But that is the least of Nick’s worries. At school, there is bullying,  falling behind with grades,  but also lovely April, with whom he can’t seem to start a conversation. Things are tough, but when his parents drop a bombshell, Nick’s life spirals even out of control.
Newbery winning verse novel The Crossover was one of my favourite books of last year and I was very much looking forward to this second sports-focused free verse novel by Kwame Alexander, this time featuring football. And what perfect timing to read it: in the midst of Euro 2016, and to coincide with the verse novel finally getting the recognition it deserves in this country thanks to the wonderful Sarah Crossan winning the Carnegie Medal (as well as the YA Book Prize AND the Irish Children’s Book of the Year) with One.
Here again, Alexander treats us to his energetic, fast-flowing free verse, taking the opportunity of Nick’s amazing ability with words to play wonderfully with language, using footnotes to explain unusual language, but never in a patronising or dull way. He juggles poetic forms and styles so astutely, incorporating rap songs, text messages and other forms as part of the main narrative. 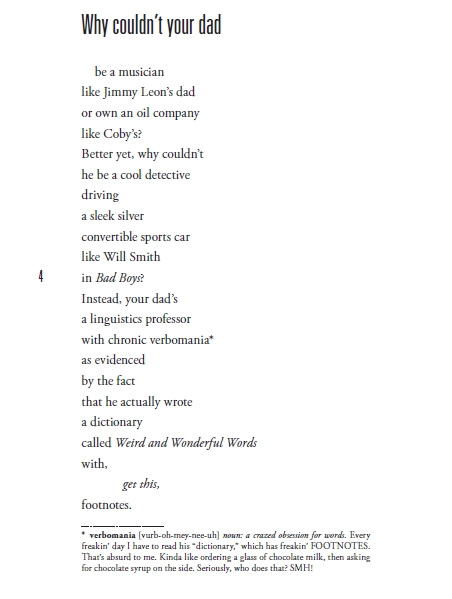 It is astounding how so much can be conveyed through such sparse text, and the reader gets all the benefits of a strong narrative without the endless descriptions that puts off so many. There is not quite as much action on the field in Booked as there was on the court on The Crossover; any basketball fan (yous truly included) will tell you how rhythmic, almost melodic, action on the court is, which begs for poetic description. Here, the focus is more on the ups and downs of Nick’s life both at school and home, but sports fans will still be able to relate. Nick is a particularly welcome character; boys can be a bit two-dimensional in books and here we have a very bright boy but who is very reluctant to show it. His attitude to books is one many school librarians will recognise. But he is vulnerable also, and the poetic form is accomplished at conveying that. Alexander’s crafty intertextual inclusions, including class famous verse novels, is a clever way to encourage his readers to widen their reading and ultimately a celebration of reading.  A football-mad boy, a short text: many will probably pigeon-hole Booked as a reluctant read, but don’t be fooled, this is an accomplished piece of writing to be enjoyed by all.