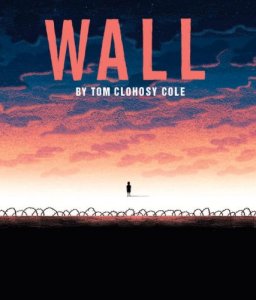 Today is the 25th anniversary of the fall of the Berlin Wall, a day that many of us remember vividly.
Wall tells the story of a family torn apart when, overnight, the Wall is made, with the Father stranded in the West while the rest of the family remains in the Eastern block. Desperate to be reunited with his father, the little boy begins to dig a tunnel, but just as they are about to cross, the family are found out by a wandering soldier, who, eventually  sympathetic to their plea, lets them through (this reminded me of the iconic photograph of the soldier jumping to the Western side)
Wall is told in first person narrative through the eyes of a child,  which is rather unusual for a picture book and allows the reader to delve deep into the story of this family, while bringing a certain sense of innocence to the tale. This is heightened by the minimalist text, which is straight to the point, as a child telling a story would be. Here, there are no politics of East versus West,  just a tale of separation , longing and hope. This is echoed throughout in the artwork and the way Tom Clohosy Cole uses colours: the darkness and shadows brought by the erection of the wall, in contrast with the light and warm colours of the other side.  Yet the final spread shows the opposite: Dad in the dark and the family in the light, emphasizing therefore that it is not which side of the Wall that you are that brings light, but being with your loved ones. 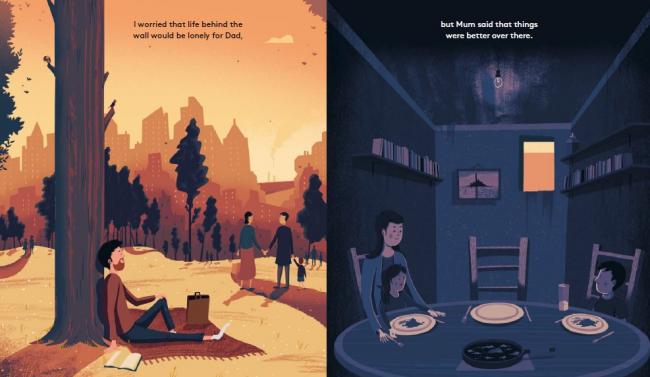 Despite its non-political stance, there are still glimpses of the Berlin Wall’s historical heritage within the pages, hinting at those who were shot while trying to cross, for example. This helps bring a good balance between reality and fiction. Wall is first and foremost a tale of hope, but it is important for those young readers learning about the Berlin Wall for the first time to know that not all were so lucky.

Wall is a visually stunning picture book which is particularly good at demonstrating the power of images in making sense of difficult subjects. Though the ending might sound a bit too improbable to some, it is appropriate in the way that it expresses that anything can happen when there is hope. After all, the Wall did come down, eventually, thanks to the power of people, and does not take away from the evocative power of this picture book.