There have been, and will continue to be, many booklists and book recommendations about World War I.
This is in no way an exhaustive list, but rather an attempt to highlight some of the titles available at the moment, beginning with my  ‘coup de coeur’, Five Children on the Western Front.

It is 1914 and Cyril, Anthea, Robert, Jane and the Lamb have grown up since their adventures with the Psammead; there has even been a new addition to the family, young Edie. But out of the blue he reenters their life, just before the turmoil of the First World War begins to impact them directly with Cyril on his way to fight in France. But the sand fairy seems to have lost his magic and is stuck in Kent with the children. They soon discover, with the help of the Old Professor and his assistant Bertie, that the Psammead has been hiding his rather dark past from them and that he needs to repent from his past errors before he can be free from his curse. As they learn more about his past, the full horror of the War unravels.
Five Children on the Western Front is a truly outstanding novel which takes the reader on an incredible journey of understanding and atonement.  For the Pemberton children, it is a journey towards understanding the War and accepting its consequences while for the Psammead, it is a journey towards understanding what he has done wrong and learning to care for and love others than himself. Both journeys are intertwined , all the way to its heartbreaking ending. Saunders crafts a multi-layered tale which manages to mix magic with the harsh realities of War, and along the way offers a potent commentary on how the First World War changed British society for ever: the change of status of women, the impact on social classes, and the legacy of War, with men coming home changed forever. The few magical trips in time unwittingly initiated by the Psammead allow the reader to get the right perspective to understand the impact of War on the world but also on the Pembertons and their acquaintances; particularly moving is the trip to the German Kaiser after the War, and of course the final trip, which leads to the denouement of the story, which will reduce even a stone statue into a bubbling wreck.
A truly magnificent novel, which does not necessitate having read Five Children and It to be enjoyed.

Stay Where You are Then Leave by John Boyne (Doubleday) is another novel which  focusses on the home front during World War I. When Alfie’s father leaves to go to war, Alfie is only 5 and is left to look after his mother. Through his eyes readers are witness to every day life in London during the World War and its impact on all who were left behind and addresses difficult issues such as the treatment of conscientious objectors and the terrible fate of soldiers suffering from shell shock in a sensitive and child-friendly-way.

Regular readers of Library Mice will know of my love for illustrated fiction, and there are have been two particularly stunning specimens published this year, both illustrated in tones of grey and splashes of red, making the impact of the artwork all the greater.

Damian Kelleher’s Dog in No-Man’s Land (Templar) is illustrated by Gary Blythe and tells the story of Billy, a soldier and Scruff the stray dog whom he rescues but who eventually saves Billy’s life. Soon Scruff becomes an ambulance  dog, with all the dangers it entails. Dog in No-Man’s Land is a story of bravery, friendship, loyalty and the terrible fate of soldiers in the Trenches. It also describes the role of animals in the the conflict and on the front line; readers will be well aware of the role of horses thanks to War Horse, but dogs were, and still are, vital in war zones. Blythe’s sketches are wonderful and create a dark yet not scary atmosphere, making it suitable for an intended audience of 9+. The book includes a series of envelopes which contains letters between Billy and his mother which enhance the reading experience, rather than being just gimmicky.  Well worth seeking out.

The Great War (Walker Books) is an anthology of eleven fictional short stories inspired by real objects from the First World War and is superbly illustrated by Red House Children’s Book Award and Greenaway Medal winner Jim Kay.  The list of contributors alone is enough to convince any reader that this is no ordinary anthology: Tracy Chevalier, Michael Morpurgo, Marcus Sedgwick,  John Boyne, Adèle Geras, David Almond and  Timothée de Fombelle to name a few. The objects that inspired them might seem ordinary but each evokes specific aspects of wartime life.  From the Victoria Cross to sheet music, from a soldier’s writing case to a toy soldier, each  tells a story of the profound mark the War has made on every day life.
Kay’s stunning artwork, sometimes very haunting accompanies each tale.
Photographs and information about each object is included at the end of the book.  It is a wonderful anthology for older readers.

One of the many things people usually know about the First World War and life in the Trenches is the famous Christmas Truce, and its football game. It is often used in children’s books because it conveys so well the absurdity of war. 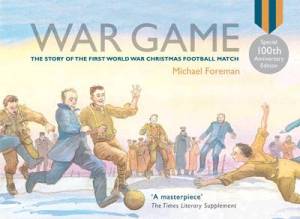 War Game by Michael Foreman (Pavillion) is a compelling picture book for older readers which mixes illustration and photographs and facts with fiction to create an unforgettable story  of four boys from the same village who join decide to join the army after a game of football; they go to fight in France, eventually ending up in the Trenches on Christmas Day where they  play a memorable game of football. Foreman’s watercolour artwork is beautiful, his use of colour depicting perfectly the mood of each episode. The ending is incredibly harrowing, but fitting.
First published in 1993, a new edition with added material has been published for the 100th anniversary of the conflict. 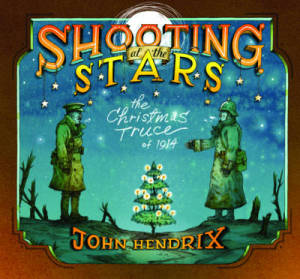 Shooting at the Stars by John Hendrix (Abrams) is another take on the Christmas Truce and while the artwork is much  more modern than War Game, and slightly graphic-novel like, the first person narrative  makes this an interesting read indeed. The book is written as a letter from young soldier Charlie to his mother, where he describes first the misery of the Trenches and the short-lived elation felt by the Christmas Truce. The first person narration helps to emphasise the hope that was felt on that day, and highlighting the humanity and kindness that can rise from even the darkest of times. Because of the artwork, this is a particularly good title to use with older readers.

Over the Line by Tom Palmer (Barrington Stoke) also marries football and the War but in a slightly different way. It tells the story of Jack, a talented young footballer whose dream in to play for England. When this finally happens, his victory is marred by calls for the team to join the army and fight. Talks about a Footballers’ Battalion and of the Flanders Cup give Jack the hope that he can both play fight for his country and continue to play football. But as the conflict continues, Jack is dragged into the horrors of the War. Based on the real life story of footballer Jack Cock, the narrative in this short novel is powerful and evocative. The emphasis on football will  entice readers who might not think at first that historical fiction is “their thing”. The compelling voice of Jack will undoubtedly prove them otherwise.

Line of Fire by Barroux (Phoenix Yard Books, and translated from the French by Sarah Ardizzone) is an incredible graphic novel, with an extraordinary story. Barroux found the diary of soldier during World War I by complete and utter chance, and rescued it from the rubbish. There was no name, and the diary ends abruptly, covering only the first few months of the War. There is no way of knowing what happened to the soldier; making him is truly an unknown soldier. Barroux adapted the diary as faithfully as possible into this graphic novel, making it a primary account of the first few months of the conflict from a French point of view – the transformation from civilian to soldier, the early fears and horrors of the battlefield, staying in a hospital after being wounded.
Its abrupt end conveys perfectly the fragility of life in conflict (though we don’t know whether he perished at that point). The rough feel of Barroux’ sketchy artwork and the lack of colour work together to express perfectly the desperation of those times. The graphic novel is the perfect media to translate the soldier’s diary in the most effective way and will speak to all audiences.

Source: review copies from publishers and personal copies (Stay Where You Are Then Leave, War Game)