Here are a few titles for newly independent and more fluent readers which will suit Halloween-themed reading. 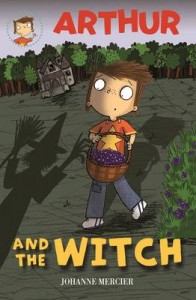 When Arthur find a secret hoard of blueberries at Picket Lake, he decides to pick some as a surprise to his grandma and eat a few along the way as well. But when the family discovers where Arthur found them, they become  really worried. There is a witch living at Picket Lake, and she is going to be really angry when she realises Arthur has stolen her blueberries.  Cousin Eugene has a plan to tame her anger, but is it too late already?
Arthur and the Witch is book five of a great little series for newly independent readers which comes from Québec. Short and simple, yet engaging and fun, this is a perfect series for children to try to attempt on their own. The illustrations help break the text and help set the humorous atmosphere.   Arthur is a loveable and quirky character who will appeal to both boys and girls. Arthur and the Witch is perfect for Halloween, touching on the scary witch theme but remaining light and fun throughout.
(5+) 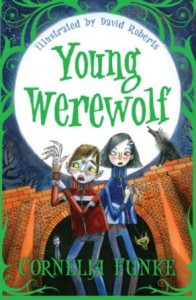 Matt is on his way home from the cinema with best friend Lisa, when they encounter a yellow-eyed monster at the end of a tunnel which bites him. Matt’s whole world changes then as he begins the transformation into a werewolf.  Panicked at first and hounded by his chemistry teacher Mr Foulweather, he eventually seeks the help of his teacher Mrs Ruskin who alongside. They have two days to find a cure before the curse takes hold forever.  With gorgeous artwork (particularly the rather splendid cover) by David Roberts and plenty of dotted humour along way, this is a great werewolf story with a strong message about the importance of friendship as well.
Barrington Stoke specialises in accessible titles, and with a reading age of 8 but interest age of 8 to 12, this short book will be enjoyed with children who struggle a bit with reading, but not only. Like all Barrington Stoke books, Young Werewolf  can be and will be enjoyed by everyone.
(8+) 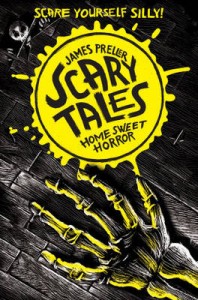 When Liam and his family arrive in their new home, straight away he gets a bad feeling about the old derelict house his dad has bought. Even the dog acts like she is scared of the house. But his dad won’t hear of it, as he sees this move as a “new start”, particularly after the passing of Liam’s mother. But when his sister and her friend try to summon a dead spirit, things take a turn for the worst, and it becomes obvious nasty things are indeed lurking just behind the walls.
This actually quite scary tale is part of a series for young readers which will be perfect for readers who like to be given quite a fright.  It is perfect for as a stepping stone to the slightly more meaty Goosebumps.  Lots of activities are available on the official website too.
(8+) 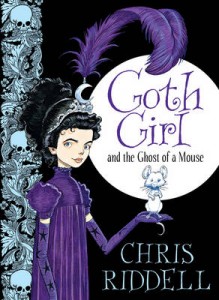 Readers who like the Library Mice household have been heartbroken by a distinct lack of new Ottoline books in the last couple of years will have been delighted to see that Chris Riddell has written a new book for young readers, and the first one in a new series too: Goth Girl and the Ghost of a Mouse. Hurrah!  When Ada wakes up in the middle of the night to find the ghost of a mouse at the end of her bed, she is more curious than scared.  Ada is rather lonely, living in the huge house that she shares with her rather eccentric father Lord Goth, and so she befriends Ishmael. This new friendship leads Ada to many discoveries, including some very dark secrets about the annual Metaphorical Bike Race and Indoor Hunt which is so dear to her father. Can Ada and her new-found friends foil the awful plot unfolding and save the day?
Witty, clever, warm and unashamedly wacky, Goth Girl and the Ghost of a Mouse is just splendid. With its crazy inventions, its magical creatures, its unrepentant villains, and friendship  and family love at its heart, this tale will be enjoyed by all, whether are boys, girls, 8, 38 or 99. Riddell’s artwork is a an absolute joy and he truly is a master of illustrated fiction, with the artwork  playing a crucial part in the narrative, and telling its own story as well. A little chef d’oeuvre, simply.
(8+)