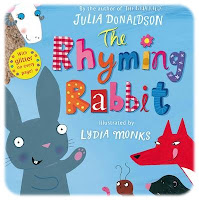 The Rhyming Rabbit might have a way with words, always so inspired that he can’t help blurt out a sonnet or limerick, but the other rabbits are certainly not seeing it that way. Especially when he always seems to be at his most creative at the most inconvenient times! Feeling rather unappreciated and alone, the Rhyming Rabbit decides to leave and find more understanding friends. On the way he meets many woodland creatures but none seem interested in his talent … until his quest for a friend brings him to a field where he comes across an unlikely companion who might just share his rhyming habit! 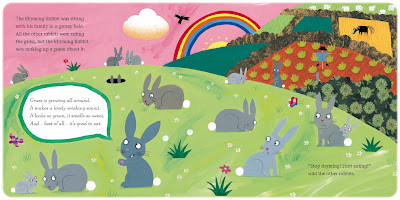 This new picture book from award-winning duo Julia Donaldson and Lydia Monks is another roaring success. Donaldson’s unrivaled way with words is showcased to perfection as our lyrical rabbit spurts out poem after poem. Lydia Monks’ vibrant artwork supports this beautifully, using bright colours and collage and of course glitter on every page, as the front cover page states. Now I am not a glittery type of gal, and I don’t think that The Rhyming Rabbit would be any less of a success if the glitter wasn’t there, but it is a nice touch. Similarly to What The Ladybird Heard and Sharing a Shell, the glitter is used sparsely enough. In this instance, it is used primarily to highlight the speech bubbles which include the rhyming text, which I think is a lovely touch. 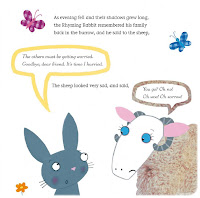 As well as a great introduction to rhyming verse for younger readers (as the rest of the book, unlike many of Julia Donaldson’s texts, this is one is not written in rhyme in its entirety, highlighting the passages which are), The Rhyming Rabbit carries a lovely theme not only on the importance of individuality and staying true to oneself, but also about appreciating the nature around us. There is something really endearing about the rabbit’s insatiable enthusiasm for everything around him. This might make him slightly irritating to his fellow rabbits, but it is certainly makes him a great little picture book character. One can never have too much positivity at that age, and for this and many other reasons, The Rhyming Rabbit will undoubtedly join What The Ladybird Heard as a household favourite. 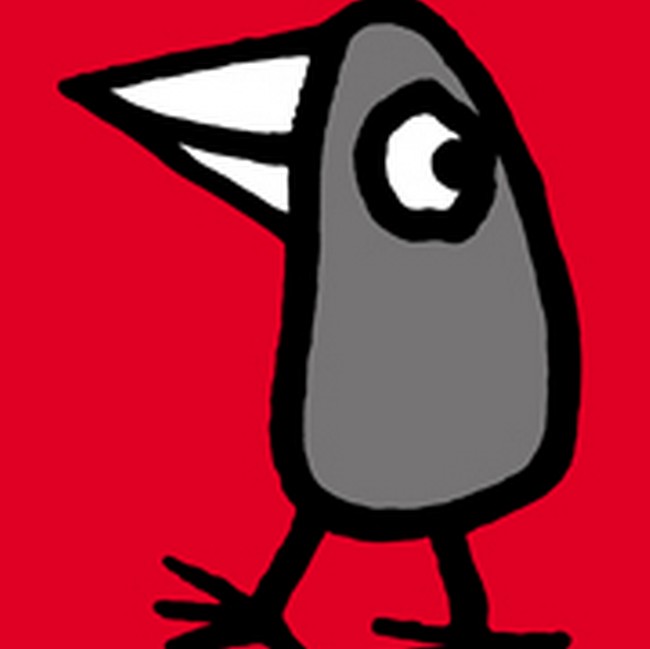