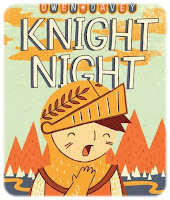 When it is time for bed, little knights are just like ordinary little boys: this knight might be climbing mountains, fighting monsters and crossing crocodile-crowded rivers, but at the end of this treacherous adventure, he too must brush his teeth and eventually switch off the light.

I had loved Owen Davey’s first book, Foxly’s Feast, which was published to great acclaim (see my review here). This is his second children’s book and his distinctive style effectively brings to life a tale which is simple yet brimful of detail and adventure.
One of the strengths of the book is how the author plays with the boundaries between reality and fantasy. The knight is obviously the little boy’s imaginary alter-ego, and little readers are given a clue about this in this double-spread at the very beginning of the book: 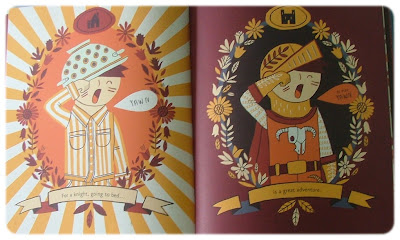 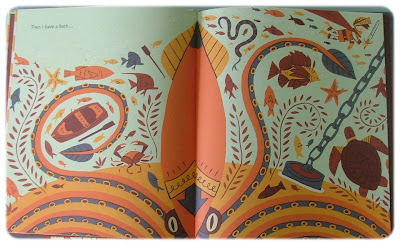 This will allow young readers to not only catch a glimpse of what is really going on, but also to make a link with their own routine. It is very clever, and very subtly done.
The text is sparse, which will allow very young children to access the story. For slightly older children, the fun will be in “reading” the pictures, keeping them fully engaged, and therefore the short text will not be a put-off.

The palette of colours used by Owen Davey, is as in Foxly’s Feast, striking and original, especially for a children’s picture book. It is limited, with shades of brown and orange and a variety of warm colours. The effect is not only beautiful, but also particularly fitting for a bedtime story, as those tones ooze a relaxed mood.

Knight Night is a great bedtime story which will be perfect for little boys and budding knights.
But not only boys : my daughter has been so taken by the play on words in the title that she has adopted it as one of favourites of the moment!

If you like retro style illustrations and unusual picture books, be sure to check out Owen’s books. Templar most definitely have flair for fantastically original illustration, and what a pleasure it is to discover such books.

You can also have a look at Owen’s other design work on his website.

Many thanks to the good people at Templar for sending me a review copy of “Knight Night”.