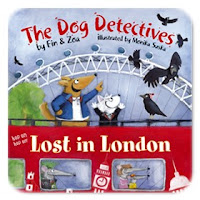 London is in trouble and the Dog Detectives have been called upon to help! The six black ravens who reside at the Tower of London and according to legend protect the city by their presence, have disappeared and for Detective Jack and Deputy Poco Loco, it is a race against time within the streets of London to try to find them as soon as possible. Will this be another successful enquiry for the two clever pooches?

Lost in London is the third in the series Dog Detectives. Other titles include An Outback Odyssey and The Great Grizzly North. Authors Fin and Zoa travel the world on their bikes with their two dogs, Paco and Jack. Their own adventures have inspired them to write the Dog Detective stories.

Lost in London  is a really sweet book which I think will be really enjoyed by its targeted audience. The text flows well with some lovely rhyming sequences. The artwork is vibrant and offers a  detailed yet child-friendly portrayal of central London. 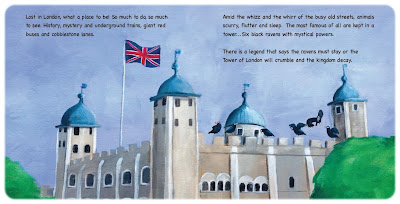 Detective stories are a great genre that many children enjoy once they become independent readers, and this is a gentle, well-pitched introduction for a younger audience. Little readers are encouraged to help find the ravens by trying to work out what the riddles mean as well as look for clues by looking more closely at the illustration. This will create not only interaction with the story but also with the adult readers, as they collaborative try to work it out. I think it is great when picture books involve the readers in the development of the story and its eventual resolution, and Lost in London does this well. 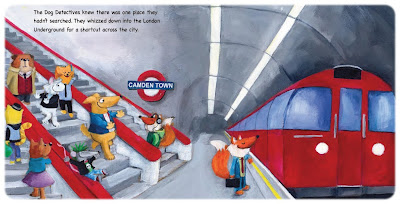 I think Lost in London will also be a fantastic book if you are planning to take young children to London for the first time. Many of London’s landmarks make an appearance in the story: the Tower of London of course, but also, amongst others, the London Eye, Big Ben and Trafalgar Square (although Nelson is looking distinctively canine here!) as well as the Underground, which can be incredibly daunting for children at first. Using this book before a visit will help make it a little bit more familiar, and of course you can then have fun spotting the landmarks seen in the book once you get there! In fact, there is a double spread full of London facts at the end of the book, which I thought was really well done.

Lost in London is a fun, entertaining read, and well worth having a look as an introduction both to London and to the detective genre.

Many thanks to Maverick Children’s Books for providing a review copy of “Dog Detectives: Lost in London”.