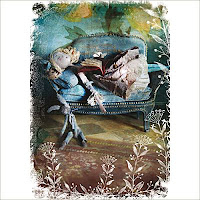 I am not a particularly girly girl most of the times, but there are a handful of illustrators that for some reason manage to reach out to the (much hidden) princess inside me. One is of them is British illustrator Sarah Gibb, and the other two are French: Cathy Delanssay and  Miss Clara, who is finally being published in the UK.

I first came across French artist Claire Guiral, aka Miss Clara, not through the books she has illustrated, but through the range of stationery she creates for La Marelle, which I very much urge you to discover (though I take no responsibility for any addiction that might ensue).

Miss Clara’s artwork is stunning and sophisticated, working entirely with paper, which she uses to create maquettes. She meticulously prepares the paper before working on it by folding, creasing, dyeing,  manipulating it, then sews it together and paints it to create her trademark delicate characters and other intricate objects. She then adds trinkets and other well chosen objects to the scenes before taking photographs before adding the finishing touches digitally. The result is magical and fantastically atmospheric.

In the short  French film below you can discover how she works, as well as the amazing world she has created in her own home (yes, that is her house! You can see more photographs here, it is well worth a look)

It is easy to see why Miss Clara’s style lends itself so well to illustrating eighteen-century fairy tales. The enchantment and darkness of fairy tales are conveyed in the artwork with a rare intensity.

Her first illustrated book for Magnard Jeunesse in France was indeed a fairy-tale, Peau d’âne, by Charles Perrault; a tale much loved in France but very little known here. 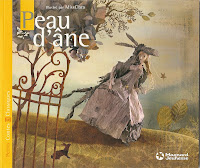 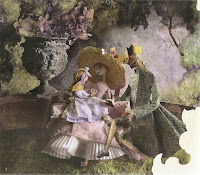 This was followed by La reine des glaces (The Snow Queen) and Le bal des douze princesses (Twelve Dancing Princesses), both at Gautier-Languerau. These two books have just been published by Barefoot Books in this country,  though interestingly as chapter books as part of their Independent Readers line. The texts have been rewritten by British writers (which is why I didn’t feel it fitted my French Friday feature, just in case you were wondering!)

When her best friend Kay is taken away by the evil Snow Queen and kept captive in her ice palace, Gerda takes it upon herself to go and  rescue him, despite the many dangers she faces along the way. On her way to the far North, Gerda does indeed encounter many difficulties and  challenges, her pure heart and her love for Kay help her to outwit the Snow Queen and save her friend.
This much abridged version of the original tale is a great introduction to the world of fairy-tales for newly independent readers. The vocabulary is quite advanced and the text challenging at times, and therefore despite being quite a thin little book it will be particularly suited to those readers who have built some stamina and confidence in their reading, as stated on the back cover by the publisher.
Miss Clara’s scenes atmospheric scenes and the play on colours really heighten the opposites between the Snow Queen and her world (blue, white and other icy colours) and anything to do with Gerda (red, pink and other warm colours). 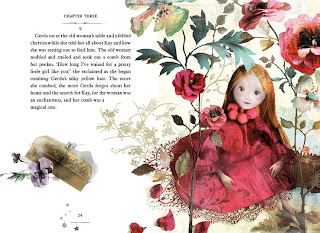 The Twelve Dancing Princesses
text by Mary Hoffman, retold from the original tale by the Brothers Grimm(Barefoot Books)
When his twelve daughters’ slippers are found in rags and tatters every morning, despite the fact that they should be unable to leave their rooms unnoticed, the King faces conundrum; where do they go, and what are they doing there? To help him solve the mystery, the King promises his kingdom to anyone who can work it out within three days and three nights. Many try and fail, until a dishevelled soldier arrives at the palace’s doors. Will he be the one to succeed?

This story of the poor soldier who manages to outwit the clever royal sisters is one of my favourite fairy-tales. and its opulent ballroom scenes and lavish dresses lend themselves particularly well to Miss Clara’s style. The attention to detail in the gowns is outstanding and this book really showcases Miss Clara’s incredible talent.  Many of the spreads are quite dark, focusing on the mystery and magic of nightfall, adding to the secrecy of the princesses’ destination. Again the vocabulary and text structure is best suited to confident readers, but Mary Hoffman’s text remains accessible and is beautifully told. 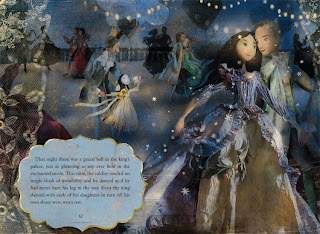 The Snow Queen and The Twelve Dancing Princesses are two very different fairy tales who might attract diverse readers. The former is a prime example of the darkness that lurks in many of those traditional tales, whether the former focuses very much on romance and magic. However both provide modern retellings which will appeal to young readers. They are worth acquiring, even if you already have versions of those tales, just so that you can pore over the striking artwork.
All illustrations  © Miss Clara
Source: review copies from publisher