My husband told me once that the reason he never read as a child is because he was unable to stay in the same place without moving  long enough to go through a whole chapter of a book. To him, reading was too passive, too uneventful. His mind would wander off within minutes and he would find himself itching to be elsewhere, doing “something”. He wasn’t a struggling reader, he was just a non-reader. I guess this is a story that will be familiar to many, especially those who are parents to boys.
Bearing all this in mind and my own experience with  my very able but sometimes very reluctant son, I was amazed when I discovered this new series from Nosy Crow. I suspect publishers have always struggled to find a book or series that would attract these disaffected readers and this is certainly like nothing I have seen before! It manages to merge narrative, supported heavily by comic-style illustrations, with an an opportunity for the reader to get actively and creatively involved in the story by offering lots of spaces to doodle and draw their own bits to the story. What a refreshing and open-minded idea! The series includes two titles so far:

Romans v Dinosaurs on Mars
Romans and Dinosaurs live together in a huge glass dome called Romasauria on the planet Mars. But there is no love lost between the two, and rather they love to compete against each other … until their world is threatened by the imminent arrival of a huge asteroid which heading straight for Romasauria. Will they put their differences aside to try to save themselves?

Robots v Gorillas in the Desert Somewhere in the desert, gorillas trade oil for bananas grown by robots. But when their two leaders meet and King Well-Hairy ends up accidently slightly electrocuted, the gorillas and robots decide on a win-or-lose-all race in the Desert of Doom. Who will win this insane race?

The books still have a similar format to novels with chapters, and use a very limited palette of colours in the illustrations which I think is particularly effective as it is more inviting for the reader to draw in.
This is exactly what reluctant boys need – a different, less passive reading experience which combines wacky and funny short stories combining high-interest subjects for boys (soldiers, dinosaurs, robots!). But it is not only for reluctant readers; in fact I think this would be a shame if it was relegated to being just a book for reluctant boys as I think any child who loves drawing and doodling will love this! For example this double-spread (which appears in both books) gives great advice about drawing and  will encourage  budding artists to try something new with their drawing techniques: 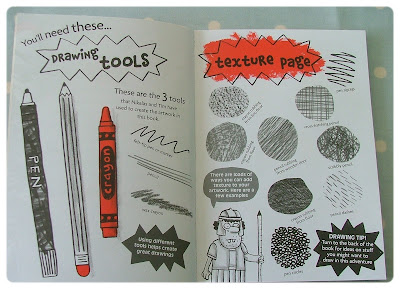 As predicted, my son was hooked straight away. He had had a first taste of interactive books with a “choose your own destiny” type Doctor Who book but he loves drawing so he got his pencil out as soon as he could (literally, that’s his PE school uniform he is wearing on the picture!): 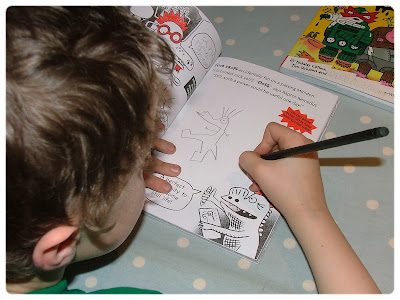 And here is a snapshot of what he drew (he loves drawin but rarely colours in anything!): 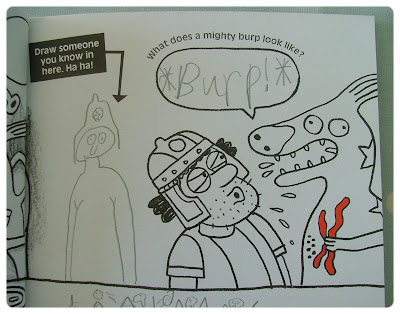 Seriously, check this out this series, whether your little readers at home are reluctant, struggling or more than willing! This is exactly the kind of books us parents need to be able to hand in to our offspring in school holidays or on a long car journey!