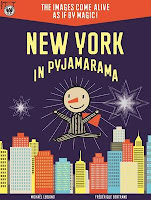 A little boy is going to bed, but he is not quite  ready to go to sleep. Instead, thanks to his very special  striped pyjamas,  he goes on a magical whirlwind tour of New York,  the city that never sleeps; from the busy airport runway to the dazzling lights of Broadway, you are invited to join him on his journey and watch the book, literally, come to life.

New York en Pyjamarama was the fastest selling picture book of 2011 in France, eventually selling over 100,000 copies, and it is not hard to see why. Created by illustrator Frédérique Bertrand and animator and writer Michaël Leblond, the book is animated thanks to a technique called Ombro-cinema which uses a piece of acetate to bring to life the pictures.This is achieved by the lines embedded in the design mixing withe lines on the acetate, which create an illusion of movement. This technique originally dates back from the early twentieth-century and yet it feels new and innovative. In a world where children are used to CGI, 3D and all the rest, it is marvellous and heartwarming to be able to present them with a book that can surprise and bewilder them. My 10 year-old son’s reaction said it all: it was a simple and genuine “WOW”.

The rhyming text and quirky graphics, all in primary colours, make the story entertaining and great to read aloud. Teamed with those fabulous animations, they create a superb picture book which really is like nothing you are likely to have seen before. You can watch it come to life in the video below:

I think only the video can truly convey how ingenious and utterly clever this book is. The leaves in Central Park shivering in the breeze are just amazing.

New York in Pyjamarama is an homage to Little Nemo, created in 1911 by Winsor McCay, and was another little boy whose dreams also came to life.

It is truly inspired book which will delight avid readers, but also those who might be a bit reluctant: the interactivity is guaranteed to hook them in.

Without a doubt, New York in Pyjamarama is in my top ten of picture books published in 2012. Pure joy!

Source: review copy from the publisher