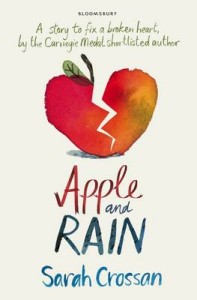 Apple has been brought up by her rather strict Irish Catholic grandmother after her mother walked out on her one doomed Christmas morning. Since then she has not stopped hoping that one day she would return. When she eventually returns, out of the blue, it could not be at a better time: Apple is facing tough times at school and she feels that her free-spirited and young-at-heart mother will understand her better than Nana ever could. But the homecoming soon turns bittersweet, with her mother turning out to be as unreliable as Nana had warned her, though Apple refuses to face the truth, until a surprising encounter, and an inspiring English teacher, show her otherwise.

Sarah Crossan enchanted readers with her beautiful verse novel The Weight of Water a couple of years ago and she is back with another novel where poetry again takes centre stage.  Though Apple and Rain isn’t written in verse, there are many poems included in the text, some part of the literary canon, some written by Apple, and similarly to the boy in Sharon Creech’s Love That Dog, discovering and writing poetry helps Apple to make sense of her feelings, herself  and her life.

Apple and Rain is tough to read at times. In the same way as with Jacqueline Wilson’s The Illustrated Mum, one almost reads between one’s fingers at some points, dreading what is, of course,  inevitable. After all, real life is no fairy tale, people don’t change at the stroke of a magic wand. But though it is heart-breakingly sad at times, Apple and Rain is not without hope. It is about love and redemption and the stumbles along the way. Though Apple’s problems with her mum might be unusual, she also has to deal with the regular woes of being a teenager: friendship troubles, bullying, first crushes and yearning for independence.   There is light-hearted fun as well, much of it thanks to Del, who is cheeky in the most endearing way. And then there is wonderful Apple’s English teacher, an unassuming John Keating type character who sees her potential and gives her the encouragement she needs. Poetry is a hard subject to sell, and it is wonderful to see such an inspiring teacher, and to see the use of poetry in lessons portrayed in such a positive way.

Apple and Rain is a wonderful feel-good kind of book, the kind that doesn’t offer you an unrealistic happy ending, but rather an ending which leaves the reader full of hope. It is the type of book that I close after the last sentence and hug for a little while before letting it go. And it has rekindled my interest in poetry, which I had lost years ago.  A wonderful book indeed.