Like many children’s book enthusiasts, I welcomed with much excitement and trepidation the news that Sarah McIntyre and Philip Reeve were going to collaborate on a new series for Oxford University. The result, Oliver and the Seawigs, does not disappoint (you can see my review here). 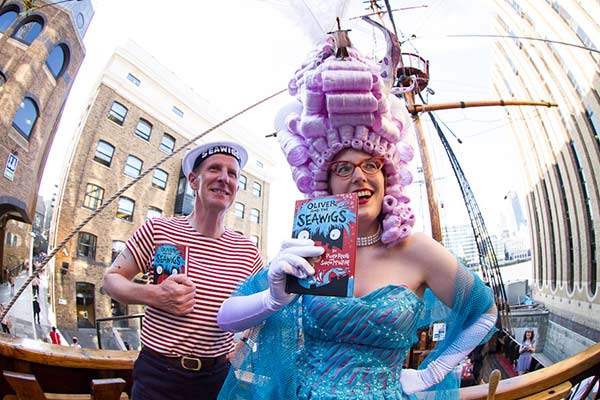 But I wanted to know how their collaboration came about and how writing together had gone.

So over to Philip first:

A lot of people who know my earlier books, like the Mortal Engines series, seem surprised that I’ve written something as light and funny as Oliver and the Seawigs. But I started out as a comedy writer, doing sketches and plays when I was at college, and then producing cartoons for Horrible Histories and Murderous Maths. I love silly ideas and cheap jokes! I think almost all my books are basically funny books, although obviously in Mortal Engines and Fever Crumb the comedy is quite black, and there’s other stuff going on as well. (Only Here Lies Arthur would qualify as a ‘serious’ book, and even that is based on a funny idea, I think.)

So I’ve always liked being funny (or trying to be) and one of the things that first drew me to Sarah McIntyre is how funny she is, both in her work, and in person. Just read her comic Vern and Lettuce, the everyday story of a sheep and a rabbit who live in a tower block full of other animals in south London. The ideas come thick and fast, and they’re so off-the-wall that it’s very hard to tell where they’re coming from. What are your influences McIntyre? No one knows. She’s an original.

When I first got to know Sarah, I never thought we’d end up working together. Her stuff seemed so much lighter and sunnier than mine! But we had such fun talking together, discussing our childhoods and the things we loved and throwing ideas around, that we just couldn’t help doing a joint project. Oliver and the Seawigs is partly based on a sea-fantasy idea which I’d been mulling over for ages, but it’s had a huge injection of Sarah’s sense of the absurd, especially the very McIntyresque idea of islands wearing wigs.  I did most of the actual writing, but I think the ideas I used are a 50/50 mix of Sarah’s and my own. It’s hard to tell though, because when you work closely with somebody you can’t always point at a particular joke or image and say ‘that’s mine’ or ‘that’s hers’ – they are ours, and they would never have happened if we had been working separately.

I’d recommend a collaboration like this to any writer. It doesn’t necessarily mean that I’m going to stop doing darker, older books, but there’s a danger, as you write more and more books, that you become set in your ways, sticking to the same ideas and processes. Working with someone else is a way to let some fresh air in, to try out new ways of working, to make yourself to do something different. And, best of all, it’s FUN.

And now over to Sarah: 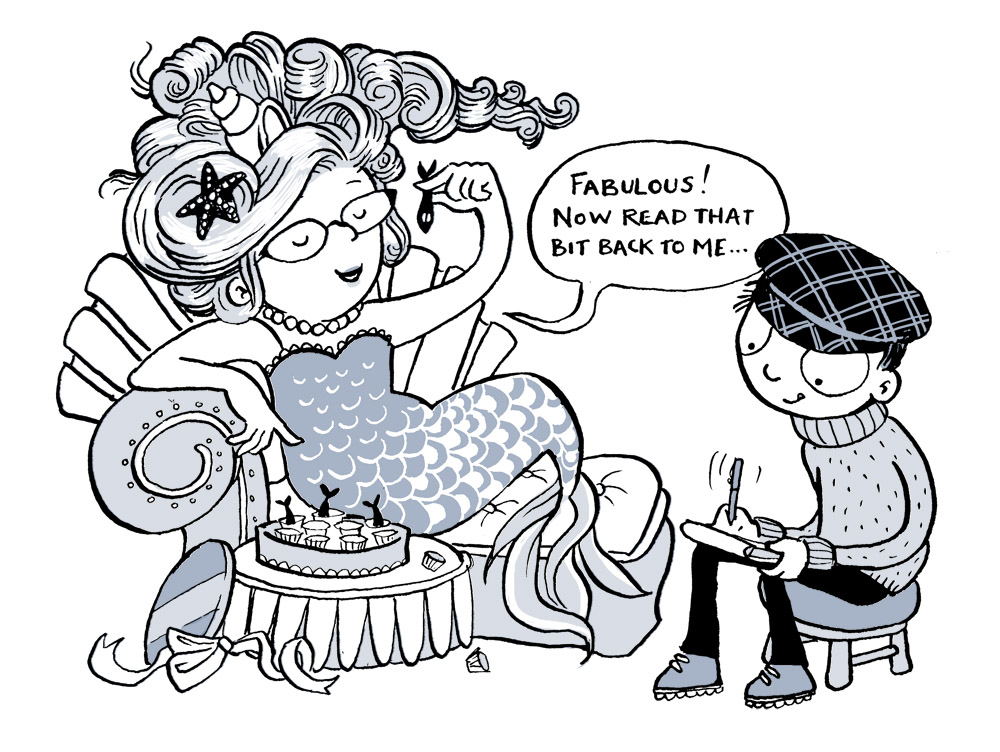 How fabulous!
Thank you so much, Philip and Sarah!