We really, really, love Mini Grey’s books in the Library Mice household. We discovered her work thanks to Traction Man (see a review of the latest instalment, Traction Man and the Beach Odyssey, here), and we were hooked. From Biscuit Bear to Three By the Sea (see my review here), we have enjoyed them all. This year Master O. had to bring a poem to school and he took in Mini’s illustrated version of Jim (see review here). Her latest book, the fantastic Toys in Space (see my review here), has just been released.
So I am very, very happy to welcome Mini to Library Mice for a Fabulous Five feature. 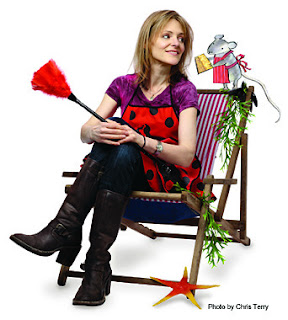 Mini Grey was given her name after being born in a Mini in a car park in Newport. She studied for an MA in Sequential Illustration at Brighton under the tutelage of John Vernon Lord. Mini also worked as a primary school teacher in Oxford, where she now lives. Her first published picture book was Egg Drop. She has won the Nestlé Children’s Book Prize Gold Award for Biscuit Bear, the Boston Horn Book Award for Traction Man is Here, and the Nestlé Children’s Book Prize Bronze Award and the CILIP Kate Greenaway Medal for The Adventures of the Dish and the Spoon . As well as writing her own books, she has also illustrated others, such as Dick King-Smith’s The Twin Giants and Hilaire Belloc’s Jim.
Mini Grey  was chosen as one of Booktrust’s Best New Illustrators in 2008.

There you are, cosy as pie, curled up with a nice picture book…and then, all of a sudden, BAM! You find you’ve fallen inside it. These books all seem to pull off this exhilarating trick, and come to life in your hands. Some actually deconstruct themselves in front of you. They all are fabulously and ingeniously illustrated. 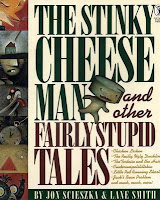 The Stinky Cheese Man
Jon Scieszka (text) & Lane Smith (illustrations)
A book of crazy subverted fairy tales gets pulled to pieces, managing to save itself in time through the power of collage. I particularly love Lane Smith’s illustration of the Stinky Cheese Man himself, with wafty aroma, round stuffed olive eyes and bacon rasher mouth. 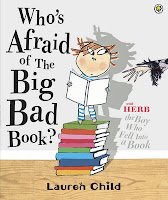 Who’s afraid of the Big Bad Book
Lauren Child After an exhausting play session with his friend who is staying over, Herb inadvertently falls into his own fairy tale book – which he had vandalised quite badly in younger days, cutting out some characters and giving others moustaches. The inhabitants are not amused. I love the gatefold spread where Herb has trouble opening an enormous door because “the illustrator had drawn the handle much too high up,” and the telephone stickers that Herb has added to every room. 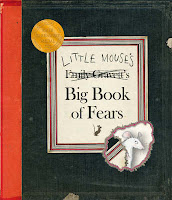 Little Mouse’s Big Book of Fears
Emily Gravett This book is lovingly and authentically battered. A trompe l’oeil receipt on the back describes its condition as “poor, scribbled in, rodent damage.” Little Mouse wanders petrified through his own book, nibbling on a rapidly disappearing pencil. Every page is crammed with fabulously dilapidated ephemera and nibbled textures. I particularly love the pull-out map of the Isle of Fright, and also the beautiful spread where Little Mouse is nearly whirled down a plughole – but saved by his pencil. 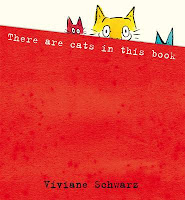 There Are Cats In This Book
Viviane Schwartz

What a brilliant idea – a book that talks to you, gets you to play with it, to blow on it, and throw wool in it. In fact – are you actually being played with by the book, rather than the other way round? There is some seemingly effortlessly simple but inspired paper engineering. And there are boxes – lovely boxes – everyone loves boxes (especially cats.) 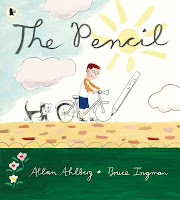 The Pencil
Allan Ahlberg (text) & Bruce Ingman (illustrations)
A book which draws itself in front of your eyes. The Pencil starts off alone but draws itself family and companions, including Kitty the charming paintbrush. But then mayhem is unleashed when the pencil draws an Arthur Mullard-style thuggish rubber – and the powers of oblivion run amok. It is particularly lovely that everything has to have a name, even the boiled egg (Billy) and a whole column of ants (Alice, Alvie, Abraham, Amy, Araminta, Alberic, Algernon, Anastasia, Ada and Allan….in case you wanted to know.)
****

Thank you so much to Mini for this inspired selection, which includes many favourites of the Library Mice household. The Stinky Cheese Man is a fantastic picture book for older readers too.