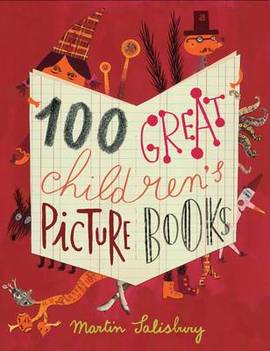 Note the title: 1oo GREAT Children’s Picture Books, not 100 BEST Children’s Picture Books. In this tome, it is clear Salisbury indulges his love for illustration and at the same time treats us to some fascinating, and for many, unknown picture books. Indeed he quite happily admits to the subjective nature of his selection in the introduction of the book, emphasising that the aim of his selection is “to deliver a visual feast for those who love the picturebook”, and that he has made his selection therefore on “rather un-academic, unscientific criteria, ultimately based on the ‘wow factor'”. Therefore although you will find the odd classic picturebook (The Tiger Who Came to Tea, Peter Rabbit)  and  some familiar contemporary names (Jon Klassen, Maria Altés, Beatrice Alemagna, Laura Carlin), a large proportion of the books featured will be little-known or even unknown to most readers. Even some of the big names who do appear (Sendak, Burningham, Ungerer) do so with lesser-known titles than the ones we are used to see in such selections.

Hopefully people will not grumble about the absence of ‘favourites’ or ‘classics’, and rather embrace what is a fascinating and rather incredible selection which blurs the boundaries between children’s illustration and art (if there ever was a boundary to begin with). What is to be applauded also about this selection is its multiculturalism. Britain is still so painfully insular when it comes to children’s publishing, and we are treated to a real glimpse of what is happening beyond our shores. I, for starters, I am glad to see  many Asian illustrators inside those pages, whose innocent, child-like artwork I find fascinating, including my favourite, Komako Sakai.
The notes on each book are informative and anecdotal; 1oo Great Children’s Picture Books  is not an academic book, but is aimed at all picturebook enthusiasts; whatever path have led them to this book, it will be equally as intriguing for erudites as it is for novices.