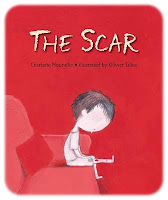 When his mother dies of what appears to have been a long illness, a little boy is left alone with his grief-stricken father, and struggling to make sense of the void that his mother’s passing has left behind. He closes the windows so the smell of her does not escape, he closes his mouth and ears so the memory of her does not leave him. But it is only when his grandma tells him his mother will never really leave him, as she will forever be in his heart, that the little boy can finally start to heal his wounds. 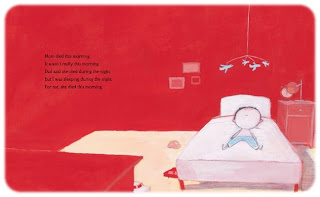 This painfully and poignantly honest account of one little boy’s journey through grief is beautifully told and utterly heart wrenching.
Tallec’s artwork might look simple and uncluttered, but it is incredibly evocative. His pencil illustrations mixed with watercolour (almost entirely in shades of red and touches of yellow) help convey the feelings of the little boy while he embarks on his emotional journey, a journey that takes him from anger, to denial, from inconsolable grief to finally sad acceptance. The text is harsh, at times brutally so, but because it is narrated by a child, it is simply realistic, as this is how children see the world around them. But it also dotted by some gentle humour, as again children’s honesty and way of looking at the world often results into them saying some fairly funny things.
What makes The Scar stand out from many of the books on this subject is how raw the emotions depicted in the story are. But how best to describe losing a parent from a small child’s point of view? One could be shocked by hearing a child say “good riddance” upon hearing of their mother’s death but how comforting for a child finding himself in the same desperate situation, feeling the same conflicting feelings of loss and anger, to see that it is ok to feel that way? The Scar could possibly be seen as an equivalent to Patrick Ness and Jim Kay’s A Monster Calls (see my review here) for younger children. It is raw and somewhat aggressive, but at the heart of this compassionate tale is simply the unbearable truth of a child losing his mother.
It is without a doubt a book that cannot leave you unmoved, and one that every school should have on hand to explain grief and loss.

Interestingly, the original French title, La croûte, means “the scab” rather than “the scar”.
Please take a few minutes to discover Oliver Tallec’s work. He is one of my favourite French illustrators, and much loved and appreciated in France for his work and particularly for being half of the duo responsible for the very amazing Rita et Machin, published here under the name Rita and Whatsit.


Thank you to Walker Books for sending me a review copy of “The Scar”.